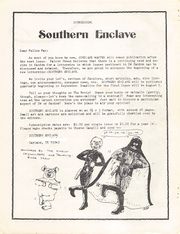 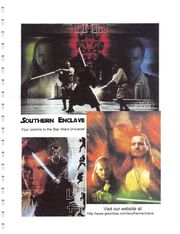 a 2001 print flyer included in Millennium #1

Southern Enclave is a long-running Star Wars gen letterzine that was published by Falcon Press from 1983 to 2000. There were 54 issues. Each issue ran about 60 pages and was published quarterly.

Online scans can be found here.

Southern Enclave contains detailed, long essays, meta, and articles, occasional art, zine and book reviews, and many, many lengthy letters commenting in great detail about past issues and their contributors. Topics included race relations, religion, feminism, droid rights, the struggle of heroes, human rights, the nature of clones, the cost of war, as well as the minutia of the films themselves. At times, the discussion became quite heated, and the editor and others would plead for cooler heads.

From the website that houses many of its issues scanned as a pdf documents:

What's 'Southern Enclave'? From 1984 until 2000, SE was a long-running and award-winning letterzine dedicated to all things Star Wars. It was published as a place where SW fans could meet and discuss their favorite movies in a time before there was an Internet. Fifty-four issues of SE were published and are long out of print. In 2000, I decided it was time to end the print zine and go online. The Southern Enclave mailing list was established on Yahoo! Groups.

Click on the links below to see more information about individual issues of Southern Enclave.

From Kessel Run #4: "We invite your Locs, reviews of zines, short articles, ads, zine listings,con announcements, consumer news, etc. for our SW Ietterzine. SE is published guarterly and welcomes all thoughts on The Movie or other SW related subjects, but please let's keep the name-calling to a minimum.

Editorial from the first issue:

Many of you have written to ask, "What the heck does 'Southern Enclave' mean?? It ain't part of the SW universe!" Well, we feel that it is, by extension, just as fandom itself is an extension of the SW universe. The current mythos has it that the Old Jedi were organized in Enclaves and at their height of power probably had more than one enclave per planet. Alderaan in particular probably had several, which we think many have included two major enclaves -- one in the northern hemisphere and one in the temperate climate of the south. In our extension SW universe, the Southern Enclave was a major center of philosophy and communication... and that's what we hope you'll feel about SE, that you will use it as a voice for your thoughts about SW and fandom and to communication with fellow fans.

The editor writes in issue #38:

Jeanine Hennig was the one who coined the term "Southern Enclave" to describe the Dallas area fan group way back about 1983. She stole that term from Maggie Nowakowska, who I think was calling the Seattle group the "First Terran Enclave." I liked the sound of it so much that, when I started this newsletter, I stole it from her!

I LOVE SOUTHERN ENCLAVE! I love your format, and the diversity of opinion, and the sheer size of the thing. Considering I first read.my first letterzine about six months ago, I have really gone gung-ho on these things. I guess when you get into zines, you get into letter zines, too!... Reading SE is sort of like a mini-con of its own—and a hell of a lot cheaper. [1]

SE isn't just a letterzine, it's more like an institution. [2]

Both SCOUNDREL and SOUTHERN ENCLAVE are now on the same publishing schedule. I love letterzines, they get me through the wastes between MediaWests, but could you two editors get together and slightly adjust your schedules? I'm sure coming out within a few weeks of each other is going to cut into the number letters you receive and put you and put you in to competition for articles. It is obvious fans can support several letterzines; it would be really nice if a different one arrived every month. [3]

The editor of SE responded:

Joan and I have discussed this in the past but didn't come to any conclusions. Guess we need to talk again. [4]

Issues #1-#8 were created on a Wang DIS 130 with a daisy character printer. There was quite a bit of setting up the columns, printing them out in 10-pitch, having them reduced, and relaying them out, etc.

From the editor regarding a change in equipment with access now to "a big Wang VS 90 with all sorts of lovely enhancements and print options. By using their laser printer, I am able to print directly in l5-pitch double columns (thereby avoiding the reduction and layout steps). I think the finished product with it is pretty nifty-looking."