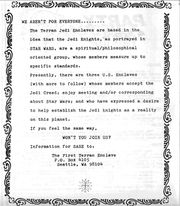 The Terran Jedi Enclaves are based in the idea that the Jedi Knights as portrayed in STAR WARS, are a spiritual/philosophical oriented group, whose members measure up to specific standards.

Presently, there are three U.S. Enclaves (with more to follow) whose members accept the Jedi Creed; enjoy meeting and/or corresponding about Star Wars; and who have expressed a desire to help establish the Jedi Knights as a reality on this planet.

If you feel the same way,

The fan who started the first Enclave, Kirkland, describes it as such:

It began with four Star Wars fans and a bottle of wine, in Seattle, WA, the first August of the movie. We talked, drank and in the wee hours of the morning, decided that we needed an "institution" to keep alive the memory of the movie, especially, of course, Ben Kenobi for whom all of us felt a certain indescribable "something." From these humble beginnings... Define an Enclave. Well, It's a place and a group of people. If you can bear with the esoterics a moment, let me say that it is a focal vortex of the Force and that contact with the Force is constant. Each memeber determines how active he or she wishes to be; each member is responsible for his or her own life and what he/ she does with it. But we set no rigid rules. Our Creed is the statement of belief in what we do, and as long as a person does not violate the Creed, it is up to them how they handle their life. We consider ourselves a philosophical brotherhood (for want of better terms), but if a person chooses to consider the Jedi Way (as we have defined it in the Creed) as a religion he is free to do so. We don't expect to be for everyone, but we don't actively keep anyone or any type of person from joining. It takes a self-motivated individual with a well-balanced personality to take the interactions of a large number of strong personalities that comes with belonging to an Enclave. We believe the individual has the responsibility to be a survivor--that is, learn the skills that will enable him or her to live and act in a manner suited to the evolution of the Self. Since the best form of service one can render to another being is the saving of a life, our people have elected to make CPR [Cardiopulmonary Resuscitation] training a condition of membership. The Seattle Enclave is planning a January retreat with crisis intervention as one of the activities. Other Enclaves have the CPR requirement, but are free to decide what, if any, other criteria are necessary for their group membership. I know all this sounds terribly serious and it is, in a way. It is a deeply felt conviction of all the Enclave members that they have something special in the Creed, and in the fellowship of each otner. But It isn't all work. We have fun; we party and dress up in costume for cons and other things. We offer our services for a good cause , and we enjoy the work and the service we are giving. And being together, we reinforce our ideas and beliefs without preaching or testimonials. Above all, we know who we are and where we are going. And we look into the future with optimism, because we can choose what our lives will be. ...The Enclaves have a total membership of about 40 people, between 18-35 years old, from all economic and educational backgrounds. Some are fen, some not. [1]

"First Terran Enclave" was one of several.

The editor writes in issue #38:

Jeanine Hennig was the one who coined the term "Southern Enclave" to describe the Dallas area fan group way back about 1983. She stole that term from Maggie Nowakowska, who I think was calling the Seattle group the "First Terran Enclave." I liked the sound of it so much that, when I started this newsletter, I stole it from her! [2]

"First Terran Enclave" was the responsible for creating the first Star Wars zine lending library with the 100 or so zines given to them by Maureen Garrett when the Official Star Wars Fan Club disbanded. These zines were the ones George Lucas requested/required be sent to him as they were published.

A good number of them [zines] -- over a hundred titles from the OSWFC collection as well as titles since donated by fans -- temporarily reside in a basement in Seattle as the SW Fanzine Lending Library. This collection of SW fanzines, many donated by Maureen Garrett when the OSWFC disbanded in the spring of 1986, is intended for eventual donation to a scholastic library... The 'who' of the library, as in who's providing the slave labor is... the First Terran Enclave... Bev... is in charge of searching for the best home for fandom's zines when the Library shuts down... Maggie and Susan have the basement, Jim and June have the computer, Signe needs a good excuse to escape from the wilds of Issaquah and the Cascade foothills, and DJ has a few things to say about our original charter and guidelines. ' [3]

This collection eventually became the The Fanzine Archives: A Library for the Preservation & Circulation of Fan-created Material which in turn became University of Iowa Fanzine Archives.