George Lucas is a film writer and director most known for Star Wars and Indiana Jones movies. 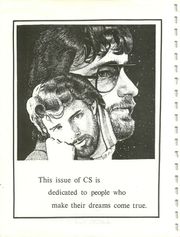 By default of Star Wars material, Lucas was constantly jossing his fans, something that may have added interest to that fandom, but was also extremely frustrating. 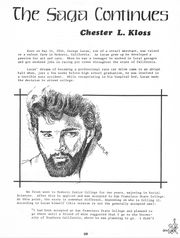 from Legends of Light #1, artist is Judith Low

Relationship with Fandom during the Original Trilogy

His relationship to fans was much more distant, hands-off, and sometimes downright hostile than Gene Roddenberry, the creator many fans may have wished he was more similar to. One fan writes:

Lucas doesn't do as much for fans as the creator of Star Trek and there is a difference... This difference, I believe, can make or break a fandom. ST fandom has grown over the years due to respect between the fans and the show's creator. I'm not saying that ST fandom wouldn't still be here if Mr. Roddenberry despised us, but it wouldn't be the same, and ST fandom is appreciated. I've never heard ANY fan write or say disparaging remarks about Roddenberry. Respect breeds respect. It really is that simple." [1] 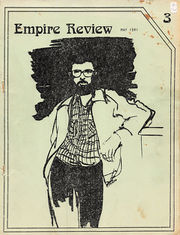 However, he was not necessarily friendly to fandom, and at different points made attempts to control fandom activity and fanworks. From one fan in 1984:

I know that he gives plenty of money to charity and he is building new studios to teach new, young cinema artists, but as far as the movie FANS are concerned, he could care less. Sure, he's allowed a SW Fan Club which may occasionally sell us such things as posters at premium prices but BIG DEAL!. WE have have been paying who knows how many millions of dollars to see GL's movies over and over and over, yet he won't allow Star Wars at conventions, none of the stars of the movies have ever been to a convention as a guest speaker, GL has never been to a convention as a guest speaker, and an attempt was even made a few , years ago to control the type of material we would be allowed to print in our fanzines! (an attempt that failed, by the way). Is this the thanks we fans get for giving him some of the money he uses for charities and studios? I will continue being a SW fan, writing SW stories, and reading and buying SW material, but I will continue to do so because of my interest in the SW universe, NOT its creator." [2]

Significantly, Lucas attempted to suppress slash fanworks, namely Han/Luke. While requiring that fanworks be "family friendly," he demanded that that fans submit copies of their zines to his offices. As it was put by meeedeee in response (with many links to Fanlore) to questions about Han/Luke fandom and the lack thereof:

As far as we know, no one was sued for publishing a Star wars slash zine or fiction. The reason that Star Wars slash zine fandom went dark, had to do with one gen and one het story published in 1981: the Swedish zine The Dark Lord (sexual torture of Han) and then later Slow Boat To Bespin (Han/Leia). This led to Lucasfilm issuing a series of protocols requiring the publication of family friendly material. These protocols put a damper on Star Wars zine publishing overall because they were subjective and arbitrary.

Of course given the homophobia of the times that classified any gay material, even G rated, as adult, this meant that published slash in Star Wars fandom pretty much dried up until the late 1990s, when brave slash fans r. Interestingly, even at the height of the Lucas anti-sexuality crusade, two slash writers were able to obtain permission to publish a slash story using original characters. It took some effort to get permission, including a letter of protest written directly to Lucasfilm.

One good thing that came out of the Star Wars fanzine crackdown - before the crackdown, Lucas had demanded that fans submit a copy of their zines to his offices. Eventually he grew tired of them and the collection was given to Ming Wathne, who added thousands of other fanzines from other fandoms and ran the Fanzine Archives, a fanzine lending library. In 2008, she donated the collection to the University of Iowa and is open to the public.

Other fans were more forgiving of Lucas's interactions with fansom. In 1985, some fans started a fan club and newsletter, The George Lucas Appreciation & Admiration Society.

The George Lucas Appreciation & Admiration Society' is dedicated to George and George alone. The newsletter is a place for all to voice their opinion, react to another's opinion, display artwork, comics, and the like. Yet, in no way will it be a place for digression to a level of gossip and smut. George has done so much for us; let's all appreciate him together." [4]

Relationship with Fandom during the Prequel Trilogy