Slow Boat to Bespin is two stories by two different authors in Guardian #3 (May 1981).

The first one, the more "explicit" one, was reprinted in the zine Collected Circle of Fire (1985) with the title "Aries Descending," along with a probably related story, called "Aries Rising," that had also been in "Guardian." 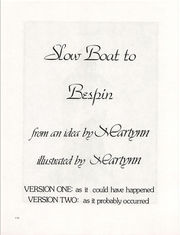 Quick, someone clue me in to the Slow Boat to Bespin incident. I just recently bought a second-hand copy of Guardian with those two stories (which I loved). What was the stink? [1]

The first version of the story, the "strong PG-13 rated" one, is the one by Zeek that sparked the censorship controversy with Lucasfilm and generated the Open Letter to Star Wars Zine Publishers by Maureen Garrett.

From Boldly Writing regarding the story, "Slow Boat to Bespin: "Both authors alleged that Han and Leia consummated their relationship at that time. Neither was any more explicit than countless female-crewmember-beds-Spock stories that Star Trek fans had been writing for years."

Note from "The Collected Circle of Fire"

A note on "Aries Descending" (formerly "Slow Boat to Bespin"): Because of the sexual content, Pat and I hesitated to reprint this story. However, since the events described in the story are integral to the development of the second volume story line, we do not consider this story exploitive—so, we decided to go ahead and print it. We do want to warn readers that this is a strong PG-13 equivalent story. Please use your own judgment as to whether to read it.

Part of a "Cycle" of Stories

According to the editorial in Collected Circle of Fire in 1985, this story was part of a related series:

You may have noticed by now that this collection has a "volume 1" in the back of the title. Originally, Pat and I had intended to put the entire "Circle of Fire" cycle into a single volume. But after I got started, we saw how much was already written -- more than enough to fill a zine. So, we decided to print the already completed stories as the first volume of a continuing story line. The four reprinted stories in this volume are intended to form a complete story "circle" of their own, spanning from the period from the end of "A New Hope" to "The Empire Strikes Back." The second volume will continue the saga with original stories, the only exception being two short reprints which will be completely rewritten. When finished, these two volumes will comprise an entire alternate SWARS universe.

The second volume and the rest of the "cycle" were never published, at least in the form in the author's note.

The stories in this first cycle were:

... To think that the two versions of Slow Boat to Bespin helped to spark off SexWars here in the U.S. They're rather tame by today's standards.[2]

By the by, this is strictly an unofficial comment, but I was told by SW Fanclub folks long ago that Slow Boat To Bespin simply got caught up in the troubles because it came out at the same time as the stories that really fried the LF lawyers. My contact expressed regret because, as you noted, the stories weren't really challenging, even by early 80s standards.[3]

"Slow Boat to Bespin" 1 and 2 by Anne Elizabeth Zeek and Barbara Wenk are two versions of what happened on that fateful trip to Bespin aboard the Falcon. The first version has a much more experienced Han walking the Princess through the lovemaking process. I thought this Han was a little off the mark since I can't see him calling Leia, "lovely Leia." Also, many of the other lines have appeared countless times in fan fiction, such as "forget the rebellion," "you've never learned to be a woman." etc. One would think that they had gotten past that point in the time frame of TESB. Leia seemed to plunge into the relationship and this is why I think her character is truer to the original than Solo's. Leia has always appeared to be a ticking bomb just waiting for an excuse to go off.

The second version is a tougher and less sentimental one. Leia fights Han's approaches at first, but not for long. I liked Han better in this version since he seemed more on target and Leia is also characterized well. The only problem I have concerning both versions is the way each author resolves each story. I just do not believe that Solo would feel the need to verbally express his feelings at this time. I feel he would keep that certain phrase inside for now, if he in fact feels it at all. But this is a small problem; the stories are well written and enjoyable to read.[4]

... 'Slow Boat to Bespin' is a name shared by two stories written from an idea by Martynn. Both stories take place on the Falcon as it is heading for Bespin and deal with getting Han and Leia in bed together for some lightly graphic sex. (light or not, it's the most I've ever seen in a SW zine. Damn well about time, too!)...[5]