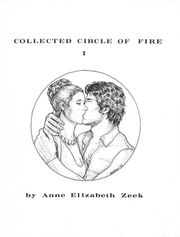 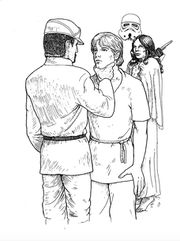 back cover by M.R.O. Ludwig 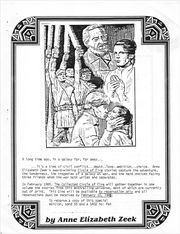 a 1984 flyer -- The art is by MRO Ludwig. It does not appear in this zine, but is instead art for the story "Brother's Keeper" in Alderaani Imperative.

There was just a single issue despite the fact it was labeled as "issue one" on the cover.

It appears that this zine was planned to have been published much earlier and in different circumstances. In Masiform D #9, the editor and publisher of Poison Pen Press wrote:

I'm also involved in editing a STAR WARS novel (a cycle of stories, actually) being written by Barbara Wenk and Anne Elizabeth Zeek. I'm not really sure what my function is in this undertaking. Anne, publisher of TIME WARP, PERN PORTFOLIO, and RIGHT OF STATEMENT, surely doesn't need any help in publishing Circle of Fire, and she is also an accomplished editor. As for Barbara, who reads all my submissions and has an incisive (read—nasty) wit, and a sharp eye for poor writing. . . . (Though it is difficult to edit your own writing, Ghu knows.) Sometimes I think I'm just there as a buffer between the two authors. (Snarl! Gnarrish!).

This zine contains the story "Aries Descending" which is a reprint of Slow Boat to Bespin.

This is the story that was one focus of the Star Wars Open Letters in 1981.

A note on "Aries Descending" (formerly "Slow Boat to Bespin"): Because of the sexual content, Pat and I hesitated to reprint this story. However, since the events described in the story are integral to the development of the second volume story line, we do not consider this story exploitive — so, we decided to go ahead and print it. We do want to warn readers that this is a strong PG-13 equivalent story. Please use your own judgment as to whether to read it.

...an idiosyncratic SWars universe comes to life, courtesy of Anne Elizabeth Zeek. All the stories from "Aries Rising "to the startling conclusion, making a complete alternate view of the SWars universe. Planned for '84, to be sold by reservation only. To reserve send $5.00 and SASE [1]

...it's a time of civil conflict... death...love... ambition... choice. Anne Elizabeth Zeek's award-winning Circle of Fire stories capture the adventure, the tenderness, the tragedies of a galaxy at war, and the hard choices facing three friends whom the war both unites and separates.

In February 1985, The Collected Circle of Fire will gather together in one volume the stories from this enthralling universe, most of which are currently out of print. This zine will be available by reservation only and all reservation must be received by February 10, 1985. [2]

"Again, for the record, I officially give permission for fans to copy any of my OOP SWars zines (frankly, it's easier on me than doing the photocopying myself): JUNDLAND WASTES (all issues), ALDERAANI IMPERATIVE, COMPLETE CIRCLE OF FIRE 1 and COMPLEAT ZEEK 1. For the record, the last two never had second volumes because of various fiscal problems... SWars has become a fairly small market and the price of printing is way up." [3]

Part of a Cycle, and the Proposed Second Volume

From the Author's Note:

You may have noticed by now that this collection has a "volume 1" in the back of the title. Originally, Pat and I had intended to put the entire "Circle of Fire" cycle into a single volume. But after I got started, we saw how much was already written -- more than enough to fill a zine. So, we decided to print the already completed stories as the first volume of a continuing story line. The four reprinted stories in this volume are intended to form a complete story "circle" of their own, spanning from the period from the end of "A New Hope" to "The Empire Strikes Back." The second volume will continue the saga with original stories, the only exception being two short reprints which will be completely rewritten. When finished, these two volumes will comprise an entire alternate SWARS universe.

The second volume and the rest of the "cycle" were never published, at least in the form in the author's note.