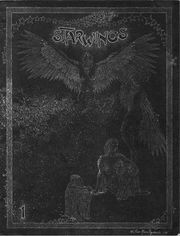 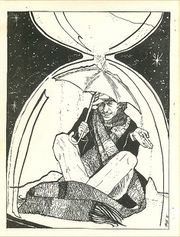 back cover of issue #1, "Time in a Bottle" by Paulie Gilmore

Starwings is a gen multimedia anthology.

The front cover is by Lisa Mason Agostinelli, the back cover ("Time in a Bottle") by Paulie Gilmore, inside back cover by Rima St. Cyril MacGallifrey, other art not listed below by Anne Davenport, Linda Stoops, and eluki bes shahar.

The editorial is mostly about thanking people for typing and for the use of their typewriters. 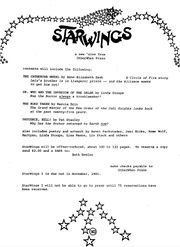 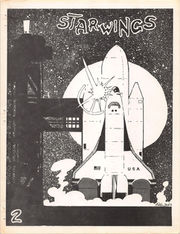 back cover of issue #2, Pat O'Neill

Well, here it is at last — StarWings II, Some of you may have noticed that it is a little smaller than the first issue, and that it costs more. The reason for this is quite simple.

First, printing costs have gone up, like every thing else. Second, the art in this issue is, in my opinion, better than the art in 'Wings I, over all. The only problem with better art is that it's also darker art, at least in this instance. You may not knov; it, but the darker art is, the harder it becomes to reproduce, and when it gets really dark, it needs a special kind of reproduction. That type of reproduction costs $15-$20 for each piece of art, before the usual printing charge. I had to use it on four pieces of art. Then there were the three pencil pieces, which needed yet another expensive reproduction method. All-in-all, this has been a much more expensive issue than StarWings I. I think you'll find it's worth the money, though.

You may also have noticed that the story by Eluki bes Shahar, Advance Man/Live Freight, which was supposed to appear in this issue, doesn't. This is due to the fact that things went haywire (see below). I'm not sure where Advance Wan will appear, but keep your eyes open for it. It will be worth the price of whatever 'zine it appears in.

Now I'd like to apologize for the delay in getting 'Wings II published. Originally, it was scheduled for Memorial Day, 1983, then August, then the end of the year. As you can see, it didn't make any of those deadlines. This is due to fact that I messed up my life in every way imaginable last year. I'm just now starting to get my act together, and the first thing I did was get this 'zine finished and to the printers. Public thanx go here and now to my roommate Terry Wolfe, for putting up with me longer than she should have, and for helping me get back on my feet.

Thanx also go to Julia Eckleu:, for typing and typing and typing and... Also, to Joe Ellis, Peter Zale, and Susan Voll, for proofreading and proofreading and proofreading and... Finally, thanx go to all the authors, artists, and subscribers, for your patience as the delays mounted and mounted and mounted and... 'Wings III will appear when I have the time, energy, money and enough printable material to bring it out. I am looking for contributions, but if there is any reason that your story, poem, or whatever, must be in print before a certain date, please don't send it to me. I'm not making any promises — everything goes wrong when I do.