From Fanlore
(Redirected from Dr. Who)
Jump to: navigation, search

Doctor Who is a UK science fiction television show that first aired on BBC One in 1963. It also was shown for a time in the U.S. on PBS.

The central character is an alien adventurer known as The Doctor who looks human but is actually a "Time Lord". They travel through time and space in their ship, the TARDIS (an acronym for Time And Relative Dimension In Space), which appears in the form of a blue police box from the 1950s. Due to its transdimensional nature, it is much larger on the inside.

Each episode finds the Doctor visiting another planet, or a moment in Earth history.

The Doctor often travels with one or more companions or assistants, the majority of whom are human women. The Doctor "regenerates" into a new body rather than dying, allowing a variety of actors to play the role; each incarnation has a different personality as well as physical appearance but retains most of the accumulated memories and knowledge of previous Doctors. Fans often refer to each different incarnation numerically; for example, the incarnation of the Doctor portrayed by Christopher Eccleston would be referred to as "The Ninth Doctor" or simply "Nine". (See the Naming the Doctor section of the Doctor Who Fandom Glossary page.)

Doctor Who originally ran for 26 seasons on the BBC from 1963 to 1989 and featured seven different Doctors played by seven different actors. The series was structured as multiple-episode story arcs of varying length within each season or series. The series was also broadcast in many other countries, appearing on PBS in the US. Although the launch of the revival series in 2005 led to a reduction in the number of broadcasters showing the original, the original series series is widely available on streaming services and DVD.

The BBC lost or destroyed many of the earliest episodes, mainly by reusing the tape they were stored on for other shows. The fannish practice of recording the audio of episodes as they aired resulted in the preservation of at least the sound tracks for all the missing episodes.[2] Some episodes were later recovered from television broadcasters in other countries, with the most recent discovery in 2013.[3] As of the end of 2015, all known surviving/recovered episodes of Classic Era Doctor Who up to that point had been released to DVD in the UK.

For a series of episode reaction posts, see copperbadge's three things about classic who; archive link[4] from 2010. 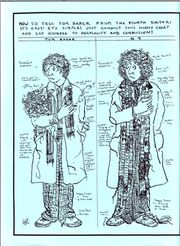 sample fan art, back cover of Bafflegab #2, one fan's humorous guide to distinguishing between the Fourth Doctor and the actor who plays him

Also see The Shipper's Manifesto for Doctor Who; archive link and List of Doctor Who Pairing Names

Between the Classic and the New

A TV movie was also made in 1996. This was a co-production between the BBC and Universal, filmed in Canada; it was intended as a backdoor pilot for an ongoing American series, which never eventuated. The TV movie aired on Fox in the US, where it received poor ratings and reviews. It was more successful in the UK. A key aspect of the TV movie is that while it was a reboot/relaunch of the series, it also was part of the same continuity as the original series, featuring the seventh Doctor regenerating into the eighth (though its official canonicity was not confirmed until the 2005 revival series began to include references to it). For Bjo Trimble's attempt at casting for this production, see Open Letter by Bjo Trimble to Doctor Who Fans.

In the period between the cancellation of the original series in 1989 and the revival in 2005, there was a proliferation of semi-canonical material mostly concerning the Seventh and Eighth Doctors. These books and radio plays were created by fans but published professionally, and in some cases by the BBC.

The 1989-2005 "interregnum" also saw the production of numerous independent made-for-video productions featuring characters that were licensed directly from their creators, rather than from the BBC. The Doctor could not be featured in any of these (as the BBC owned the rights to the character), but it was still possible for productions to be made such as Downtime, which featured the Classic Era characters Victoria Waterfield, Brigadier Lethbridge-Stewart and Sarah Jane Smith, again played by their original actors. A series of productions called P.R.O.B.E. saw Caroline John reprise her 1970 role of Liz Shaw in a series that had some similarities to the later official spin-off, Torchwood.

LJ icon featuring the Ninth Doctor and one of his catch phrases, design by kyizi

In 2005, the BBC revived the series with Russell T. Davies as head writer and executive producer. The new series, filmed in Wales and made by BBC Wales, continued from the canon of the original series without substantial changes. The format of the show was altered from the multi-episode arcs to the more common television standard of mostly stand-alone episodes. Season running plot arcs—such as the one that launched the idea of Torchwood—are woven into the plot of episodes throughout the series. Steven Moffat was a contributing writer from the beginning of Davies' tenure, and the BBC announced in May 2008 that Moffat would be taking over from Russell T Davies as head writer and executive producer for the revived show's fifth series, to be broadcast in 2010. (Moffat and collaborator Mark Gatiss are also responsible for the BBC Sherlock, which is also a fan favorite, though in both cases, fans sometimes take issue with the showrunners' choices.)

New Who has featured four Doctors and five actors as well as ten main companions (almost all women):

The Doctor has had several (potential) love interests in the New series, including Madame de Pompadour, River Song, and Clara Oswald, with River Song actually wedding the Doctor at one point. The series also broke from the original by establishing the possibility of romance between the Doctor and some of their companions. Fandom, however, is divided over this.

A few male companions have been along for shorter rides, including Captain Jack Harkness, Mickey Smith, and Wilfred Mott.

In addition to the three "official" Doctors, in 2013 the series also revealed the existence of a previously unknown "unnumbered" incarnation between the eighth and ninth Doctors, known as the War Doctor.

Both Classic Who and the new series are broadcast pre-watershed (before 9 pm) which means they are intended as family programming, suitable for children.[5]

The main off-Livejournal archive for Doctor Who fanfic is A Teaspoon and an Open Mind, which also includes fanfic for all Doctor Who spinoffs. This archive was created before the new series began.

The show's 12th Doctor, Peter Capaldi, is notable in this regard for not only being a longtime fan of the series, but it is documented that he attempted to take over the official Doctor Who Fan Club in the early 1970s, when he was a teenager, and corresponded with the show's then-producer, Barry Letts, at one point even being gifted with scripts from a yet-to-be-broadcast Third Doctor episode.

To be a true fan of the famous British TV fantasy series "Doctor Who" you need to be the equivalent of a Talmudic scholar. The show has been on for decades, since 1963, and there are some people who have seen almost every episode. And there are those who remember or chronicle the plots of almost every episode, as well as the constantly renewing character of the Doctor himself. He has had 12 "official" regenerations over the years. In fact he has been compared with the mythical "Wandering Jew" as he wanders through time and never dies. The WhoMudists can interpret, quote, evaluate, and correct the body of knowledge which by now can fill a whole wall with texts, videos, and a whole house with memorabilia.[6]

Discussion and Controversy Regarding the 12th Doctor

Every time the Doctor has been recast has generated controversy. The announcement of the casting of the twelfth Doctor in 2013 was a particular sore spot for fans who had wanted a female Doctor, not only because another white man had been cast, but also due to comments by TPTB and others declaring why they didn't want a female Doctor.

One of the more common controversies between Russell T. Davies and Steven Moffat arcs is the differences between the female characters during Davies' time and Moffat's time. Some fans had trouble connecting with Moffat's direction of the series, while others adored it. There were fans that couldn't quite connect with River Song or Amy Pond. Moffat is often criticized for not being able to write in-depth female characters and their relationships with men.

This study is at best flawed, as the author herself admits. However, a closer look at Moore’s methodology reveals that not only is it flawed: but she is dishonest in her research. She does not include enough details to replicate her results, created a misleading info graphic, failed to address 24% of Moffat’s episodes, and outright lied to her audience.[8]

"The first British fanzine appeared in 1975. This was TARDIS. It comprised twelve photocopied pages and cost a meagre 5 pence. The second issue of TARDIS appeared three months later. The page count had now risen to twenty pages for 8 pence... The second issue of TARDIS was the first to include a letters page and thus what can be described as the first real communication between fans." [10]

See: How Fanzines Helped Put Doctor Who Fans in Charge of Doctor Who (2013)

See: List of Doctor Who Fanzines or Category:Doctor Who Zines

See Doctor Who Fanfiction for the main article.

cover of a convention program for Omnicon

Below are conventions that are/were either centered around Doctor Who or often have/had significant Doctor Who related guests. 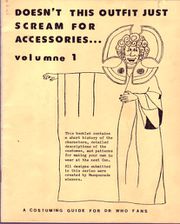 a zine focusing on Doctor Who costuming

The Fourth Doctor, played by Tom Baker, wore a signature long, multi-coloured scarf in many episodes. The Doctor Who Scarf shows photos of the various versions of the scarf used in the series and includes knitting instructions for several versions. Other patterns exist for knitting the scarf as well. In 1976, a promotional version of the scarf was commercially produced and sold to fans.[11]

For a scarf origin story, see Faces of Time #1.

In 1984, a fan promoted her small fan club and saw scarves in her future:

One of my many new involvements is a Doctor Who fan club, called, at present, 'FRED' (Fans who Really Enjoy the Doctor) which meets about every third Saturday at my apartment and watches video tapes. If any of you out there are interested in attending, let me know. As a part of 'FRED'... I hope to shortly have the official BBC pattern [for the scarf] and will make scarves from that... Price is $1.50 a foot. All profits will be given to KCET [a local t.v. station] for the Doctor in the name of 'FRED.[12]

The Adipose monster was featured in the New Who, Series Four (featuring the Tenth Doctor) episode, Partners in Crime.[13] Shortly after the episode aired, fans began knitting stuffed toy versions of the monster and sharing the knitting patterns online. One fan, mazzmatazz, received a Cease & Desist email from the BBC for freely sharing the patterns for the Adipose and other Dr. Who related designs.[14][15]

In 1973 the Radio Times published a set of plans for building a slightly simplified full-sized Dalek from wood, fibreglass, etc. These plans are still available on line, though not from the BBC, while Project Dalek offers updated plans which are closer to the designs seen on TV in different eras, but require more sophisticated techniques. The site also offers plans for scale models etc. 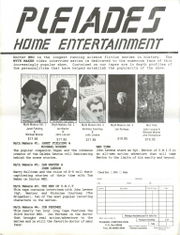 A series of for-profit interviews on video tape sold by "Pleiades Home Entertainment": "The MYTH MAKER video interview series is dedicated to the numerous fans of this increasingly popular show. Contained on our tapes are in depth profiles of the personalities that have helped establish the popularity of the show."