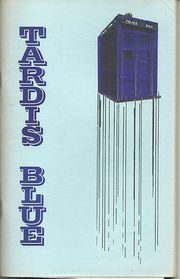 The TARDIS, which stands for Time And Relative Dimension In Space, is The Doctor's time- and space-travel vessel in the Doctor Who series.

Due to a problem with the chameleon circuit, the TARDIS appears as a blue police call box from the 1950s throughout most of the series. Because of its transdimensional nature, the TARDIS is "much larger on the inside," a running joke throughout the series which has become a widely understood pop culture reference outside of Doctor Who fandom.

The TARDIS control room changes periodically (referred to as "changing the desktop theme" in the Tenth and Eleventh Doctor era), and the TARDIS has many rooms and levels and hallways.[1] The TARDIS has several times had to eject some of its rooms and features (including most recently the swimming pool) in canon.

The TARDIS shows signs of sentience and is considered a character in its own right by many Doctor Who fans, even before the TARDIS became embodied a few times in canon. The TARDIS sort of possessed companion Rose Tyler in episode The Parting of the Ways and possessed the one-off character Idris in the episode The Doctor's Wife. The TARDIS and The Doctor seem emotionally attached to each other. In The Doctor's Wife episode, the TARDIS indicated to The Doctor that she liked it when he called her sexy (in her non-embodied form) and that she would always be there for him, and even whispered 'I love you' upon leaving her embodied form. The Doctor has also expressed dismay multiple times in canon when the TARDIS seemed headed for imminent demise.

Multiple zines are named for the TARDIS[2], and the TARDIS features frequently in Doctor Who fanworks, often as The Doctor's spaceship, abode, and refuge, but also as a sentient being.

The TARDIS has been paired with The Doctor[3] and with Captain Jack Harkness[4] in fanfiction.

The scientific community has, for many years, felt the influence of the Doctor Who fandom. Naturally, many scientists are drawn to the challenge of explaining how the TARDIS works and there have been several papers on the subject[5], and it's discussed at length in Brian Cox's lecture The Science of Doctor Who. In honor of the show's 50th anniversary, Robert Doyle and his daughter Alex Doyle built and launched a TARDIS satellite into orbit.[6] The ship's appeal is not limited to physicists however, and in 2007 a group of biologists sent 3000 Tardigrades into space for a project "Tardigrades In Space", a.k.a. "TARDIS".[7]

The TARDIS is a particularly popular subject in Doctor Who fan art, fancraft and cosplay[8]. It is perhaps only exceeded in the fandom's fancraft inspiration by The Scarf and Daleks.[citation needed]

The TARDIS often appears in crossover art, with or without The Doctor