From Fanlore
(Redirected from Gifset)
Jump to navigation Jump to search

The first GIF was of an airplane, created by Steve Wilhite in 1987. "The animation feature was added in an updated version of the GIF file format." [1]

According to its creator it is pronounced "JIF." [2]

"Reaction gifs" are the most ubiquitous gif type on the internet. According to Reddit, "A reaction gif is a physical or emotional response that is captured in a gif which you can link in response to someone or something on the Internet."[3] Reaction images have been around since at least 2004 on image boards like 4chan,[4] and using animated images as reactions may have started in 2007.[note 2] When fandom adopted the reaction gif is also unclear and probably depends on the platform. ONTD, where users had previously deployed YouTube videos and still images, may have popularized the reaction gif on LiveJournal in early 2008.[citation needed][note 3]

Gifsets depicting scenes from films or TV, as well as AU gifsets, should be "read" from the top left to the bottom right like (Western) comic panels. See, for example, #the only time a character in a musical actually acknowledged the fact that they were in a musical,[5] a two-by-four gifset of a scene from the film Enchanted that represents a moment fans found funny.

Here is another two-by-four gifset, an AU from the Stilinski Twins meme: Teen Wolf AU, in which Stiles has a not so social skilled brother, Stuart. Everyone knows them as the Stilinski twins.[6] by brogitsune (2013). If you read from top left to bottom right, they show a lunch room scene in which Lydia Martin and Allison Argent are ogling the Stilinski twins, who in turn are talking about Stiles's relationship with Derek Hale. Each gif is captioned with the dialogue of the scene. The caption in the gif shown to the left, "The Stilinski Twins?", is meant to represent a voice-over of Allison asking Lydia a question, and the gif itself represents a point of view shot as Allison checks to see what Lydia is looking at. A film technique used in the composition of the gif is shot-countershot; footage of the actor Dylan O'Brien from a Teen Wolf episode glancing to the right is followed by footage of the same actor in the film The Internship looking to the left, creating the illusion that there are two separate people looking at each other. 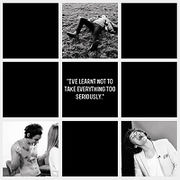 A less common style of gifset is one that is not meant to be read in order, but is carefully timed to be viewed as a whole, one image shown across multiple screens so to speak. For example, see this three-by-three gifset[7] created by blamestyles on the occasion of Harry Styles's 20th birthday. Each gif in the set contains an alternating sequence of black frames, screencapped video footage of One Direction, and text on a black background, all perfectly synchronized to create a visually appealing whole. It even includes quotes from interviews, so is a bit like a documentary film.