Sailor Moon, also known as Sailormoon or Bishōjo Senshi Sērā Mūn (sometimes translated as Pretty Soldier or Pretty Guardian Sailor Moon) was originally a shoujo manga created by Naoko Takeuchi. It's notable for being one of the first magical girl mangas that has a group of magical girls instead of just one. The manga has been adapted into an extremely popular anime, a stage musical, and a live-action tv series.

After many years of being unavailable in English, a new reprint of Sailor Moon (and the previously unreleased Codename: Sailor V) was released by Kodansha USA in September 2011. [1]

A new Sailor Moon anime was first announced on July 6, 2012[2], and was expected to premiere several times through out 2013 and early 2014 before it the new series titled Pretty Guardian Sailor Moon Crystal finally aired on July 5, 2014.

There are other minor characters, including Usagi's family members, Ikuko, Kenji, and Shingo; characters that appear intermittently, such as Naru Osaka (Dub name: Molly Baker), Usagi's best friend, Motoki Furuhata (Dub name: Andrew), Mamoru's best friend and an early crush of Usagi and several other Sailor Senshi, and Umino Gurio (Dub name: Melvin), a classmate of Usagi and Naru's, as well as characters that appear only in one arc, whether as friends or foes, such as Professor Tomoe, the Sailor Starlights, and others.

Sailor Moon fandom is very large and is still pretty active, this is mainly due to it being a gateway fandom or threshold fandom for many fans.

Shipping in Sailor Moon runs the gamut from canon to semi-canon to purely fanon relationships. Examples include:

Sailor Moon and the English-language dub of the anime are credited with bringing many new English-speaking fans into anime fandom.[3]

The show reversed a common trope in many Western cartoons, where all the main characters are male with one token female. In Sailor Moon, all the main characters are female, with the "token male" being Sailor Moon's romantic interest. The show focused heavily on female friendships and "girl power," making it especially attractive to female fans who might have previously thought of anime as a "guy thing."

One fan explains the appeal of the series:

This is a world where femininity is not something to be ashamed of, it’s the source of POWER. The girls don’t use their pretty clothes and jewels and compacts as playthings to impress men- these things are all weapons against evil, and powerful ones. They declare themSELVES pretty, needing approval from no one. Our hero possesses all the typical “chick” attriibutes- emotional, tearful, forgiving, loving, nurturing- and she uses these attribute to triumph and kicks ass. She burns monsters alive with the purity of her love, sends out supersonic waves that shake the villains down when she bursts into tears, and her friendship and forgiveness is the most effective superpower one could ask for. The “girly” emotions and affectations are not something to be ashamed of or suppressed, but the source of the power these girls wield. They don’t have to imitate guy heroes at all or act “masculine” to be taken seriously- girliness is just as powerful. The manga also rips apart the idea that masculine and feminine traits cannot coexist by showing Sailor Jupiter to be the tomboyest toughest fighter…AND the best cook, master of housework and hopeless romantic. [4]

The usenet group alt.fan.sailor-moon was extremely active in the late nineties when Sailor Moon was airing in the US (and for some time after it had stopped airing.)

The official dub went off the air in the US in 1996, after only 65 episodes, stopping abruptly in the middle of Season Two. New episodes would not be dubbed for almost two years, and then only 17 more, to finish off the season. Because of this, Sailor Moon was a popular title for fansubbing, where independent fan groups translate the dialogue themselves, and then synch the on-screen subtitles to the dialogue using a computer program. Most Sailor Moon fansubs were distributed on videotapes.

Following the advent of YouTube, several fandubbing projects were conceived to deliver English-language content for Sailormoon fans of the only remaining undubbed season of the show, Sailor Stars. Two examples include projects by Fighter4Luv Productions and CrescentMoonzStudios.

Once the dub came out, there was a fair amount of confusion over what names to use. Purists insisted that only the original Japanese names and terms should be used in fanfic; fans who had come in through the dubs used the names from there. This question became even more complicated when ficcers using dub names wanted to write the characters that hadn't been introduced in the dub yet, such as the Outer Senshi. Some of these writers decided to keep the original Outer Senshi's names while using the dub names for the Inner Senshi; other writers invented new names for the Outer Senshi that felt like they could fit in the dubbed world. One such example is Mark, who has a chart for the character names he used. Haruka became Alexandra, Michiru became Michelle, and so forth.

Eventually consensus agreed that using dub names in fic was fine, provided that the author was at least consistent. Mixing dub and original names became a sign of sloppy writing in the fandom.

Some fans were insistent on use of original names only: for example the site PGSM Fanfiction would not allow stories using dub names.[5]

Save Our Sailors (or SOS)[6] was a campaign devoted to getting the entire series dubbed for American audiences. While it had a large following, it also invited controversy. Much of this was centered around the "Prince Uranus" rumor, which claimed Sailor Uranus had been a man in a past life despite being a woman in the series proper. SOS claimed Haruka and Michiru were "not lesbians, but former lovers ironically reunited as the same gender." [7] This led to SOS being branded as homophobic, and the article was subsequently removed. The Prince Uranus rumors died down when Naoko Takeuchi officially stated that Uranus and Neptune were indeed lesbian lovers.

Other things they were known for were for their "Procott" which involved buying Unfrosted Strawberry Pop-Tarts and ignoring the fact that in 1997 the last 17 episodes of the second season were dubbed into English and aired in Canada before they aired on US TV almost a year later!

Sailor Moon has been popular for cosplay both inside and outside Japan for 2 decades.

One of the largest online fanfiction archives was A Sailormoon Romance, which was founded in the mid-nineties and succumbed to a server crash in 2007. The site has been semi-resurrected with some of the original fanfics as well as some essays on fandom history.

Naoko Takeuchi collects fanfic. In her authors notes, she encourages fans to continue writing fanfic for her universe. [8] 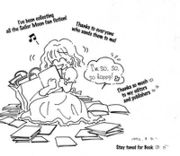 Naoko Takeuchi approves of fanfic. Image from chapter 9 of the Sailor Moon manga.

In its heyday, Sailor Moon fandom was home to many a fic classified as "badfic" that fell into two categories.

Over time, fans became more forgiving of the first category, due to even the best fanfic writers starting out just as badly and needing to hone their talents. While the squick and horror of the second category still remains, certain works spark nostalgia in some older fans.

Various forms of fanart dedicated to Sailor Moon fandom is extremely popular. There are various websites that feature Sailor Moon fanart, but Deviantart has a large collection too.

As a widely known anime, Sailor Moon is a popular source for both single anime videos and multi-source projects, with over five thousand videos currently listed at animemusicvideos.org. The attack sequences are particularly useful for dance amv's, such as Premonition Studios' Elvis vs. Anime. The series also comes up often for loving parody, one notable example being Doki Doki Productions' [Senshi on Springer] that mixes together footage from the Jerry Springer Show as well as the series.

This game was created by Sailor Moon fans accordingly to screenshots of the actual Sailor V arcade game shown in the Sailor Moon anime (episodes 02, 08, 29, 31). Accordingly to Sailor V manga volume 2, Sailor V game arcade machine was brought into Game Center Crown by Artemis so that Minako could train her warrior skills.

One of the main goals in development was to reconstruct Sailor V game as close to original as it is only possible. All Sailor V's movements, enemies, animations, backgrounds, music from the original game are included into this fan-made game. [9]

Fan games for Sailor Moon are quite common, and many can be found on Sailorvgame. (A few are located on the new version of the site. Click on the "Games" menu for a list.)

Online Trading Card Games for Sailor Moon is one of the most commonly created. The most notable ones are Moonlight Legend by Rahenna (along with Tiny Legend a sister site to ML) and the first Online TCG is Senshi Card-Mania! R by Calico.