The term manga (Japanese: 漫画, whimsical pictures) generally refers to Japanese comics in Western countries, and is used as a synonym for "comics" in Japan itself.[1] Occasionally Japanese artists will insist on a specific terminology, similar to some Western artists distinguishing between "comics" and "graphic novels". English-language comics that have been heavily influenced by the style of manga are often called Original English-language Manga (OEL manga).[2]

In Japan, it's fairly common for manga to be made into anime, so that while there are many fandoms with manga canon, in most cases the fandom is based around the anime, which generally achieves wider release, and may be acquired by an American company for translation and distribution, or, more recently, for translation and TV broadcast. However, it is not equally likely for all genres and demographics of manga to be adapted. (See below.) One of the first manga to be integrated into media fandom was From Eroica With Love in the late '80s - early '90s.

Manga and anime fandom tend to greatly overlap, especially since many anime are close adaptations of manga stories. Fans will occasionally use the term "animanga" instead of just anime or manga, showing the close association between the two mediums. Many fannish practices, such as Japanese word usage, are shared between anime and manga fans. Some fans may consider themselves fans of solely one over the other.

Most manga in Japan are first printed in installments in weekly, monthly, or quarterly manga magazines. These magazines are divided by demographic, with the vast majority being either shounen or shoujo. There are also many seinen magazines and some josei ones. (These four categories correspond roughly to boys', girls', men's, and women's respectively.) In addition to these categories, there are BL magazines (which may or may not be considered to be a subset of shoujo), unisex children's magazines, and some specialty magazines, many of which are only partly devoted to manga. (For example, a magazine for pachinko afficionados might contain pachinko-themed manga in addition to articles, pictures, and interviews.)

Manga featuring male/male sexual content exist for both straight female and gay male demographics. The former has been known variously as shounen ai, june, BL, and yaoi. The latter is known as bara (the word for 'rose' in Japanese). Only the former commonly has any English-speaking fandom.

In the past, it was rare for Western manga fans to have access to or awareness of manga magazines. Mostly they encountered manga either in the form of professionally translated manga (which is usually in a graphic novel format), scanlations (where the original format is often unclear), or Japanese-language compiled volumes of various sizes. Because of this, the terms 'shounen', 'shoujo', 'seinen', and 'josei' are often applied based on the content of a series rather than its original target demographic. Individual fans and websites differ on whether they consider these legitimate loan words that have a new meaning in English or a misuse of Japanese words.

As Western fans gain more awareness of manga magazines, it is increasingly common to see people using the demographic terms in the Japanese manner.

Historically, fans in the US have usually gotten into manga through anime. This is still common today, and many other countries show the same pattern. Manga licensed for professional translation into English usually target this market. However, manga that have anime versions--the manga most likely to be popular with English-speaking fans including scanlators--are only a small fraction of the overall manga market in Japan. These manga series are comparable to Hollywood blockbusters: many of them are very good, and some of them are aimed at a mature audience, but very few of them are experimental or edgy or cater to niche markets. The entire manga industry is comparable to the US novel publishing industry both in the range of subject matter covered and in the presence of many niche markets.

In particular, manga aimed at adult women are disproportionately unknown in the West. Shoujo and seinen are much better known, but these manga demographics include a much wider range of subject matter and art styles than is found in the anime versions. Shounen is both the best known and the most well-represented. 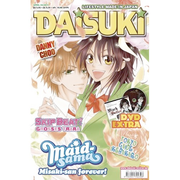 Germany (and by extension other German speaking countries) has been introduced to manga through the TV-airing of anime such as Sailor Moon or Dragonball. In addition to a rapidly growing popularity of non-erotic manga, a considerable BL manga boom started with the publication of Bronze/Zetsuai in 2001 as well. The German speaking animanga fandom developed quickly, fanartists emerged en masse, some of them went professional[3], and German publishers[4] started printing their own manga magazines in the early 2000s, such as the Daisuki (2003-present), a shoujo magazine, and the shounen magazine BANZAI! (2001-2005). They featured German comics (often in manga style) side by side with Japanese ones. This has led to an increased awareness of the publishing of magazines in Japan among German fans. Magazines as well as all other manga publications in German are printed to be read "backwards", i.e. like the original Japanese manga.

There are no manga-only conventions although many fans all over Germany, Austria and Switzerland meet in smaller circles, often called Manga-Treff or similar. In various cities there are also smaller organized events to sell comics and manga[5]. The big annual conventions all include anime as well. With the increased success in manga publication, however, it's not uncommon to have fan gatherings at the big book fairs, such as in Frankfurt or Leipzig, to cosplay and meet with other manga fans.

Manga on the International Scene

Manga are popular all over the world. Wikipedia lists some countries with manga publishers: France, Brazil, Indonesia, Russia, Singapore, and Thailand, among others. Events like the North American manga publishing boom of the late 1990s-early 2000s give some fans the impression that manga are of primary interest to English-speaking Europeans and Americans. This is false. Both licensed, commercial manga publishing ventures and bootleggers have existed in many countries at many times. Fan translations and scanlations also exist in many languages. Money, internet access, and local publishing industries affect how easy it is for fans to gain access to manga, but its popularity is widespread, even in many places where access is limited.

What some fans refer to as "raws" are actually manga which have first been translated into Chinese.

Fans from around the world translate both official and fan-made products into their own languages.

As just one example of how far some manga have traveled, consider the SBS in chapter 237 of One Piece. 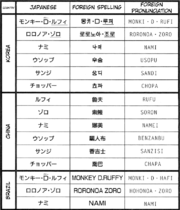 One Piece characters as they're known around the world. 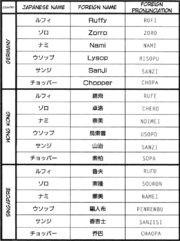 One Piece is known internationally, and has fans from over the world.

Other Types of Japanese Comics

Some artists in Japan refer to their work as 'komikkusu' (comics) rather than 'manga'. These artists may publish in magazines that do not fall within the shounen/shoujo/seinen/josei framework or in other formats (e.g. first printing in graphic novel form instead of first publishing serially in magazines). The word 'komikkusu' is also used as a general term for all comics regardless of national origin, especially comics that are collected in books (as opposed to individual manga chapters in multi-series manga magazines). This term may indicate that a work is highly experimental or just that the speaker is a bit pretentious. 'Gekiga' is also used as a more sophisticated alternative to 'manga'.[7]

Yonkoma or 4-koma ("4 cell") is a Japanese comic strip format.[8] Artists working exclusively in this format are usually published in newspapers or other non-manga magazine contexts, and the subject matter is often ruminations on middle age or daily life, usually presented in a humorous manner. The style is sometimes used by more traditional manga artists for gag sections of longer manga. Yotsubato, for example, features an entire 4-koma chapter.

In the West, it is common to see people describe manga characters as "looking white". This has been used to justify casting white actors in live action adaptations of some series, and is a frequent source of wank. In her article Do Manga Characters Look "White"? (archived), professor of manga Rachel Thorn writes:

Japan, however, is not and never has been a European-dominated society. The Japanese are not Other within their own borders, and therefore drawn (or painted or sculpted) representations of, by and for Japanese do not, as a rule, include stereotyped racial markers. A circle with two dots for eyes and a line for a mouth is, by default, Japanese.

It should come as no surprise, then, that Japanese readers should have no trouble accepting the stylized characters in manga, with their small jaws, all but nonexistent noses, and famously enormous eyes as “Japanese.” Unless the characters are clearly identified as foreign, Japanese readers see them as Japanese, and it would never occur to most readers that they might be otherwise, regardless of whether non-Japanese observers think the characters look Japanese or not.

It shows the ways in which manga artists make foreigners, including caucasian foreigners, look distinct from the default Japanese characters. It also shows examples of Japanese celebrities that particular characters are based on or are said to look like.