From Eroica With Love

You may be looking for the series of zines of the same name, From Eroica With Love.

From Eroica With Love, or Eroica Yori Ai o Komete is shoujo manga by Yasuko Aoike. It originally debuted in 1976. As of 2012, 39 volumes had been published in Japanese. The first 15 volumes have been professionally translated into English and published by CMX, a subsidiary imprint of DC Comics, years after the first fan translations were circulated. After that, CMX manga line was cancelled and currently no publisher is bringing Eroica out in English.

Further volumes are available in English from various online sources, having been scanlated by fans. [1]

Adding to its rareness, unlike other long-running and successful mangas, it has never been adapted into an anime (or any other non-comic media form such as live-action), it has been cited that Yasuko Aoike is not a fan of animation.

The series originally starred three teenagers with supernatural powers named Sugar, Leopard and Caesar, who crossed paths in issue #1 of volume #1 with art thief Dorian Red Gloria, known as Eroica. However, when Klaus Heinz von dem Eberbach, uptight NATO major, appeared in issue #2, his relationship with Eroica was so dynamic and compelling that they quickly became the two main characters of the manga, and Sugar, Leopard and Caesar vanished completely.

Since Dorian is openly gay and makes no secret of his feelings for Klaus, the manga is popular among Western slash fans.

When they first meet, Dorian and Klaus butt heads over the inherent worth of a painting that Klaus owns. Dorian feels that its artistic value is priceless, while Klaus thinks of it as being worth about the same as a tank. Each is infuriated by the value system of the other, and they loudly profess their mutual loathing before Klaus throws Dorian out. Dorian decides that Klaus is an unforgivable philistine and steals his painting. From this point on, they are sworn enemies.

However, only one issue later, in issue #3 of volume #1, Dorian and Klaus (along with Caesar) find themselves trapped on a freezing island with only a tank for shelter. Forced into close proximity, Dorian realizes that Klaus has his own sense of aesthetics, and his own passion for the things that matter to him. This marks the beginning of an appreciation for Klaus that soon grows into a consuming passion. Although at first Dorian mostly seems to enjoy irritating Klaus, soon he openly declares his love, and spends the next 20 or so volumes trying to "get" Klaus any way he can.

Klaus responds to Dorian's overt pursuit with everything from homophobic slurs and personal insults to physical attacks, at one point even holding a gun to Dorian's head. However, the antagonism of their relationship is punctuated by the occasional moment of quiet understanding, mutual respect, or even gratitude on Klaus' part for Eroica's help with a mission.

An overview of the series with sample pages was posted to scans daily on Feb 3, 2013 and can be read here.[2]

The names and appearances of some of the Eroica characters are an homage or reference to the members of Led Zeppelin, a band that was at the height of its popularity when Yasuko Aioke was creating her characters for From Eroica With Love. Dorian's curly blonde hair makes him a ringer for Robert Plant, while James' dark, permanently-tousled hair and Bonham's mustache resemble the mid-seventies appearances of Jimmy Page and John Bonham.

Early in the manga, Dorian also sometimes traveled in an actual zeppelin, but it has not been seen in later volumes.

More on the connection between Eroica and Led Zeppelin 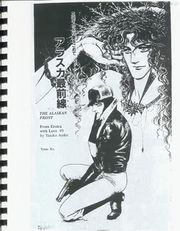 translation credit page for From Eroica With Love issue #9

One fan involved in early scanlation efforts was Lily Fulford. She, along with others, translated under the group name "Kx." Some of these early scanlations can still be found here without credit. They can be found on Fanlore here: From Eroica With Love (fanzine)‎ .

In addition to published fanzines there was an informal circuit of paper stories circulated from fan to fan by mail (and later by email). One example is the story Watching Me Watching You.

Fansites often include fanfiction, fanart, resources and links to other fan sites.