Marilyn Cole is a fan artist who has been illustrating fanzines since the 1980s. She has also written fan fiction which has been published in fanzines. 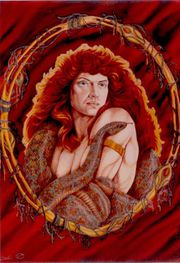 In 1974 I discovered Star Trek fandom. Back in those long ago days, the only way to track down a convention was to go to a local bookstore and hope a fan left some flyers. Since I traveled throughout the US in my career, fandom became my lifeline of friendship. No matter what city I was in, I could say the code word “Star Trek” to someone and if they knew what I was talking about we were instant friends. I had always loved to draw so it was natural to start drawing Kirk and Spock. As I discovered more fandoms, I discovered more friends; and life on the road became even more pleasant and joyous. [1]

Marilyn Cole has inspired a number of other fanartists. One of them, Shelley Butler wrote in 2007:

“I was so blown away by [K/S art]. I loved it all, although I had my favorites. One of the very first covers I ever saw was a Marilyn C. showing a winged Spock lying at the bottom of a cliff with a waterfall. I was so amazed by that, and so excited that I bought the zine without knowing or caring what was in it! And I forget who did the artwork, but it was a cover that showed Spock on a horse and Kirk on a leash with a collar and a tent with a L’Matya. I thought that was the most amazing thing I had ever seen and I’d stare at it endlessly.” Oh, how that takes me back to my own early fannish days and how I was so fascinated by drawings of Kirk and Spock, how I’d stare at them, think about them, dream about them—sigh! [2]

From the 2007 article/interview Scribbling Women: Artists Talk Back

What inspired you to draw K/S?: Marilyn C. tells one of those lovely stories of co-incidence so common in fandom. “As an ecdysiast I traveled a lot. Star Trek fandom provided a home no matter where I went. I’d search the phone books and the bookstores in each town for anything related to sci-fi or Star Trek. Wherever I went, I could find a Star Trek fan. In Berkeley, in 1971, on Telegraph Ave, I found a little store devoted to Star Trek. But it was in the bookstore across the street that I saw a flyer for a Star Trek con in San Francisco. A convention!! My first one ever! Five thousand of my closest friends were going to be there! So I went to Bay Con and there I saw my first K/S zine. ‘What is this?’ I cried. ‘They do what together? Wow!’” I think we get the picture!

Had you seen other K/S art when you drew your first K/S picture?: “All artists in fandom influenced me. There was always some little insight that would inspire me. Artists outside fandom influenced me too, indeed some of my favorites were Whelan, Donato, Edward Gordon, Rowena, and all the Pre-Raphaelites.” Marilyn, I love the Pre-Raphaelites too, I actually did a project at university tracing the history of Sci-Fi illustration from the Pre- Raphaelites to K/S! I don’t think I convinced anyone except myself!

What kind of things do you try to express in your art? Beauty? Sexiness? A good likeness?: “… for fandom, a good likeness seems to be the most important thing. Then I try to portray the emotions of the story. When I am asked to do commissions I talk with the writer/editor and try to understand what they saw in their hearts and bring their vision to reality.”

Do you draw from your mind’s eye or do you use some kind of source material?: “...my husband at the time was a body builder and he posed for most of my illos.” Now I’ll bet you didn’t know that! So now we know where Marilyn’s Kirk and Spock got their muscles from. Thank you, Mr. Husband, wherever you are!

Were you conscious of the difficulties of reproduction which choosing a medium? Marilyn shudders at the mention of reproduction! “What a horror that was back in the dark ages,” she exclaims, “remember, no PCs, no internet, no email, no cell phones. Color was expensive to reproduce, so most illos were done in black and white. I drew on coquille board which had an imbedded pattern in the paper. This enabled me to render the shadows in a way that would print nicely. I used black wax based pencils, since graphite in an ordinary pencil would reflect back in the Xerox machine. I remember when the scanner was first introduced. ‘Wow. What will they think of next?’”

What is your favourite medium?: Marilyn C. experimented with several media, exploring other possibilities because of physical limitations. She explains, “I was injured in a car accident in 1987 and spent many years recuperating. I had limited movement during this time so I used pencils because there was no mess and no clean up. They were easy to hold while I supported my arms on pillows. I loved creating tiny details, it became meditative, easing the pain in my body a little. After a few years, when I could sit up for longer periods of time, I tried acrylics. But since I still moved slowly, they dried too fast. I switched to oils but they took so long to dry, I’d have to let a picture sit for a few days before I could work on it again. I’d start another picture then forget what I had been doing on the first. Then I found alkoids and loved them, they had the perfect drying time. But then American stores stopped carrying them and it was too time consuming and expensive to order them from Europe. (Remember: no internet, no cell phones, etc.) So I went back to pencils and I still paint in a combination of watercolor and pencil.”

A Writer as Well

While Marilyn is perhaps best know for her artwork, her fan fiction contributions have also been favorably received. In a 1986 review of her story "Seed of the Triad," one fan said:

Marilyn has given blanket permission for her art to appear on Fanlore. Please see Talk:Marilyn Cole.