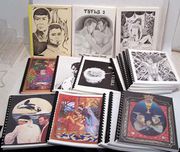 T'hy'la is a series of Kirk/Spock slash anthologies published by Kathy Resch. The first issue was published in 1981 and continued through 2015.

The title is derived from the infamous footnote in Gene Roddenberry's novelization of Star Trek: the Motion Picture, which gave fandom the Vulcan word "t'hy'la for friend, brother and/or lover.

From Kathy Resch ("T'hy'la's" editor) and the zine series' start:

In 1980, there were no ongoing K/S zines in the United States...There was only one thing to do about this dearth of K/S — I needed to do a zine of my own. Clearly, if I was going to be able to read K/S on a regular basis, the best possible thing to do would be to provide a home for it. I announced that I was looking for submissions for a new K/S zine, T’hy’la. I wrote to everyone I could think of asking for stories, art and poetry, and published my first issue in 1981.[1]

For more of Kathy Resch's comments about the production of "T'hy'la," see: My 30 Years in Trek Fandom.

Sample artwork is displayed on Fanlore with the publisher's permission.

A 1982 ad in the gen zine, Riders to the Stars #1, listed the last names of the tribbers and stated that "AN AGE STATEMENT IS REQUIRED" to purchase. The ad did not mention that the zine was slash. This may have been 1) an oversight, 2) a conscious choice, 3) or because readers did not require as much warning for content in 1982 as fans do now.

One of my first slash zines was "Thy'la" and after picking myself off the floor after every paragraph and squealing (to my SO's bewilderment) I was hooked.[2]

Praise for the Art

T'hy'la features a lot of gorgeous fanart. Here are some reviews:

cover of issue #17, by Shelley Butler, "On the Bridge"

"On the Bridge" is a piece by Shelley Butler and is featured on the cover of issue #17:

I can only guess at how long such a picture took Shelley to draw, it seems to me that the detail in it must have taken ages. Here she perfectly captures the feel of the bridge, with the captain leaning over the railing to gaze at his first officer seated at the science station. We see Spock's face in perfect profile, the sheen of his hair, the way it's cut so perfectly in the back... Kirk is facing us with his hands folded, looking very open to Spock, obviously looking him full in the face. But I get the idea his eyes aren't exactly focused on his first officer's eyes, his vision is more an all-encompassing one. He is oh-so-seriously considering whatever it is that Spock has told him, but he's also taking in more.... This picture makes me feel very much at home, as if this were a true vision of the way things are, down to the three other figures in the background tending their duties as good Starfleet officers should, letting their captain and his Vulcan commune. I also like very much the perspective of the picture, sort of looking out from the science station. One expects the POV of the viewscreen for this sort of picture, but Shelley decided not to take the easy, typical way out and gave us something unique instead.[3]

More on "On the Bridge" by Shelley Butler:

My eyes widen with appreciation, my jaw drops in wonder. How does this artist do this? Photo Realism is one of the hardest forms of artwork to achieve and this woman achieves in spades. Look at the details, pick out the strands of Spock's hair, note the texture of both men's tunics; that's velour, not cotton, not satin. Shelley's gift for rendering an object as we see it is remarkable. This is a thoughtful captain in one of my favorite poses...leaning over the railing by the Science Station quietly listening to a report from Spock. Look at Kirk's face; eyes and attitude all 100% concentrated on the Vulcan. And Spock's pose itself returning that concentration and the riveted eyes. Even now just remembering this drawing I can hear Spock's voice in my head gently imparting some fascinating bit of information to his captain. This is much more than just a drawing (as if any of Shelley's work could be labeled 'just a drawing'), it tells a story, it makes us wonder and think...and that is the function of an illustration.[4] 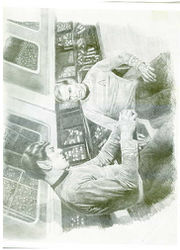 The front cover of issue #19 was done by Shelley Butler. A fan comments:

A wonderful study of two officers, on the bridge of their ship: Spock contemplating the comp slate in his hands, or something Kirk has just said: Kirk contemplating Spock with a serious look, conveying trust, expectation, and I'm sure, love. It's an intense gaze that may say, "I'm waiting, Spock." Has he asked for complex coordinates or a clandestine meeting after shift? One may imagine whatever one chooses, all the while adoring this living room acceptable piece done in loving, Shelley style and impeccable detail. Instruments, finely veined hands, perfectly downcast eyes (Spock) and piercing gaze (Kirk). Everything or anything could rest on this moment.[5] 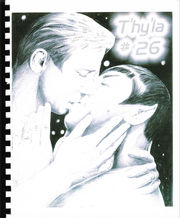 cover of issue #26 by Marianne Mueller

Marianne Mueller's work appears on the cover of issue #26.:

The covers of this splendid zine warmly wrap its pages in beauty, imagination and love. Kissing is my favorite thing for Kirk and Spock to do and these large close-ups of the two men certainly satisfy that hunger. The one in front is terrific. It captures a moment that will be in my mind for a long time. Spock has a ring on! I love that! His fingertips are touching a place on the underside of Kirk's face, tenderly. Kirk's hand cradles his lover's face and neck. We can tell they are embracing each other gently in prelude to some special loving Excellently executed, sensitively composed, and all in black and white which I love. The back cover seems to be after their lovemaking. Spock's expression as he gazes up at his bondmate is full of adoration. Kirk is drawn so perfectly we know he is worthy of his Vulcan's devotion. Satisfaction delineates their features, again in black and white. Then in the right hand lower corner they are clothed and depicted in color in their uniforms. Spock's arms are around Kirk's waist, Kirk's hand covering Spock's. Sigh...I could look at these covers all night and nearly did.' [6]

For other Print Shop Adventures, see Slash and the Challenges of Finding a Print Shop. 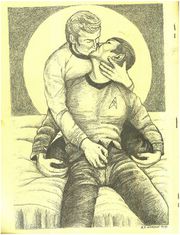 Two local Trek fen were publishing a zine called The Other Side of Paradise, and one of their issues was X-rated (het). I asked their advice, called their printer for a quote, and then took the finished zine in to be printed. The print shop was a wonderfully funky little hole-in-the-wall place in Oakland. They had a “mascot” named Phred, a brindle-colored Great Dane who had the run of the place. Their primary business was to publish limited run books and study materials for the University of California at Berkeley. They were set up strictly for book publication—no business cards or wedding invitations. They had the specialized machinery necessary to do that sort of work. It was, I admit, a bit difficult to go in there for the first time. I was a bit...embarrassed. But the people who owned the print shop were as cool as they could be....Back then, it took about two weeks for a printer to print a zine. An odd thing happened during the two weeks T’hy’la 1 was being printed. I got several phone calls and letters from people asking me if I knew what was being said about that Horrible Nasty Zine that was being published. (People think the internet is fast, but the telephoning abilities of fans in early fandom cannot be underestimated.) Person A, a Big Name Fan who ran a fan club for Unnamed Trek Actor, was pitching a fit about this Horrible Nasty Zine and was asking fan club members to basically swear a “loyalty oath” that under no circumstances would they ever have anything to do with said Horrible Nasty Zine or K/S at all. (Almost all my tribbers were members of said fan club.) I finally filled in the details of this mystery when I went to pick up the finished copies of T’hy’la 1. Person A was doing a club zine, and had gone to various Bay Area printers for quotes. When she got to my printer, he told her—with a great amount of glee—“We’re doing one of those right now!” He brought out the back cover for her perusal. Not the front cover, with its nice tame drawing of K&S side by side. No, the back cover, with K&S in a liplock. Person A nearly had an attack, and then began spluttering all sorts of threats and imprecations. I take it the end of Western civilization was involved. My printer, being the ex-flower-child and complete iconoclast that he was, got a huge amount of entertainment out of this. (He didn’t get her business. But he got all of mine in the future.) Person A was determined to root out this evil. All that happened was that my tribbers who were members of her club went ahead and swore her loyalty oath, then made sure I was using their correct pseudonyms. I never heard directly from her, and since I wasn’t a member of the fan club in question, she couldn’t expel me. My printer really enjoyed printing my zines. By the time I’d done my 3rd or 4th issue, he told me the women in the bindery always looked forward to my zines. They’d post prints of the artwork on the bindery walls to keep them entertained while they worked.[7]