Riders to the Stars

Riders to the Stars is a gen Star Trek: TOS (with a fantasy slant) anthology.

The title of the zine series comes from a Barry Manilow song.

The entire zine's pages are printed on only one side, something the editor noted will be remedied in the next issue, also see "Kor's Folly" below for more on production woes plus a plea:

... to let you all know that I go the one-side problem solved for future issues to be put out by the T'Elfie/T'Ciao Press. It just took a while for this old, tired mind to clank over. But one side will be done via the DC-131 (along with all the art-work) and the other [side] via the mimeo.

Now as to the way RIDERS is laid out; it's either going to be back-to-back like everyone else's zine—or one-sided. The one sided bein' due to the fact of the Mita DC-131 drying out the paper the second time through (to get the back side, see). Am trying the technique of setting it aside to regain moisture, with a vaporizer going in the same room. If it works fine — if not, I tried. Believe me — you wouldn't like the wrinkles! But with the paper running me only about a penny per sheet... And the "other" machine ran 2-3 thousand bucks more, (I just couldn't see borrowing that much more — I just couldn't...) Plus I just couldn't afford to continue my "poor house" relationship with THE printer. Besides, barring that one complication, Mita makes darn good copies. 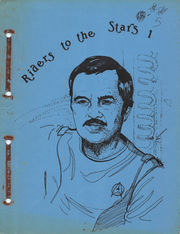 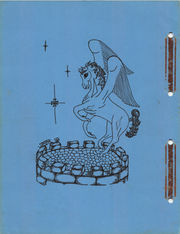 back cover of issue #1, Vel Jaeger

As you can see (well, if you're reading this, obviously you do...well...right? Uummm...hey, Spock...was there something you failed to tell me? Oh...my humor's off, is it! Well...I never...) somethings have been continued over from the TREK CONTINUUM. Actually, I just couldn't come up with a more suitable heading for this section. It fits to a "t".

KOR'S stuck around too, you will notice when you reach the end of this... this... thing. And, speaking of Kor, have any of you noticed his losing streak? I mean, the dear Klingon struck out with Kirk, the Cylons (BG), and later still with the weather machine (General Hospital; Luke iced him). Makes one wonder why he keeps trying... uummmm...for that matter, why do I? I don't think I shall ponder that thought. Nope. No way. I'm still trying to figure out why I'm attacked to tall, brown, and shaggy—Chewbacca. Course there's tall, dark, and feathered, too—Hawk.

I shall drop the subject. Prompto!

The poem, "Joys of Being The Trek Lit Writer"

JOYS OF BEING THE TREK LIT WRITER

Me trying to write in the bedroom
Kids blaring TV in the den
How to write about Spock
When you're watching the clock
So you won't forget dinner -- again.

Clothes piling up in the hamper
Dishes stacked up in the sink
But how can you stop
And take care of these things
When you've left Kirk and Spock on the brink?

So I rescue them while I cook dinner
I have Bones heal their wounds while I eat
While in the shower, they warp out of orbit
Hell, I'm going to bed now --
They're safe but I'm beat!

As no doubt you have all noticed by this time this zine is printed on only one side of the page. I tried the vaporizer but alas...to no avail. They looked as if a sehlat sat on 'em, scrimmed a bit, then plopped down. (Do sehlat's plop you ask. T'Elfie does. Does T'Elfie ever..,!) Okay. This factor only ran the cost of the zine up a dollar. True...a dollar is a dollar is a dollar. But—and I always have a 'but' available—if I had went to the printer with this issue each page would have run 14¢ page, to my 10¢ page. You figure out the cost difference. Once the copier gets paid off—the zines should drop about $5.00 a issue, barring inflation.

Now, if ya don't like that particular kettle of fish. T'Elfie's willing to take donations toward the cover price of $2000.00 — the cost difference to purchase a copier that prints both sides, with this one as a trade in.

The only other justifications I plan to make about this issue, are that the extra bindings are free of charge. And my apologies for the lightness of certain pages. My fault intirely [sic] — I didn't change my typer ribbon soon enough. I'll have that corrected next time out. I also plan to have something done about the letter "k" on this machine. It doesna hit hard enough. As for that, I believe, that the contents of the zine should have made up for its non-conformity.

Next time out I also plan to use heavier paper for the covers.

Course, if I make this long enough I'll be able to show you what I mean by the term wrinkles. That is, unless, the DC-131 decides to make me eat my words. I put nothing past a machine. At least none that are within my possession.

Riders to the Stars 2 was published in September 1983 and contains 123 pages. 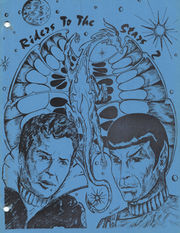 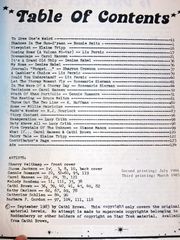 back cover issue #2, art by Shona Jackson
From the editorial:

I think this issue of RIDERS is better than the last. (And, believe it or not, RIDERS #3 is filled already; it's just a matter of artwork and of me finding the time to get to it. And, not only that, but, we're working on filling up #4) First off, this zine's been proofed by eyes other than my own. Second, there's no mimeo, which might leave a few wrinkled pages. I tried it out on THE MacSHANNON CHRONICLES, but did like the company said and let the paper sit for a few days after the first run through the machine; found out it worked better just to turn around and run it through. And third, the material itself--'course we all have our favorites, including me.

I want to thank all who helped with this issue, contributors and proofreaders alike. And a round of applause for Gennie who supplied me with the material to make up the border design. Not to mention her "Wrath of Khan" portfolio.

Shelly, Elaine, Carol, and mom. Thanks. (They came through when I asked them to proof for me.; As with the last issue of RIDERS there is a Contributor's Page toward the end of the zine. So write your comments. That's how we all learn. And let me know what you thought of this issue too. LoCs are welcomed.

I also did away with the half—space between paragraphs in this issue. It saves on paper, and every little bit helps. And if some of you are wondering why the price is so different with some zines; like the thicker ones being cheaper at times then the smaller ones. It all depends on when the copier goes on the fritts. Or breaks down, in other words. A contingency fund I still haven't mastered.

Riders to the Stars 3 was published in October 1985 and contains 104 pages. 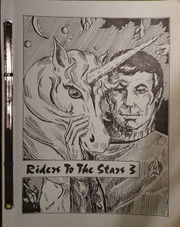 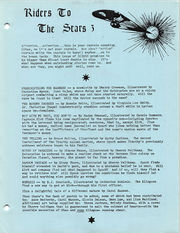 front page of a flyer for issue #3 (it was printed in issue #2) -- NOTE: about half of the content on this flyer ended up not appearing in issue #3, perhaps it was postponed for issue #4? 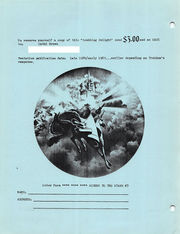 The art is by Sherry Veltkamp, Christine Myers, Carol Hansen, and Kathy Carlson.

Riders to the Stars 4 was published in October 1985 and contains 118 pages. Includes novellas by Bonnie Reitz and Nadya Emanuel. 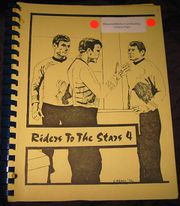 Riders to the Stars 5 was published in November 1987 and contains 224 pages. Novellas by Emanuel and Crowson; stories by Slusher, Smith, others. 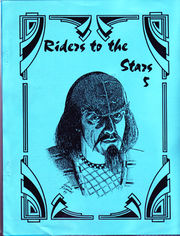