Vel Jaeger was a well-known and prolific Star Trek: TOS fanartist and fanwriter. 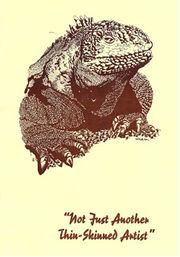 "Not Just Another Thin-Skinned Artist." 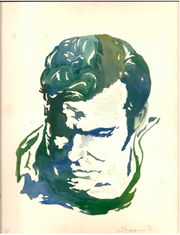 "Verdant Dreamer" -- original art used in Naked Times #4/5 for the story The End of the Beginning -- The artist says: "This is one of my favorite creations, which became the design for a 9-piece project (portraits of the Kirk/Spock/McCoy triad, based on images from ST:TOS, TMP, and TWOK) during my 4th semester of Printmaking at Mira Costa College in California. I took one semester of Watercolor, during which I labored like Hercules to produce something I didn't want to shred on completion. I'm not a very patient person, and learned why that medium is rightfully considered among the hardest of all." [1] 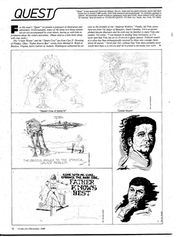 Vel's art in a 1980 issue of Starlog had this caption: "Finally, the Trek caricatures [2] are from Vel Jaeger of Beaufort, South Carolina. Vel is an accomplished fanzine illustrator and this style may be familiar to, many Trek-zine readers. Vel writes: "I was hesitant in sending these enclosures, as I've never seen Star Trek fan art in STARLOG's Quest feature. Trekkish material is often less than enthusiastically received by those who consider themselves SF purists." Never fear Vel - without Star Trek there probably never would have been a STARLOG and we're proud to showcase your work."

Vel’s first SciFi con was 1975 in West Palm Beach, Florida, where she made her first Trek encounter: George Takei. She also entered her first costume contest, with her designs placing first and third. Vel was also asked to be a staff photographer on the very first Star Trek cruise, and then by Joe Motes of Vulkon fame.

Jean Lorrah was the first to publish Vel's art as the back cover of NTM Collected. Vel was published in a section in the early issues of Starlog Magazine called Fan Fare, which introduced fan talent in many forms - her submission consisted of two small pen and ink vignettes of Kirk and McCoy. They were printed in 1980, her first and only appearance in a national publication.

Vel's first fiction was "A Diplomatic Relationship" in R & R #13. In 1987, she wrote that Joanna Cantor "took my very first story and treated it with tender loving care. [Her] skill seemed to be the ability to improve without interfering with either the author's intent or style. A rare commodity indeed." [3]

Vel was proudest of founding TREKisM, the Star Trek Special Interest Group (SIG) for Mensa, the high IQ society. In addition to 68 issues of varying lengths from 1977 to 1991 were a number of lengthy anthologies and novels known as “TREKisM at Length.” Issue #X has been in limbo, along with a fourth volume of “Trek Encore," a retrospective of the author, Ginna LaCroix. The “Trek Encores’ were a publication of In Case of Emergency Press, the brain child of sometime co-coordinator and co-editor Kim Knapp. “Between the Sheets” (BTS) was published under the aegis of “Encore Enterprises.”

In the years before her passing, Vel expressed her "hope for the not too distant future is to reestablish the Star Trek SIG in Mensa, now that the web has made communication so much easier than in the days of snail mail. In the meantime, she has given Fanlore permission to reproduce any and all of her artwork, writing, or photos for the purposes of documenting both her involvement in fandom and fandom history in general."

In 2007, Vel was interviewed for an article about the history of K/S art. When asked what inspired her to illustrate Kirk/Spock, she replied:

"What inspired me? This is an easy one: the obvious magnetism between them, as complex as an artist/writer wants to delve into and elaborate. On the surface these are damn good lookin’ men in the prime of their lives. Their sexuality positively drips off their bodies.” For someone who talks about bodies here, Vel did a lot of portraits of Kirk, so I asked her about this preference. She explains, “Favouring Kirk is unusual because his (Shatner’s) features are the most difficult to depict; they’re very subtle with no hard lines or unusual characteristics. I always work with copies of photos as guidelines, sometimes exaggerating the contrast to remove the mid-tones and reduce the image to only light and dark." [5]

Vel’s style was always very original but she too was influenced by other art she saw. She writes, “when I first began communicating with editors I was very impressed by Gayle F., one of the rare “triple threats”—editor, writer and artist. And very kind and encouraging in responding to a neophyte. She complimented my art as “Bizzarro” in style—referring to my heavy use of darks and contrast, and told me that her intriguing work was heavily influenced by the Art Nouveau and Art Deco periods. After researching these eras I could see where those movements were reflected in her work, especially the bold sensuality.” [6]

“My strongest skill in art is design, which helps liven up a plain portrait with intricate detail as a background. I’ve always loved the challenge of catching the essence of a person’s face; even if the result is garbage, I’m content when someone says, ‘Oh, that’s ______!’ I try to capture the eyes first—if that isn’t accomplished it’s a waste of time and paper to continue. But I mostly stuck to portraits because you know with three young children in the house I had to be careful. Kids already have too many questions without fueling young curiosity. [7]

The earliest and most easily available reference sources were Starlog and the Trek calendars. Then came trading cards and collectors’ photos, and eventually lots of clear photos for sale by dealers. But sometimes there was the last resort of taking photos off the TV screen: crude, but workable. Having prints made from the 35 mm film clips that were available in the early days was another option. Remember, this was before everyone had a VCR and computers. Dark ages indeed! [8]

Without a doubt pencil is the easiest medium for drawing: mistakes can be erased and it’s fun to make subtle shadings. But from the editor’s viewpoint it was the most expensive to print. Pencil (and ink with a wash—think black and white photos) have to be screened before they can be printed, a costly process 30 years ago in pre-computer days. Even the best screens lost some of the quality of the original. The best medium for offset printing or photocopy is pen and ink, and over the years I came to appreciate the precision that could be attained with it. I used various drawing ink pens (every possible size of Rapidographs) and brushes with India ink for the large areas (okay—I confess I got lazy and used markers sometimes). A toothbrush for spraying with white ink can produce some interesting effects— stellar fields, for instance. [9]

Vel has given permission for some of her fannish memories to be posted on Fanlore. See Vel Jaeger/Memories.

"I guess you could call this stuff from my 'Primitive Period.' I got tired of looking for this list, I suppose, as I changed to writing the zine & story/poem name on the back of the drawings." [10]

I've written far more than anyone would expect, as I keep changing pseudonyms, a different name for each genre: some are probably obvious, such as my art pen name — my style is pretty hard to disguise, but I have fun trying (and no, I'm not going to mention it). Those I don't keep secret are Vera Cacciatore for filthy limericks, though it's been years since I've indulged in them, and Ellen Hulley for poetry/vignettes that I publish in one of my own zines. It's not that I'm ashamed of what I've written, but rather that I think it looks tacky to have an editor's name dominate the contents page — and mostly stuff written to fit an orphan illo, or sometimes I need something at the last minute to fit X number of inches of dead space. It's been one of my biggest thrills in writing that one of those "poems by the inch" inspired a whole new fan universe (TALES FROM THE VULCAN HEARTH), and at least one other story I know of (so far). [11]

Zines in Which Vel's Work Has Appeared