Enter-comm is a Star Trek: TOS anthology published in Canada. 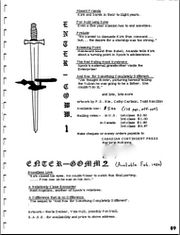 It is one example of a mostly and sort-of gen zine that touches on K/S in a way that thirty years later, some fans may describe as pre-slash.

In 1980, two fans included this zine in their list of K/S stories that they enjoyed.

We have read opinions on the K/S relationship. We believe the best K/S zine was by Susan K. James & Carol Frisbie. It was called Nightvisions. We wish other Trek writers would write these type of zines. We also like the fanzine from Canada called Inter Com [sic] It has a different kind of K/S. It has Kirk as a female. They took it from the episode Turnabout Intruder. [1] That is the kind of K/S we like. So please, all those K/S writers out there — please start writing these type of novels and stories we have mentioned. [2] 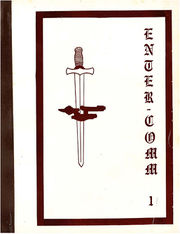 Enter-Comm is produced by Canadian Contingent Press. They present a mixture of stories and articles, including a very funny piece called "The Red Riding Hood Syndrome." [3]

This zine ranges in content from long serious stories to interviews with Jim Doohan and George Takei. It also features one of my all-time favorite humorous tales, "The Red Riding Hood Syndrome", by Susan Smallpiece, which I thought had been previously published by a British zine, but no credit given here. This story features Spock's amorous human grandmother aboard the Enterprise as she sets her cap (as she would put it) first for the Captain, then for McCoy. So skillfully is the theme handled that it never degenerates into slapstick, just pure belly laughter from start to finish. EC #2 ($8.5) and $7.00) has a sequel involving a beautiful cousin of Spock's which is much less successful, though fun.

"Through All The Weary Hours", by Sheila Hawley is a sequel to the tragic "Bitter Sky, Winter Wind" in MATTER/ANTI-MATTER #1, and of course rescues Spock this time, but does so in an unrealistic setting. It purports to have Chekov and Sulu secretly beam down to the planet and succeed where the whole crew and all the ship's technology failed before. For one thing, nobody leaves the ship without the instrument tell-tales recording aid reporting on the fact, as we saw in a number of episodes, and for another, it is too highly coincidental for a mentally impaired Spock to suddenly gain back his mind just in time to save Chekov from the wolves. The writing also suffers from sentimentality and is broken up into short choppy segments.

"Time and Music" by Abigail Waldren offers a thoughtful approach to what would happen to Spock if Kirk died and he were left captaining the Enterprise.

The longest and most impressive story featured in this issue is "...And Now For Something Completely Different" by Sue Stuart, which is based on the possibility that Kirk could have lost his own body when Janice Lester dies in an aftermath of "Turnabout Intruder," and remains the captain of the Enterprise in hers. Naturally there is a romance with Spock, culminating in marriage — and the birth of twins! It's all done in great good humor, very inoffensively even if it does seem strange to keep referring to "her" as Jim. Thought provoking.

There are many short pieces, verses, and much humor, including hilarious jabs at inconsistencies in The Movie. Both issues 1 and 2 are available to date, and #3 is planned for September. A good buy for pure entertainment. [4] 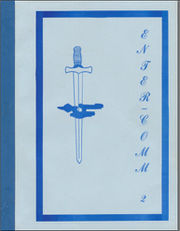 Enter-comm' is a delightful zine from the North Country, our Canadian neighbors. It is beautifully put together, with a certain slant towards K/S relationship stories, though not X or even R-rated, and it is obviously done with a great deal of love... Issue 2 contains several long and short stories, a sprinkling of vignettes, and some fine poetry. 'Difference That Makes No Difference' is the third in a series of stories which started in one of the Gropes. The premise: what would have happened to Kirk and Spock if Kirk had been forced to stay in Janice Lester's body? If one is able to suspend one's belief (something that is often necessary in K/S-oriented stories), the idea works very well. And the author writes quite well also. (A suggestion to the editors: if the series is to continue, it might be a good idea to synopsize what happened in the stories that are now out of print.) The accompanying Pat Stall illos are excellent. There is also a nice, gentle post-'Tomorrow is Yesterday' shore-leave story (with the rest of the bridge crew as well as Kirk and Spock). 'Standpiper' (where HAS this author been hiding?), doesn't pretend to be anything really deep or psychologically probing --just a soft story about friendship and companionship (yes, they are different.) The most powerful story in the zine is 'Boundless Love.' All I will say about it is that it concerns love and death. I don't want to give away any more than that. It's heartrending, and at the same time uplifting. Scattered throughout the zine are 'marginals' that will have you holding your sides with laughter. The 'Enter-Comm ST-TWP Awards' make certain astute, acerbic, yet loving, comments about our favorite movie. The artwork is general ranges from average to excellent, and the reproduction is good... The editors have done an excellent job, as has the typist. Aside from a few problems with knowing where to put the apostrophes and when to use single quotes (sorry -- a couple of pet peeves of mine, although the second may be due to cultural variations between our two countries), this is technically very well done, as well as having very satisfying content. [5] 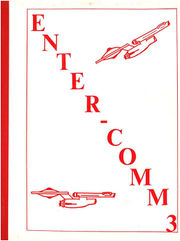 Enter-comm 3 was published in 1980 and contains 152 pages. This issue may have mild same sex themes. 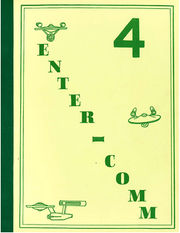 Enter-comm 4 was published in February 1981 and contains 158 pages.

EC4 is a delightful Canadian production that may not be well known among the Midwest fen, as the zine is not listed in the usual zine listings. As one may guess from the opening comment, this reviewer found the zine to be a welcome change of pace from the many poorly produced, insipid story filled zines which are on the market today. (Unfortunately, while fan fiction and art is a labor of love, some is just not very good.) First of all, the price is reasonable, a mere $7.00 in a day and age when one must sell, quarterly, a younger brother to finance a zine habit. Secondly, from a technical standpoint, EC4 was well done. There are very, very few typos. The zine is well-bound so it won't dissolve after the first careful perusal. The print is clear. The layout is very attractive. Very high marks go to the editors for a zine that is attractively done. A third aspect of EC4 which deserves kudos is the excellent artwork. Some of the finest extant artists in fandom have contributed their handiwork, Decker, Moaven, Nim, Verina, Zuk, Lewis, and Carlson are among the well known artists but the work of Pollet, Rosenfeld, Kilner, Karasinkski and Winder are also very good. Lewis tries her hand at a non-stipple portrait which is quite lovely. Rosenfld's photos are particularly attractive. Actually, I found all of the art to be well done, even that by artists whose work I don't normally care for. Lastly, the contents. Here the zine fluctuates widely. Most of the work is quite entertaining. A few pieces stand out: 'Candle in the Dark' and 'Key' are superb. They are well crafted, short and poignant. Rockburn's longer story is humorous but is not as well fabricated as the other two mentioned... The 'Beyond the Mirror' pieces by Maclaren and Martin are very good conceptually but the writing is choppy and the characterization is a bit truncated. Work of this sort should not be broken up in the way it has been... With the exception of one story which I shall discuss momentarily, all of the other work in the zine is very good. There is even a cute story by Hewens (my god! a male writer!)... The only discordant note in the zine is the story 'S'havri.' I have suffered along with Kirk and Spock the whims of writers which include maiming, terrible mutilation, horrible marriages of either to anyone but the other (I am a K/S person if the truth be known), etc., etc., but I cannot abided by what Rosenfelf does to Spock. Having flipped through the zine to look at the illos I knew as soon as Spock got zapped what was coming. Only sheer will power forced me to read the rest of the story! Apparently, the author is not a Spock fan. If she is, how could she possibly conceive of our beloved Vulcan as a .... ??? (Sorry, you'll have to get the zine for more details. Buy a copy of this zine. It is money well spent. [7] 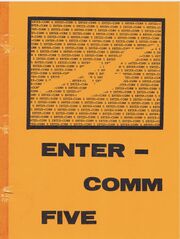 See reactions and reviews for Sunshine for Sale.

See reactions and reviews for Life After Life.

See reactions and reviews for Koloth Hatches His Revenge.

See reactions and reviews for The Reason Why.

See reactions and reviews for A Toast to Innocence.

See reactions and reviews for A Test of Pride.

See reactions and reviews for Truths. 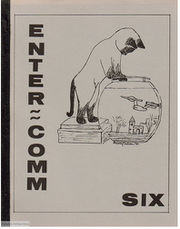 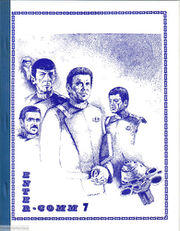 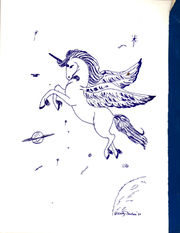 back cover of issue #7, Kathy Carlson

Enter-comm 7 is an anthology edited by Maureen McKenna, Marjorie McKenna, Jacky Fulton, Darien Duck. It was published in May 1984 and contains 115 pages. 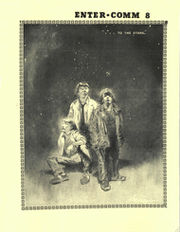 Enter-comm 8 was published in June 1986 and is 176 pages long and contains 19 stories and poems. It won the 1987 Surak Award for Best Fanzine Design. The art is by Emet Morris, Kathy Carlson, Cami Forsell, Desire Gonzales, and Nan Lewis.