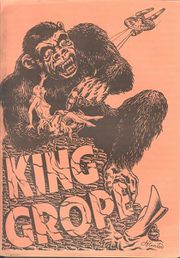 The editor says it will be the last Grope, something that Boldly Writing also notes. There were, however, four more issues published.

It is a sister zine to a eight other "Gropes" as well as Alnitah.

See reactions and reviews to None So Blind.

See reactions and reviews to One Man's Mate.

All are long out of print and difficult to obtain. I sincerely hope that #8 won't be the last, since I quite enjoy the sly humor and artwork, and the offbeat but mature writing. You won't find any too serious/dramatic, overwritten, overly sentimental, sophomoric tear-jerkers here. The editor herself said, in the "Editor's Postscript" to SON OF GROPE: "...the zine as a whole is not meant to be taken seriously, though certain individual stories may bring a tear to the eye, a lump to the throat, a wrench to the gut, or up yesterday's dinner! GROPE began as a light-hearted romp and, I hope, will continue in that spirit. The stories and poems...do not necessarily reflect the views of the editor nor are they intended to present a workable Star Trek universe—not even I think that the big E can function with its First Officer permanently on heat!" Some American readers may find some of the British writing hard to get used to. It should be noted, too, that the majority of stories are not K/S. In this case, the ability to appreciate Infinite Diversity certainly pays off! [1]

A Good Light Read, according to the ineffable Spider Robinson, is something that can compete with the distractions of a crowded bus, with no loss of enjoyment or comprehension. By extrapolation, A Good Very Light Read is a work that won't suffer from the Led Zep's blasting out fifty or so decibels a few feet away, (That's the Zep as in "Boogie with Stu", Gentle Reader, not as in "Bron-Yr-Aur".) This definition fits the last of the GROPE's: there's nothing new here, nothing startling or particularly insightful, nothing to send you wandering about like Hamlet with the book in your hand. What there is, is some solid entertainment, with here and there a slight, uhmm, prod shall we say, at the ol' grey matter.

The issue gets off to a notably unprepossessing start with Ann Looker's own "Eirwen", a stereo- and archetype-ridden tale of a succubus loose on the Big E. Had this been told from Eirwen's own point of view, with proper attention to characterization and a clear deline ation of her conflict between love and survival, it might have been a great deal more. "Diplomatic Incident", unfortunately, is no better, and its would-be sad/ironic-twist ending is given away by the illo.

Next is "One Man's Mate", which pits Kirk's tomcat habits and macho pride against Spock's sense of duty. The basic idea is a good one; it's a pity Marion Dougall didn't develop it more thoroughly. Nil desperandum, though, this is where we start to come to the good stuff, Val College's "The Old Men's Comforts and How They Gained Them" is a marvelously witty parody of Carroll's Alice, complete with illo in the original style. As the British say, it's a giggle.

Ann Snell's "None So Blind" is rather more serious, dealing as it does with a growing sexual attraction between Kirk and Spock. Those readers who find its premise "illogical" would do well to consider the function of pair-bonding in human warrior societies. The story is smoothly written, and its attention to psychological detail makes it easily the best in the zine. Best by conventional lit-crit standards, that is.

Then there's Penny Lansdell's "Natural Selection", an explanation of how tribbles learned to stop worrying and love the bomb. Another giggle.

Thish concludes with A Lady's "Turnabout Alternative", in which Kirk is permanently trapped in Janice Lester's body and must come to terms with his new sexuality. It's an obvious story, without any discernable depth, but it is enjoyable and a fair sample of the goods. If you prefer your adult material good-humored and only mildly raunchy, you'll probably enjoy not only KING but the whole GROPE series. As usual, art this time around is well-executed but sparse. Recommended. [2]