The Bedside Grope and Queen Grope

From Fanlore
(Redirected from Bedside Grope and Queen Grope)
Jump to: navigation, search 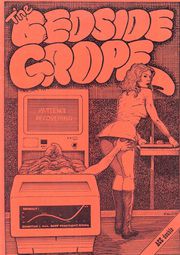 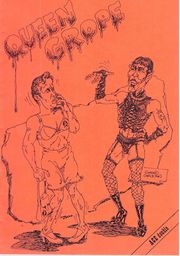 flipped over, the cover of "Queen Grope" -- Gordon Carleton 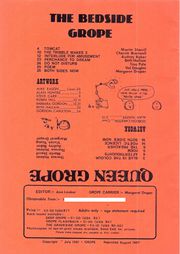 The Bedside Grope/Queen Grope is a 42-page explicit het Star Trek: TOS double-issue zine published in England. It was edited by Ann Looker. Printed on 11x17 paper and folded, center stapled. It is a flip-over zine.

This zine is part of the "Grope" series.

Contributions of stories or artwork appreciated BUT 1) I like a piece of writing to be a story with a PLOT rather than simply a turn-on 2) Some of the sexiest stories I have read are some of the least explicit. I prefer them that way. Same goes for artwork. As suggestive as you like but my printer suffers from heart trouble, and I don't want to give him a heart attack. [1]

GROPE LIVES; The new issue of Grope will definitely materialise some time next year. It has been 2 years since the last issue, KING GROPE, and many new writers have appeared on the scene since then. I am sure there must be plenty of STAG members who have stories that are too naughty for LOG ENTRIES. If so send them to me and I'll consider them for GROPE. For those newcomers to the GROPE scene - GROPE has a reputation for printing stories with actual plots. I don't like six page blow-by-blow accounts of sexual get-togethers. It must be an actual story containing implicit or explicit scenes of turgid sex or having some other feature that makes it GROPISH rather than LOG ENTRYISH or ALNITAHISH. Regular readers know what I mean! Humorous stories are very welcome also. Another point: some of the sexiest stories I have read have also been some of the most restrained. There is no need to go over the top in explicit sexual descriptions (unless you really want to!). All fans have marvellous imaginations and are perfectly capable of filling in those parts that an author may be too reticent (or have too much good taste) to describe explicitly.) In other words I am looking for dirty stories in fairly good taste! So, if you want to see another GROPE, start digging out those hidden stories or get sharpening your pencils,.., probable title for the next issue:-THE BEDSIDE GROPE. Material to me as quickly as possible so I can get the accepted stories illustrated. [2]

In 1994, Ann Looker was looking for a good home for copies of this zine:

Interested in a free bedside Grope? In the 70s and early 80s the  GROPE series was probably the best known adult Trekzine in the UK.  A mixture of sex and humour, it even got its editor a free trip to  the States, courtesy of the Star Trek Fan Fund, voted for by  American readers. I haven't advertised GROPE for 10 years and the  remaining copies are languishing in a cupboard. If you would like to save them from the local recycling plant then send postage only  (75p in UK stamps) to Ann Looker... A minority of stories are K/S and an age statement is required  when ordering. A few copies of other issues are also available at  70s prices. Send SAE for details. [3]

All are long out of print and difficult to obtain. I sincerely hope that #8 won't be the last, since I quite enjoy the sly humor and artwork, and the offbeat but mature writing. You won't find any too serious/dramatic, overwritten, overly sentimental, sophomoric tear-jerkers here. The editor herself said, in the "Editor's Postscript" to SON OF GROPE: "...the zine as a whole is not meant to be taken seriously, though certain individual stories may bring a tear to the eye, a lump to the throat, a wrench to the gut, or up yesterday's dinner! GROPE began as a light-hearted romp and, I hope, will continue in that spirit. The stories and poems...do not necessarily reflect the views of the editor nor are they intended to present a workable Star Trek universe—not even I think that the big E can function with its First Officer permanently on heat!" Some American readers may find some of the British writing hard to get used to. It should be noted, too, that the majority of stories are not K/S. In this case, the ability to appreciate Infinite Diversity certainly pays off! [4]

Reduced offset in that odd 8 x 12 sized paper our Brit cousins use. Has a wrap-around heavy cover, with a really nasty Gordon Carleton cartoon on QG (picturing K and S as ugly transvestites ; luckily the likenesses are so poor you hardly know them) and a Mike Eason illo on the other side.

Features the usual whimsical writers of Ann's stable, including Audrey Baker, Beth Holmes, Martin Sherrif, Cherrie Bramwell, Tina Pole and Val Douglas. All the material in this zine series is satire or broad humor, and usually most enjoyable with their peculiar English slant. Sherrif's "Tomcat", wherein Kirk loses the title to his F.O. after himself being kept as a housepet by an alien species, has a deft touch, while keeping the characters firmly in their recognizable roles. The two Audrey Bakers, "Interlude for Amusement" and "The Preacher" are up to their usual standards. The latter concerns the machinations. of a hell-and-brim-stone cleric who uses his talents to inflame the crew of the U.S.S. Copernicus against their temporary top officers— Kirk and Spock — and their "Unnatural relationship". "Interlude" continues the long tradition of bumbling Marysues with caps set for Mr. Spock—with Priscilla Ramsbottom achieving more success than most. All in all a fun zine, strictly for laughs, well worth its modest cost. [5]