Are you looking for the DC Comic character Barbara Gordon?

Barbara Gordon was the same person as Helena Seabright, the editor of the influential, and controversial, zine Alien Brothers.

Gordon also proposed at least two zines that did not see publication: "The Next Generation" and a second issue of "Alien Brothers." 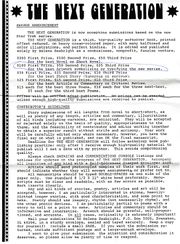 An early submission request for the proposed zine, "The Next Generation." An excerpt: "Story submissions of all lengths from novel to short-short, as well as poetry of any length, articles and commentary, illustrations of all kinds including cartoons, are solicited. They will be accepted or rejected solely on the basis of quality, appropriateness to the theme, and the feasibility of contributor and editor working together to obtain a superior result without strife and acrimony. Your work will be carefully edited only where necessary, however, you have the final say on what is published, and can OK the final manuscript. Deadline for THE NEXT GENERATION will follow anthology book publishing practice: only after I receive enough high-quality material to publish will I set a date with my printer. This avoids compromising quality."

Gordon passed away in January 2018. Her massive fan art and fanzine collection ended up being sold in Chicago area estate sales. One man, Jenson Hillenbrand, rescued 72 pieces of fan art from her collection and tried unsuccessfully to donate them to various LGBTQ groups in the Chicago Area. He eventually put them into a monthlong art exhibit [1] and offered them for sale in 2020. [2]

Involved in Many Controversies

Gordon was a flashpoint figure in fandom due to her intense dislike of Harve Bennett and his Star Trek film production, her persistent and raging letters to Interstat regarding other fans and fandom, her allegations that it was her stolen mail that was the reason she had not paid some fannish bills, her twisty communications in Kindred Spirits where she often insulted fans and fandom, her suggestions that there was an anti-Barbara cabal in fandom, her statements that fans were intensely cliquish, that certain fan editors had been unfair and careless with her art, that fans were often ignorant about art, and much more.

Gordon also claimed to have brought some of her complaints about other fans to a lawyer.

Gordon was almost certainly the creator of Naked Doubles, an anonymous open letter in the form of a flyer that enraged many fans.

It appears that Interstat either stopped printing Gordon's letters in 1984, or that Gordon gave up trying to get them printed. [3] [4]

In June 1985, Gordon wrote: "I am becoming convinced that it doesn't matter what or how I say something? It will always be misunderstood in fandom. That is one of the reasons why I stopped writing for INTERSTAT, and why I don't even try to communicate with some fans. And I am not the only one who has this problem; I know of at least two others." [5]

In April 1986, Gordon gives a different reason for her absence. This was the last letter printed in that letterzine.

Gordon's letters to K/S & K.S. (Kindred Spirits) were very combative, angry, and accusatory. The topics were similar to those in Interstat: persecution, cabals, misrepresentation, refusal of zine editors to print the controversial Loveslaves, accusations of vicious personal letters sent to her, and much more.

Fans' reactions to these letters were sometimes pointed and aggressive, sometimes bewildered, and occasionally supportive. Many fans simply ignored her and pointedly did not address her tribs. Fans in that zine grappled with how to handle Gordon.[6]

There were at least two major dust-ups in that zine.

One of them was a very angry open letter by the central mailer asking Gordon to resign, saying that she'd continue to include Gordon's tribs but she didn't want anything to do with her. [7]

Another one was a very crude single page "flyer," clearly written in anger by two fans who'd reached the end of their rope. [8] The flyer begins with "[BPG], show this to the postal inspector!!" It ranted against Gordon, taking her to task for Naked Doubles, for threatening fans with legal action, for her perceived paranoia and disingenuous threats, and more. One complaint was that Gordon was someone "who rats to the PO about our private world of fandom..."

Gordon's intense dislike of Harve Bennett and his Star Trek productions were evident in her MANY letters and comments to not only Interstat, but also to many other publications. These comments caused Bennett himself to address them in 1983. See this letter, printed in Interstat #72.

Gordon was almost certainly the author of the controversial open letter that was distributed to fans anonymously at Shore Leave #6 in July 1984. See Naked Doubles.

There was MUCH controversy regarding the content and characterization in the story Loveslaves, a story that was turned down by at least two zine editors. Gordon ended up printing this story in her own zine (also controversial!), Alien Brothers.

Gordon feuded with many zine editors regarding their acceptance and treatment of her artwork. [9]

Gordon also had a long-running feud with the editor of Duet regarding the content of her stories Love Slave's Song and Loveslaves. This feud spilled over to the editors of Final Frontier after that zine agreed to print the second story, and then declined.

In late 1985, Gordon reported that her mail was being stolen, and among other things, this meant that some fans were not receiving checks she owed them. [10] Fans who complained of non-payment were threatened with legal action. [11]

Gordon mentioned several times that she had contacted lawyers to take legal action against other fans for their treatment of her. [12] [13] [14]

Some Art by Barbara Gordon