Sahndara is a gen Star Trek: TOS anthology. It was first proposed in 1981 in Universal Translator #10 as planned for late 1981. 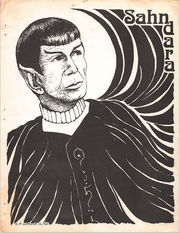 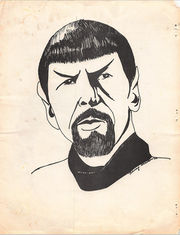 A description from an ad: "Kirk faces self-doubt after the Vejue incident. Aliens bring hope for new life to Zarabeth. Will Cadet Kirk's unusual solution to the Kobayashi Maru cost him his career?"

[from the editorial]: Well, it's almost midnight, I've been working most of the day putting the final touches on SAHNDARA, but the highlight of my evening (the 10:30 airing of yet another beloved Star Trek episode) has given me the energy to tackle my editorial, I've been giving this space a lot of thought, but

I really haven't come up with much to say. Maybe next time I'll give you all my opinions on some profound question of life, or fandom at least, but this time I think I'll just keep it short and take care of some business.

First of all, I'd like to tell everyone that putting SAHNDARA together has been one of the most enjoyable experiences of my life, I've learned a lot, worked hard, and made some wonderful new friends. Experimenting with layout and lettering has been so much fun, too! (I'm addicted to rub-on letters!) The result of all this, the fanzine you now have in your hands, must now be judged by you, the reader, I hope you'll like it, but that's for you to decide. Either way, let me know what you think, I'm in this to stay, and I want to improve my editing skills so I can produce better works in the future. Also, I'm sure my contributors desire feedback, too, so write to them! I'll forward any mail directed to them on, so let them know what you think!

I think we have something for everyone here. There are stories encompassing various eras of Trek—series, post-TMP, and even elements of TWOK, ( While we're on the subject of timelines, the authors of "The Crisis" and I would like it known that this story was written, submitted, and accepted be fore the release of TWOK, although some of the problems may seem reminscent [sic] of that film). We have poetry, gorgeous artwork (at least I think so!), and a delightfully intricate trivia quiz.

As I said, let us know what you think, I even promise to respond to all Letters of Comment sent to me (I'll even be civil to critics!) Seriously, I want constructive criticism, good or bad, because I'll be inflicting another one of these things on the public soon, so if I'm having problems, I want to get them cleared up!

Like most first efforts, this little zine has an uneven mixture of rough, mediocre stories with other, more successful talent. Visually, the zine is quite good, with comfortably wide margins, fine reproduction and artwork, though with a few typos. The writing throughout is remarkably crisp and clear and could easily evolve into something very skillful. THE CRISIS by Suzanne Hinr and Teresa Conaway, written before TWOK, presents us with Kirk worrying about his age after the death of his brother. The characterizations of Kirk and Spock are excellent, with some lines of dialogue uncannily reproducing Kirk's meter and tone of speech. Unfortunately, the story deteriorates into a very long, drawn-out scene wherein Spock comforts Kirk and talks too much. Barbara Gordon' s illos for this, though a bit stiff, are well composed and proportioned.

WINGS TO THE STARS by Lori Paige is my favorite offering in the zine, involving an original intriguing group of aliens who rescue Zarabeth from her exile. This a truly uplifing Zarabeth story with an ending that any romantic will love. Paige skillfully avoids crossing the line separating sentiment from sentimentality. Christine Myers' illos for this are darkly attractive, although her Spock is too exaggerated, and a bit ugly.

THE BRIGADIER by the same team that wrote THE CRISIS takes place at Starfleet Academy while Kirk is a teenage cadet. I think this depicton of the Academy is too military, altho with the advent of the films and their extremely militaristic presentation of the Fleet, I can see how Academy might deteriorate later into this overly hierarchical, authoritarian school.

THREE WOMEN -- THE LOVES OF A STARSHIP CAPTAIN is an art and poetry show case of Kirk' s three great loves; Edith, Miramanee and Reena. Christine Myers does the art, and while her strokes are large, full and strong, only Edith resembles the character's actual face. Sharron Crowson does the poetry. They are sensitive interpretations, tho with little impact.

THE GREATEST GIFT by Toni Trapp is a poignant story about a lovely exile called Krystal encountered by the Enterprise. Stranded on a planet, with her cat as her only companion, she is rescued by Kirk and co and predictably, like so many of these lovely female fan characters, is the object of everyone's awe and devotion. One of the things she has occupied herself with while an exile is reading about history and religion and through that, converts to Christianity. One wonders why, in a galaxy full of religions, she chose Christianity to convert to. The reason given is its promulgation of God as one's friend, yet I know of many Earth religions that promulgate that very same concept, and in a much more consistent manner than Christianity. There are other problems. Krystal has blood cancer and when McCoy discovers this, relieved that it's something so simply curable and so laughs hysterically. Then there's McCoy's cure. Because Krystal has copper-based blood, the usual human cure is inappropriate so McCoy tells Spock "All we have to do is fix some of your blood with the drug and pump it into Krystal." Huh?? Besides that being an unconvincing solution, what if Spock's blood doesn't match Krystal's? "Mary Bohdanowicz' ilIos to this story exhibit her lovely free, smooth, soft style, altho she doesn't quite illustrate any scenes.

The zine is fairly priced and the editor should keep at it. In time, SAHNDARA will no doubt improve if this first issue is any example of the level of talent and ideas that are evolving. [1] 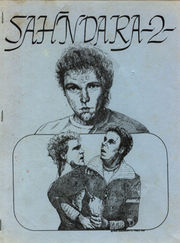 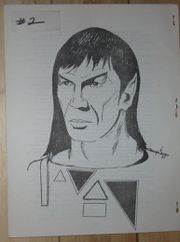 back cover of issue #2, Nancy Gervais

"Did Kirk attempt suicide or did someone try to murder him? Spock returns to Vulcan to face family tragedy and a dark secret from his own past."