You may be looking for the Star Trek: TOS novel Continuum.

Trek Continuum is a gen Star Trek: TOS anthology that started with a very large, oversize issue, and then went on to have three 8 1/5" by 11" issues, the middle two published at the same time.

From Datazine #2: "This genzine contains many aspects of the Trek universe, but no K/S."

From the editorial in issue #3 asking for submissions for the next issue (that didn't happen): "Ling, Short. Novella. Novels. All types, except for K/S in bed together. Nae, I draw the line there."

Trek Continuum 1 was published in May 1980 and contains 90 pages. It is a very tall and wide zine, an odd size. It was printed reduced offset. 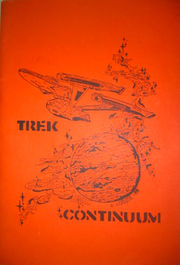 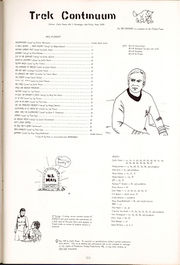 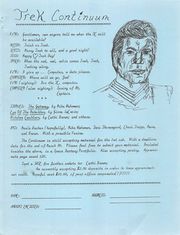 It is a shame that Cathi Brown had to charge $10.00 ($12.90 with first class postage) for Trek Continuum. That is a bit much to ask anyone to pay for a first effort. Fortunately, I got a complimentary copy by virtue of my Joanna-meets-Sarek story therein. "An Unequal Match" has not only given me hours of pleasurable fantasy, but netted me a $10.00 zine as well. Hope others appreciate that story as much as I do. My own personal favorite is Simone Mason's alternate- universe story entitled "Of Darkness and Light" [also published later as a standalone novel]. Are you ready for Klingons and Vulcans as allies? i also liked "Eye of the Beholder" by Ginna LaCroix and "To Keep Thy Brother's Child" by Mary Ann Drach. I believe "Witch's Cauldron" by Cathi Brown could have benefited from some objective editing. A bionic heroine who fights, sings, fixes communicators, babysits, and generally is all things to all people is hard to swallow. Or was it a satire which caught me with my put-on detector down? The only one of the thirteen poems which sticks in my memory is a chilling little piece by Liz Persic entitled "Victims". In it, she writes of Sulu's thoughts during the episode "The Deadly Years." How awful to imagine those dark, vindictive thoughts are churning behind Sulu's grin! The fantasy art portfolio in the center of the zine was perhaps its most unusual feature. It caused the zine to be stretched into a large, flat format which also undoubtedly helped boost the price. vou may find it worth it. There is a wide range of styles and topics from both science fiction and fantasy. Three examples are: a nude riding a dragon; three Vikings who happen to look like Kirk, Spock, and McCoy; and a spacescape with a tiny Enterprise. [1]

This issue was printed in two parts, likely because of size concerns and the stapler! 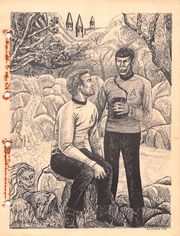 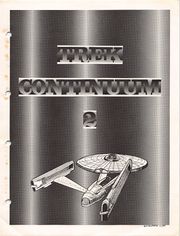 title page of issue #2, v.1, B.P. Gordon, "Now, I want to explain about the cover. I shall admit that the title page looks more like a cover than the cover does. (So did Barbara), but it was a special illustration I had her work up. It's for a story contest… And what better place to put a story contest illo than on the front cover, where all will see...? [2] 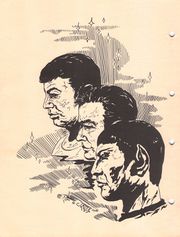 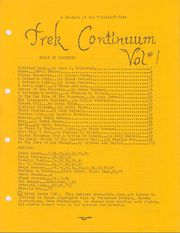 Trek Continuum 1 was published in December 1980 and contains 103 pages. It is mimeo with offset art. 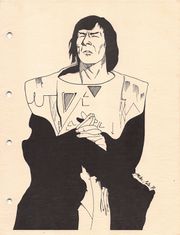 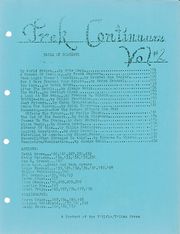 Trek Continuum 2 pt.2 was published in December 1980 and contains about 128 pages. It is mimeo with offset art.

The front cover is a variation of the art used for Naked Times #5. Note: the pagination starts at 104, right after the contents of issue #1 v.1.

It isn't too uncommon for a first zine to have a number of rough spots and errors in editorial judgement; experience and education usually makes the second zine a vast improvement. That did not happen here. Imagine, if you will, a color-blind man asked to sort a mixture of red and green bulbs into separate boxes. Having no perceptual understanding of the different colors, he would be reduced to relaying on random chance to help him complete his task. The editor of TC2 has apparently used the same criteria to fill the pages of her zine, so this is an offering a mixture of extremely poor to fairly good items. Unfortunately, it isn't a 50/50 mix, but leans heavily towards the former. The names of several talented fan artists in the contributor's list will probably attract the average potential buyer. Sadly, some of the best pieces were printed unreduced, clipping off the tops. A great deal of poor filler art by the editor should not have been included. Tigriffin would like to hear justification for printing things like a black blob splotched with smaller white blobs, which could not even be identified where it not for clues in the story. Other costly, unsightly production errors included the two volume format (doubled cover stock cost and double numbers of binders, one pair of which would have easily held the 200+ pages); lack of adequate margins which obliterates whole words near the center; sometimes illegible mimeograph work; a general tendency to waste space and material which automatically raises the mailing cost. There are blank pages, pages clearly marked 'delete,' and zine ads confusingly placed within the borders of a story. The staggering number of errors in spelling, grammar, punctuation, and proofing alone indicate at the very least a careless attitude towards editing. The written offerings include two interminably long stories which smother the good lines therein, a cutesy animals-who-are-surprise!-intelligent tale, one of the most blatant Mary Sues to appear in recent memory, a hurt/comfort story awash with soapy melodrama, a cartoon feature with mediocre art, and a ho-hum story-line, two totally pointless short pieces, a logically impossible action/adventure story, two precocious-kids-on-the-Enterprise stories, and a humorous shot that comes within an inch of working, but fails. It, and the two long tales mentioned, could have bee quite good with objective, knowledgeable editorial advice. There was also quite a bit of wretched poetry, with the exceptions being the ones by Hansen, Jackson and Galli. Unfortunately, these poems and several fine illos do not even come close to justifying the zine's price. [3]

[a review that covers this issue and the preceding one]: A two-volume zine this time, TREK CONTINUUM 2 is a plethora of story, poetry, art (including that of our own Vel Jaeger), calligraphy and a full-length cartoon. The zine is dedicated to the late John Lennon, with a Jaeger illo featured prominently at the beginning. The covers are beautiful, in my opinion, promising good things between. Following the editorial, two thoughtful poems introduce Volume 1, moving into a story by Simone Mason (reprinted from CAPTAIN'S LOG, an English zine edited by Sylvia Billings) entitled "Feline Encounter". It is a cat story, charmingly illustrated and well written, and one which will be appreciated by cat lovers. The Enterprise crew becomes enamored with the "beasties" and almost overwhelmed with them!) until a logical solution is conceived. "Secret of the Mountain", a story enveloping time travel, life after death, and Spock's encounter with an unusual Vulcan from the past stacks up as an absorbing trip into a strange world with Kirk and McCoy at his heels. It introduces a new possibility in Vulcan's past which some readers may find very interesting. Cathi Brown's "Untitled Dilemma entails the misadventures of Samantha MacShannon aboard the Enterprise — an amusing Mary Sue story that unfortunately leaves us dangling helplessly with "to be continued...". How many more levels will she manage to blow up in the next chapter? "Gordian Knot", a hurt-comfort adventure is filled with Kirk's grief at Spock's imaginative demise. The reasons for his death are not unique, but interesting, nevertheless, and his captain's search for and recovery of him follows predictable lines. (I sometimes feel that all that green blood must be less alarming to humans since we are so conditioned to red!) Rayelle Roe's humor shows in her slightly wicked "The Small Matter of the Captain's Back", a subject dear to my own back ... er...heart... and Kathy Carlson's illo tops it off suitably!
The quality of Volume 2 does not measure up to Volume 1, but I regarded it merely as a bonus. There are more typos in this half and some of the print is difficult to read, but story content is good and most of the poetry is excellent. The poetry in both volumes is, in my opinion, above average, and is thoughtfully embellished with calligraphy and illos that are attractive and pertinent. I will not go into the entire content of the stories In Volume 2, except to mention a few at random. Marilyn Johnsen's "The Gift" is a short story of friendship, the kind that only happens rarely, and then only between true friends, "Fireflies of Azande", by Simone Mason, features Amanda and Sarek kidnapped by Tellerites following the conference on Babel. Of course, the Enterprise takes off in hot pursuit — only to find the maverick vessel crash-landed on an unknown world. The epic meanders a bit, but provides a change of pace for our daring rescuers. The outcome is reminiscent of Jean Lorrah's universe, complete with happy ending, and permits an hour or so of fascinating reading. (It was reprinted from ORBIT 303.) I would select "For I Have Touched Your Spirit", by Nadya Emanuel, to be my first choice among the many stories: Spock goes back through the Guardian and falls in love. A painful revelation concludes this poignant story with the impact of a photon torpedo! A must for Spock fans! Zine ads flit about here and there throughout Volume I, and TREKisM and KIRK are among them. The cartoon is a bit of fluff which most readers may get a chuckle or two from, even though the artwork is not of the best quality. While the stories in both volumes were not earth shaking or completely unique, there was enough variety of subject to make this zine appealing to almost any reader. There were errors (even a mispelling in one of the titles), but most zines do have errors no matter how carefully they are proofed. Since this was Cathi's second effort at putting out a fanzine, it is clear to me that she earnestly tried to please her readers. The length and content is quite different from TREK CONTINUUM 1, which leads this reviewer to believe the improvements fortell bigger and better issues to come. [4] 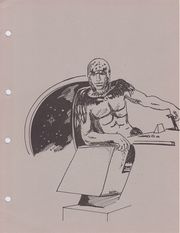 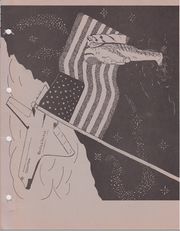 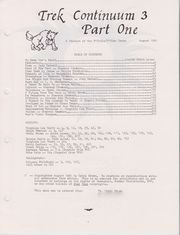 From the editorial: "No doubt most of you are wonderin' about th' PART ONE bit.... As I said on the flyer -- least I hope I said on the flyer -- for this... uummm... thing, I gathered this 'Bribdingnagian' (vast) amount of material for #3. And instead of confusing the issue schedule, I decided ta put 3 out in parts. Thusly, cutting the post office's share of the profits. (They get rich -- we go broke!)... Also, ya may hae noticed th' covers are'na exactly 'trek.' Well... I was over-whelmed by Columbia's successful mission. And I like Hawk!"

The Fourth Issue that Became a Somewhat Different Zine

This zine was proposed in Universal Translator #10. It was to be a full-length novel called "Of Crystal Persuasion" by Sharron Crowson. In it, McCoy picks up a small stone on an Eden of a planet and things are never quite the same again. Art was to be by Crouch, Jackson, and "new-comer" Don Lewis. In 1983, this zine became Of Crystal Persuasion.