Are you looking for the Nourishment Smallville series by jfc? 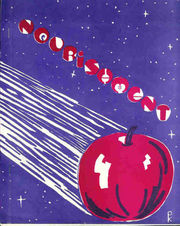 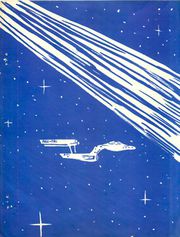 back cover by Pete Kaup

Nourishment is a gen 81-page Star Trek: TOS anthology of poetry, art, filks, and recipes. Its theme is "Food for Mind, Body and Soul." The cover is by Pete Kaup. Many other artists contributed interior art including Pat Stall, Andrew Williams, Kathy Carlson, Perrie Walter, Amy Falkowitz, and Carole Johnson

There were 300 copies in the original print run.

Four of the poems are reprinted in Starborne.

Promoted as 'food for mind, body, and soul,' this is indeed an appetizing zine because of its immediate visual appeal. The first thing I scrutinize when a new zine arrives is the artwork, and seldom is there enough to suit me! However, because this zine is devoted entirely to poetry, art work, music, and recipes (there are not stories), art abounds. Happily, because 'Nourishment' is a new zine, teh editors were willing to give new artists an opportunity to showcase their work, and the the reader is thereby treated to some outstanding illos by Andrew Williams, Kathy Carlson, and Carole Johnson and several delightful clever border designs by Perrie Walter, in addition to the exceptional fantasies of established Trek artist, Amy Falkowitz. Another special treat is provided in the form of words by [April Valentine] and music by Kathy Burns of for of their original Trek filk songs from the soon-to-be-released album and songbook, The Colors of Love, performed by Omicron Ceti Three which I have been privileged to hear at various mini cons this past year. [April Valentine], of course, already known to Trekfen because of her relationship stories and poetry in Contact and in Galactic Discourse. She is also one of the featured poets in this ish and is in good company, as she is surrounded by other well-known poets... In typical futuristic affirmation, the recipes are presented in Metric weights which confuses me completely, but in equal compassion for the likes of me, the editors have provided a conversion table at the back of the zine. At any rate, I have enjoyed many of the resultant delicacies at local mini cons and can, at least, vouch for the deliciousness of the products, if not the mathematical computations to produce them! This zine ends with the promise of a second issue, and I can only add my second to that hope. For a first effort, 'Nourishment' is remarkably filling. [1]

Artwork varies from fair to excellent (students of Pat Stall are featured here). I haven't used/tried any of the recipes (being a lazy cook) but several of them sound very good. ('Flying Parasite'? How about a 'Finagle's Folly'?) 'Cheese Hortas' with a delightful drawing by Pat Stall. And of course we have a recipe for plommek soup. (I think I've seen at least three now.) Poetry ranges from fair to excellent; I will not really review too many in particular; poetry is one of those things that everyone has different feelings for. Juanita Salicrup has a set of four lovely haiku. 'A Time to Remember' is a lovely evocative piece by [April Valentine]; I have to comment on something that happened oddly in this zine -- I submitted an illo for interpretation, and as it turned out, Pete and [April] both did poems, separately, that fit together beautifully as a contrasting pair. Sometimes luck just happens -- I enjoyed both of their views. 'Nourishment' is what I would call a 'light zine. [2]