You may be looking for the Canadian club zine Shuttle Butt or the Scully/Skinner fiction archive Scuttlebutts. 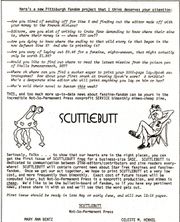 Scuttlebutt is a Star Trek: TOS reviewzine edited and published by Mary Ann Bentz and Celeste Henkel. It is dedicated to Star Trek fandom and is primarily a listing of fanzines (mostly Trek, but other fandoms as well) that were about to go to print, fanzines that were available, and reviews of fanzines. Upcoming conventions were listed and a list of subscriber birthdays to celebrate.

There was also a small amount of discussion of the building trend in ST fandom of K/S, and one issue has one of the earliest uses of the term. [1]

There are sixteen issues, each running about 17 pages, letter-sized. They were mimeographed during the first year and then went to offset. The copy printed count varied from 300 to 330.

The editors write that the project "started in Connie Faddis' living room." This first issue was handed out as a freebie at SekWester*Con Too.

From an announcement in The Halkan Council #25: "Scuttlebutt is a new zine with 'up-to-date news about fanzine fandom.' Hope to print at a very low cost, more frequently than every two months. Mimeo. First issue available for a business size SASE... In association with Connie Faddis and Nancy Hillman."

A fan wrote: "Scuttlebutt was not only needed in the ST community, but it was a solid, steady product -- no small feat in our amateur realm." (from a fan in issue #16)

Are you tired of sending off for Zine X and finding out the editor made off with your money to the French Riviera? -- Editors, are you sick of writing to irate fans demanding to know where their zine is, where their money is, where YOU are? -- Are you dying to know where the ending to that wild story is that began in the now defunct Zine Z? And who is printing it? -- Are you wary of laying out $8.46 for a fanzine, sight-unseen, that might actually only be worth $1.98. -- Would you like to find out where to read the latest missive from the poison pen of Stella Bumacarczech, BNF? -- Where oh where can you find a sucker eager to print your 2000-page lay-Spock extravaganza? -- How about your first crack at tracing Spock's ears? A tribble? -- Who's a desperate zine-editor who will print anything you lay on him or her? -- Who's sold their novel to Bantam this week?

THIS, and too much more up-to-date news about fanzine-fandom can be yours in the incredible Not-So-Permanent Press nonprofit SERVICE bimonthly mimeo zine.

Seriously, folks... to show that our hearts are in the right places, you can get the first issue of SCUTTLEBUTT free for a business-sized SASE. SCUTTLEBUTT is dedicated to communication between zine-editors/contributors and zine readers everywhere! SCUTTLEBUTT will contain current news about Star Trek fanzines and fanzine fandom. Once we get our act together, we hope to print SCUTTLEBUTT at a very low cost, and more frequently than bimonthly. Exact cost of future issues will be computed later, but Not-So-Permanent Press is a nonprofit production, and mimeo is cheap. We'd like to be the bulletin board of fandom, so if you have pertinent news, please share it with us, and we'll see that the word gets out. -- Mary Ann Bentz & Celeste M. Henkel (co-editors), Connie Faddis (Keeper of "Sal Mimeo") and Nancy Hillman ("Head Crank") [2]

From Mimeo to Offset

On the zine's one year anniversary, the production went from mimeo to offset:

Happy Anniversary to us! This month 'Scuttlebutt' is one year old. If you will remember, we came up with this glorious gazette for SeKwester*Con, Too. You may have notices that we have gone to off-set printing... thatz our anniversary gift to us. No more hassling with the %##&@!(#%#(@(&! mother lovin' mimeo! No more inky fingers afterward! No more lost sleep from corflu/lacquer-thinner headaches for a week! No more going blind from trying to proof-read stencils! YYYYEEEAAA!!!!

From the Editorial of Issue 1

Scuttlebutt is about STAR TREK fandom, mostly fanzines, but fandom none the less. We want to be the bulletin board of TREK. We want fans to know when Zine X is coming out, if it will be late and why, how much it will cost and where you can get it. We want to let people know what other fans think of certain zines, what conventions are coming up, who's (sic) birthday is coming up, what other fans are interested in and up to. We don't plan to print letters of comment but any & all suggestions will be accepted. We want to offer what fandom wants. We will accept reviews, guest editorials, and personal statements. We ask that all submissions be 150-200 word, tops! All reviews must be on current, available fanzines and must contain title, price, address and type of print (offset, mimeo, etc.) Please be fair and don't use the review as a 'soap box.' Please don't give away story endings. And please, be honest; if you think something stinks, say so... Special thanks to Connie Faddis for technical advice, time, equipment, and the brain storm for this creature in the first place, 'Muchisimas Graciias' to Nancy Hillman for inky fingers, strong arms, and all the know-how she gave us. And a special thank you, too, to Gordon Carleton for our stupendous logo!!!

The editors announced in issue #13 that they would end the zine at the end of the year with issue #16. They wrote: "Anyone wishing to do an information zine with a format similar to our is welcome to do so, but we could appreciate the courtesy of allowing us to retire our zine intact."

In the last issue's editorial, the editors noted that three zines were going to step up and fill their space. One was Forum and another was Universal Translator. It is unclear what the third zine was.

Scuttlebutt is great! It’s a mimeo newszine that has the most extensive zine listings around and the most recent fan news. This is a service that fandom really needs – thank you… The zine listings are divided up into section: currently available zines, proposed zines, zines about to go to press, and old issue of zines still available. Scuttlebutt also has a few less detailed con listings, general fannish news, reviews of new zines and birthday listings – a cute, personal touch that reminds me of a company newsletter. The mimeo reproduction is clear and readable with few fade-outs. The only artwork is the logo by Gordon Carleton. As a zine buyer’s guide, Scuttlebutt is of great help to any fan, whether neo or old timer. It is a wonderful idea that has gotten off to a good start. [3]

This is an ambitious new zine that is attempting to provide a service to other fans through a variety of features. Interestingly enough, nothing inside the zine is new. There is a list of upcoming cons, much like APOTA's section of birthdays like Star-Borne used to carry, some personal notes and public notices similar to the POF section inside Halkan Council, a few zine reviews by various people and an extensive list of available zines. Scuttlebutt hopes to provide useful information to mainly the fanzine fans in fandom. Their intent is to list available, almost-in-print, and planned--for-the-future zines on a regular basis, with the other features thrown in as extras. If it works it will be the zine to buy to find out what the new zines are that are coming out... also the zine to inform if you happen to have such a new zine. I predict that Scuttlebutt will have it's work cut out for the first six months of publication (the hardest period for any fanzine). Scuttlebutt will need to get a lot of publicity before if can really become a service, since a lot of zineds won't even know Scuttlebutt exists until the name gets passed around a bit. Also it is notoriously hard to make a totally non-fiction zine survive. A zine that appeals mainly to mainstream fandom has a limited audience to begin, a few hundred at most, so Scuttlebutt will have difficulties making the rounds at first. If you like the idea of the zine, please give it your support. As far as the first issue goes ... there could be improvements. The mimeo is spotty in places and the italic typestyle gets to be a bit much on the eyes page after page. Also, 63¢ is a bit much, for a zine this size in mimeo. Halkan Council is only 50¢ and it's offset, so it would seem that if Scuttlebutt really wants to be a service, it could be made more affordable. Give it a try though, it does show great potential. [4] 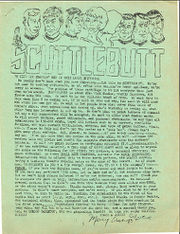 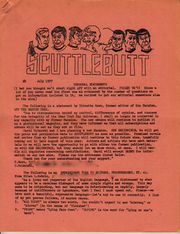 Scuttlebutt 3 was published in September 1977 and contains 22 pages. The art is by Gordon Carleton (logo), William Bow, and Lynn Robinson. 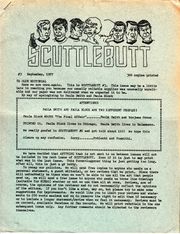 Scuttlebutt 4 was published in December 1977 and contains 16 pages. 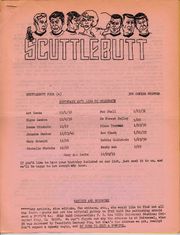 Scuttlebutt 5 was published in Jan/Feb 1978 and contains 16 pages. 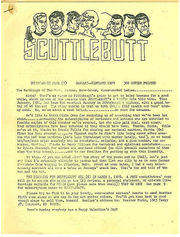 Scuttlebutt 6 was published in April/May 1978 and contains 14 pages. The editors write: "We don't know how long this insanity [issuing this zine] will last, so PLEASE DO NOT ORDER PAST ISSUE TEN." 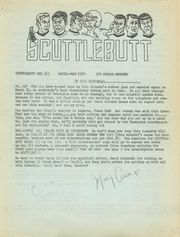 Scuttlebutt 7 was published in June 1978 and contains 14 pages. 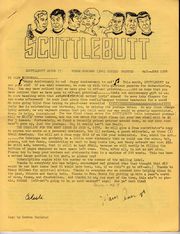 Scuttlebutt 8 was published in July 1978 and contains 14 pages. 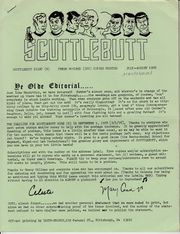 Scuttlebutt 9 was published in September/October 1978 and contains 18 pages. 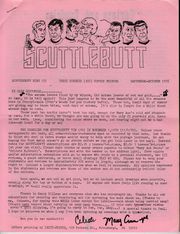 Scuttlebutt 10 was published in November/December 1978 and contains 18 pages. 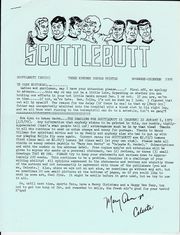 Scuttlebutt 11 was published in January/February 1979 and contains 20 pages. 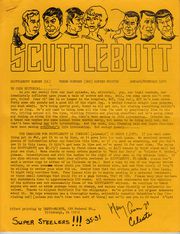 Scuttlebutt 12 was published in March/April 1979 and contains 20 pages. 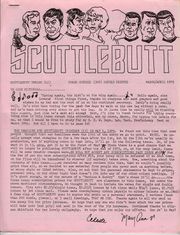 Scuttlebutt 13 was published in May/June 1979 and contains 15 pages. 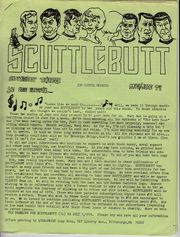 Scuttlebutt 14 was published in July/August 1979 and contains 20 pages. 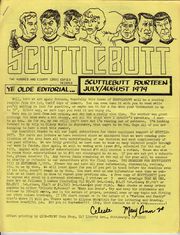 Scuttlebutt 15 was published in September/October 1979 and contains 20 pages. 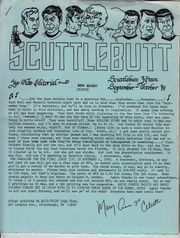 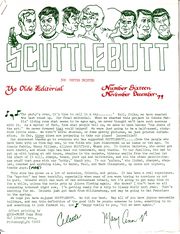