A round robin is a chain of letters sent among a small number of fans. Some round robins were used for discussion of ideas and non-fiction topics, a sort of an apazine. Other round robins were type of fanfiction challenge and used to create a story written by more than one fan.

The term has existed in fandom since at least 1944, when Fancyclopedia I defined it as

A story each installment of which is by a different author. There were round robins by pros in the old Fantasy Magazine ... Speer had plugged for round robins of fan fiction, but the two that got underway died of boredom after a while.[1] 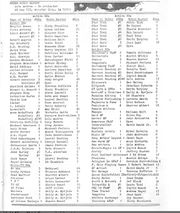 A fan describes this sort of round robin: "Round robin letters can be fun! Get several people together by mail (five is a good number), who share one or more interests. Have a robin master (RM) who keeps track of members and the progress of the robin (RR). The first person writes a letter, sends it to the next, who adds a letter, and so on. Back around the circle to the first member, the RM. At each turn, you discard your old letter and add a new one. Keep a list of members with the letter packet, and send the packet around in the listed order. The RM's job is to keep track of things -- period, NOT to dictate; and members should respect each other's views..." [2]

In a round robin, participants write a section of a story before passing it onto the next participant, until all participants have taken a turn at writing the story. Sometimes the collaborators have discussed a plot, theme, or desired end result; more often, the round robin is more free-form, with each participant challenged to figure out how to resolve what has been written previously while still leaving room for the next participant. Some round-robins have set word limits (such as a drabble) for each participant. Round robins were common in list-based fandoms such as Highlander and Due South. Sweet Savage Star Trek was made online on Compuserve, prior to the internet boom. The Kraith Round Robin is another example:

The story-robin... This is how I got my real start in story writing (believe it or not!). It is a very strange, but oddly satisfying game. One person writes an opening page or chapter of a story, sets up a 'robin' list such as for a letter-robin, and sends it off. The second person adds a page, or a scene, or chapter, and sends it to the third, and so forth until the last person returns it to the first (3-5 people is ideal) with the original story all bent out of shape. The first person then tries to salvage the mess by whatever means fair or foul, and sends it out again with a new plot twist. I've never seen one of these things come to a satisfactory or definite ENDING -- and I don't recommend it as a training ground for a serious writing student -- but it can reveal a lot about story structure and the importance of character in plot while it is a lot of fun. Its' also a way to participate in story-ing in you're the type who only gets fragmentary ideas or just can't tackle whole story projects. Robin-ing like this just might turn you into a story-finisher... [3]

In 2008, newkidfan organized a Fic and Art Round Robin as one of the Artword community's challenges. Its challenge 014 was "round robin"[4] -- it challenged 17 writers and 15 arists, organized into multiple teams, to come up with a story and accompanying artwork, both round-robined, in a limited amount of time. It generated 15 works of fanfiction and 15 works of fanart in the Stargate Atlantis fandom.[5]

Some fandoms don't have a round robin presence. In other fandoms, they are much more prevalent.