Darkover Newsletter focused on Darkover and other fiction by Marion Zimmer Bradley. Bradley herself was very active in this newsletter and contributed much commentary, many essays, answers to fans' questions, and personal (some very) information.

Issues ranged from 6-46 pages, with most around 20 pages long. They were photocopied on colored paper: white, pink, green, tan, orange, medium blue, yellow, light blue, including two on glaring green, and red. A fan in 1989 wrote: "One comment about legibility... Using different colors of paper is great, but please, no more orange." [2]

As one can tell from the first three issues, the newsletter was, at least in the beginning, very casual regarding its official title.

Early issues provided fans' name, address, and phone numbers, as this was a primary way for fans to find each other. Later issues had only fans' names and general location, something that was a common change for publications of this sort, and most likely due to privacy and increased visibility due to computer networks. It may also have been a cost-saving measure.

The first three issues of "Darkover Newsletter" were retyped and reissued due to fan demand. In #9/10, Bradley wrote: "The first [three] issues when I was doing it all myself with these fumbly fingers and no business brains, are more complicated [to reprint] — either we have to retype them all, or else take apart our file copies and have them printed from second generation xerox copies. Which is a fussy and time-consuming process. However, we will do it — ONCE." Despite Bradley's comment in issue #9/10 that she did the first three issues "all myself," she only edited the first one in that set.

The last newsletter was numbered #70, but there were actually only 68 of them (including six double issues). The staff took a hiatus in 1983, and when it returned, began the count at #31 (which means #29 and #30 were never published).

Most issues were collated at MZB's home in Berkeley by fan volunteers. In 1986, the editor told a fan that the newsletter was "issued by the joint efforts of a small staff living within five blocks of each other in Berkeley." [3] This "small staff" was Friends of Darkover, Thendara Council, and other members of MZB's entrourage.

One of that entourage was Jacqueline Lichtenberg. She was a very constant presence as writer, cheerleader, and organizer in the zine until December 1983, the last issue in the first run before the zine took a 3-year hiatus. When the zine returned in 1987, Lichtenberg is only mentioned once in a comment by Bradley regarding meeting her and Claire Gabriel for a meal.

Correspondence and contact info for this newsletter was P.O. Box 472 in Berkeley for the first two issues. This was Tracy Blackstone of the "Blackstone Literary Agency" business address. The address was changed when the amount of mail became too much for that box to handle.

As of issue #3, the address changed to P.O. Box 72 in Berkeley. This kept Walter Breen busy cutting off the "4" in the address labels for reuse.

The back page of issue #9/10 mistakenly printed P.O. Box 352 as the newsletter's address. This was Bradley's personal P.O. Box; instead of correcting this error in the next newsletter by citing the mistake and giving the correct number, she repeated her personal address, which was either an act of poor self-preservation, or a disingenuous slip.

Bradley also sporadically included her personal P.O. Box number in later issues but did not specify it as such.

'Friends of Darkover' is a nonprofit, nonreligious, non-sexist and nonaggressive organization whose sole purpose is to explore to fantasy-world of Darkover, and similar/overlapping/other fantasy-worlds written about by Marion Zimmer Bradley in the Darkover novels, and other writers of fantasy series novels. We have no dues, no formal rules, and no taboos except those of civilized debate and the limits of good taste. (We are a family magazine. Our youngest reader -- known to us, that is -- is fourteen.) All letters sent to us are subject to printing unless you specifically ask us not to... Letters are edited for length. (And we warn you now that four-letter words will be deleted -- we don't use them ourselves, we dislike them in polite surroundings, unless used very explicitly for their exact meaning -- when used for mere abuse their use denotes a lack of imagination and becomes mere vulgar repetition; also they give grave offense to many readers.) However, any letter which we print will preserve your meaning... we do not censor opinions, even the most uncomplimentary ones. [4]

WELCOME TO THE FRIENDS OF DARKOVER 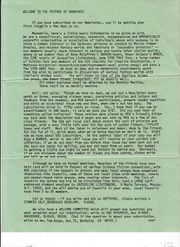 page one of the welcome letter for "Friends of Darkover" members, date is sometime before June 1978 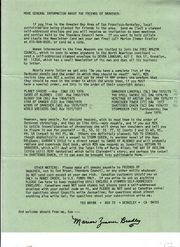 page two of the welcome letter for "Friends of Darkover" members, date is sometime before June 1978

If you have subscribed to our Newsletter, you'll be getting your first issue in a few days or so.

Meanwhile, here's a little basic information to be going on with. We are a nonpolitical, nonreligious, nonsexist, nonaggressive and EMPHATICALLY nonprofit organization or association of individuals whose only purpose is to share a common interest in the Darkover universe as created by Marion Zimmer Bradley, and related fantasy worlds and imaginary or "secondary universes" -- our members usually share interest in various and sundry other similar worlds; among us we number fans of Anne McCaffrey's DRAGON books, Roger Zelazny's AMBER, the SIME novels of Jacqueline Lichtenberg, some STAR TREK fans, a large number of Tolkien fans and members of the SCA (Society for Creative Anachronism, a Medieval-historical research/costume/tournament-revel giving group) and even a few STAR WARS fans. We have no dues and no membership requirements apart from the wish to participate in discussions of various fantasy worlds with similarly minded souls. The well-known by-laws of the Sherlock Holmes fan group, the Baker-Street Irregulars, fit us equally well; All other business shall be deferred to the Monthly Meeting. There shall be no monthly meeting.

Well, not quite. Though we have no dues, we out out a Newsletter every month or three, averaging sixteen pages, containing articles and letters and feedback from the readers, and MZB herself participates, answers reader questions and edits an occasional issue now and then, when she's not too busy. The subscription price is fifty cents an issue. Yes, I know that if you saw an advertisement in DAW books, it said we gave you 4/$l. Did you ever hear of something called inflation? Those notices were placed by MZB's Friendly Editor way back when the Newsletter had 6 pages and was sent by MZB to a few of her close friends. [5] The 50¢ per issue just about covers the cost of printing and postage, with a very little left over for the cost of carbon ribbons, liftoff tapes and stuff. Most of the labor is volunteer and donor, done by the Friends for the fun of it, which means when we're being hassled we don't do it. Right now we have about 500 subscribers. On the address label of your copy you will find a NUMBER, which is the LAST issue you will receive on your current subscription; if we do not hear from you before that issue has been sent out and the next one ready for mailing, you may not hear from us again. Our budget is getting a little too tight to send out letters to remind you. Obviously, if we are mistaken about the number of issues you have coming, please write and tell us we are wrong.

OTHER MATTERS: Please make all checks payable to FRIENDS OF DARKOVER, not to Ted Bryan, Thendara Council, or any other entity whatever. Do NOT send cash except at your own risk. Canadian customers should Day us ONLY in MONEY ORDER, in U.S. FUNDS ONLY. If you write to ask us anything PLEASE (we hate to keep repeating this) ENCLOSE A STAMPED SELF-ADDRESSED ENVELOPE: Canadians need NOT send stamps but please send a self-addressed envelope with your postal code on it, and PLEASE do NOT send us Canadian coins! For questions about Councils write Jacqueline; for questions about almost anything else write Gai; for questions about your subscription write me; TED BRYAN + BOX 72 + BERKELEY + CA 94701 And welcome aboard from me, too — Marion Zimmer Bradley [photocopied signature]

The Editors and Other Creators

There were varying editors, but Ann Sharp was the editor from issue #23 onwards. Elisabeth Waters also had many editorial comments in later issues.

The newsletter was first published by Friends of Darkover.

The change from "MZB Enterprise" to "Marion Zimmer Bradley, Ltd." was made after Bradley's health took more turns for the worse; the change was explained in the December 1989 newsletter.

Letter from MZB was a regular feature in the Darkover Newsletters.

The letters were an opportunity for Bradley to address her fans. They were usually lengthy, chatty essays that were a combination of personal goings-on and promotions of her books and fandom. They functioned then as today's blog posts by professional writers.

Bradley addressed fans and had frequent comments in nearly everyone of the 68 newsletters, but "A Letter from MZB" was a formal feature.

At the height of its popularity, the newsletter had about 1000 subscribers. In the later years, that number dropped to 100 or less.

During the summer of 1988, most of the "staff" of the newsletter became involved in MZB's new project, Marion Zimmer Bradley's Fantasy Magazine. This distraction may have had much to do with the decline in readership.

Another reason for the decline of subscribers was likely due to MZB's declining health, her increasing dependence on ghost writers, her husband's legal troubles, and finally the Marion Zimmer Bradley Fanfiction Controversy.

In mid-1983, the newsletter had an estimated 800-1000 subscribers when it suspended publication, citing lack of funds. The reason for suspension may have been for lack of funds, but it was much more likely because Bradley's career had really taken off on the bigger stage with the publication and attention to the publication of The Mists of Avalon. In the newsletter, Bradley herself also mentions her poor health and lack of energy: "I do not think I would have the strength to close this chapter in my life, whatever the toll it is taking on my failing health, the increasing age of which the only symptom is a chronic lowering of energy." [6]

In 1986, MZB started the newsletter again, ignoring those two "lost" issues entirely when she wrote: "We are starting this second series with number 31 simply for the sake of convenience; we know we put out 28 newsletters, but this makes a nice round number." It sounds quite likely that these two lost issues never existed.

The last newsletter was numbered #70, but there were actually only 68 of them (including six double issues).

Which Letters Get Printed

An editor in #11 wrote about how the printed letters were selected: