The Society for Creative Anachronism is "dedicated to researching and re-creating the arts and skills of pre-17th-century Europe." It has over 30,000 members around the world, concentrated in English-speaking countries. The group incorporated as a non-profit entity. [1]. 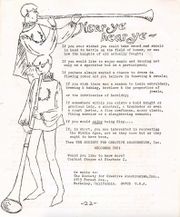 Founding of the SCA

The SCA is perhaps the oldest participatory reenactment group in the 20th Century. It began on May Day 1966, a group of science fiction and fantasy fans in Berkeley, California decided to play at being in the Middle Ages with costume, music, dance, food, and swordfighting. [2]

Inventing as they went, this group had six more events over the next year. During this time, Marion Zimmer Bradley came up with the name Society for Creative Anachronism (SCA). Many of the participants were fencers and/or just really liked to hit each other with sticks, and fighting with various blunt implements and medieval-style armor became a core activity. Knighthoods were given to the original fighters, and kingship was invented for the winner of a tournament, who also got to crown his lady as Queen. [3]. As members of the group moved around the country, they took the ideas and found many eager participants who put on events themselves.

From Darkover Newsletter in 1977:

Diana Paxson (author of our own Costume & Clothing leaflet) produced the very first SCA Tournament in May 1966, and it was MZB herself and Walter Breen who thought this was a good idea and kept it alive for a second tournament, even giving it the name SCA. They also founded its East Kingdom, which was either the first or second auxiliary kingdom. Adrienne of Toledo once said at a public party that both SCA and Darkover were attempts to rewrite the history of the Middle Ages, not as they were, but as they should have been. I don't know if MZB completely accepts that statement or not, but she certainly quotes it a lot. [4]

Some members do extensive scholarly research on topics from Scottish shoes to Damascene swords. Others emphasize the enjoyment and camaraderie.

While the term "dinosaur" is used for very early members of the Society, in the West, the term is restricted to those who attended the first ever event. Elsewhere in the Society, it has come to be applied to anyone who was in the Society in its first year.