Walter Breen was an author, a fan, and a convicted serial child molester.

Breen was the author of "Walter Breen's Complete Encyclopedia of U.S. and Colonial Coins." "Breen numbers", from his encyclopedia, are widely used to attribute varieties of coins.

He is also known for activity in the science fiction fan community and for his writings in defense of pederasty.

Breen wrote the book "Greek Love" under the name of John Eglinton. [1] [2] Breen dedicates this book "to my beloved wife." His wife at the time was Marion Zimmer Bradley.

Breen was active in Bradley's Darkover fandom. He was the co-editor of Starstone, Darkover Newsletter (earlier issues), and Day*Star. He wrote the Darkovan Language Review, The Gemini Problem, and The Darkover Concordance.

In Star Trek fandom, he and Marion Zimmer Bradley wrote "A Vulcan Valentine" which was published in The Other Side of Paradise and reprinted in Computer Playback. Breen also wrote Spock: The Archetype that Would Not Die. 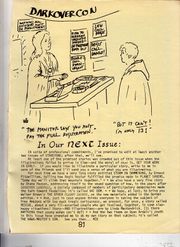 Breen did some occasional illos for Starstone. This one is for issue #2 in 1978. It portrays a young boy attempting to gain admittance at Darkovercon: Caption -- "The Monitor says says you must pay the full registration." "But it can't. I'm only 13." 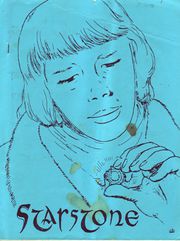 Breen died on April 27, 1993. He had been in prison serving a 12-year sentence regarding eight felony counts of child molestation involving a 13-year-old boy. See Breendoggle.

In 1977, Walter Breen talked about his journey as a fan, addresses a then-current critic's assertion that Darkover fans were all "fat 13-year olds in capes.":

AND WHAT'S WRONG WITH BEING A FAT 13-YEAR OLD IN A CAPE? Elsewhere this issue [of Darkover Newsletter ] mzb quotes a lot of people who wrote in variously denying being capewearers, 13s, fats or Trekkies. I (this is Walter Breen) didn't know she was going to do that or I'd have given her a note for inclusion. Read her LETTER FROM MZB first in [ Darkover Newsletter #7], then come back here, OK? Thanks. :: Back when I was a small skinny 13, the only people who wore capes outside the movies were doing parts in school plays or Superman takeoffs, and even then they were scorned as sissies unless they proved they were real fighters. I never got into that scene, being always a green monkey[3] interested in books, not sports, fighting, cars, girlchasing or sneaking beer. (This was 1944.) I discovered SF when I was 17 (mostly Heinlein, Wells, Stapledon), fantasy only later (HPL, Dunsany, Kuttner, M.R. James, Machen), and fandom not till I was 29. There I found many better writers (Sturgeon, Clement, Asimov, Clarke, Anderson & MZB, bless her), other polymath fans to make friends with and discuss ideas rather than argue or compete, and basically a place for green monkeys. What ideas? ESP, Forteana, psychic research, parallel universes, frontiers of science, reincarnation, Tolkien, STAR TREK, ancient civilizations, consciousness research, music, lots more. It's the implications of laran and the sociology I love on Darkover, not the swords; I'd be a greener monkey (sandalwearer) there than here! I've worn a cape, but mostly either on the Haight or at SCA; I'm 47 but don't believe in any generation gap. [4]

Walter Breen was married to Marion Zimmer Bradley from 1964 to 1990 (they separated in 1979), and until 1989, Bradley, Breen, and Lisa Waters lived on the same block in Berkeley, California.

Having been married to WALTER BREEN for almost 15 years, about all I can say about him is that he can still surprise me sometimes. How rare that is every married person in the audience can decide for him/her/itself! Being married to a polymath Renaissance Man probably has its bleaker side--he's the only person alive who can really make me feel inferior--but it certainly is a help when it comes too publishing magazines. Not only is he much more meticulous than I at the journeyman work of typing, proofreading, copyediting and layout, but he is also a caliigrapher of near professional quality; and if we are short of an illustration, he is likely to draw one at the drop of an expletive. What surprised me about this issue is that his knowledge of linguistics turned out to be roughly five times my own. Some day I am going to "discover something Walter can't do. (Well, he's no good at sewing, and he can't drive a nail straight to save his life... But I'm in no hurry. It's more helpful this way. Personally all I have to say about Walter Breen in a Darkovan context is: We are bredin--! love him. — Marion Bradley Breen [5] [6]

While Bradley conveys disdain for her ex-husband in 1989 in this statement in Darkover Newsletter #47, they were still in close enough collaboration for him to have been working on an update for her Darkover Concordance [7]:

"Around 1:00 pm the next day [October 18, 1989], the phone rang. It was Walter. "Lisa, the house is on fire, and I'm not joking!" (He did have a gas leak.) "Have you called the fire department?" Lisa said with admirable restraint, swallowing the urge to snarl. "Don't call me, call 991 [911?] ." He said, no, of course. When did he ever do anything so sensible?" So Lisa said, "Get out of the building," and called them herself. When the firemen arrived, the fire was out; my foster-son Kristoph had turned off the gas -- and Walter had made it as far as his front porch, in his bathrobe, with his box of computer diskettes... and the manuscript of his current book. (He has his priorities.)" [8]

Breen was a serial child molester. This fact was known to many but not all fans in the early 1960s. His actions and behavior with young children, at SF conventions in particular, were criminal. In 1954, he had been convicted of child molestation in Atlantic City and put on probation.[9][10]

In 1963, there was debate in the Berkeley, California fan community over whether or not to permanently ban Breen from Worldcon.[11] Part of the reason for the dispute had to do with controversy over whether science fiction/fantasy conventions could or should ban anyone at all, for any reason, reasoning that these were meant to be inclusive gatherings of people who were different from the mainstream. See The Great Breen Boondoggle, Or All Berkeley Is Plunged Into War.