Howard Phillips Lovecraft (1890-1937) was an American writer of weird fiction and horror. His stories, usually set in New England, deal with themes of humanity faced with forces beyond its control. Lovecraft found little success during his lifetime and could not support himself by his stories, but posthumously has had an enormous influence on horror and weird fiction, especially supernatural horror, and has been a founder of the cosmic horror subgenre. Lovecraft was the writer who has started Cthulhu Mythos, one of the biggest and most well-known shared universes in the literature. His work is considered to be part of the public domain, and as such has spawned numerous works based on it or inspired by it.

Because of his involvement in pulp magazines Lovecraft was a friend of many other writers who published in them, some of which later became prominent figures of the Golden Age of Science Fiction and/or participated in the early Science Fiction Fandom. Those writers, often referred to as the "Lovecraft Circle", include Robert Bloch, Clark Ashton Smith, Robert E. Howard, Frank Belknap Long, August Derleth, James Blish, Catherine Moore, Henry Kuttner and Fritz Leiber. Lovecraft also actively participated in Amateur Press Associations of his time and published his works in some science fiction and fantasy fanzines of the 1930s like Marvel Tales and Fantasy Fan.

Lovecraft allowed other writers to include elements from his works into their writing. That's how Cthulhu Mythos were born - by the authors from the Lovecraft Circle borrowing various elements such as names and settings from each other. He also reacted positively to his friends writing characters based on himself, even when they died in the story.

There are numerous professional works directly and indirectly inspired by Lovecraft's writings and life. Such creators as Neil Gaiman, Clive Barker, Guillermo del Toro, John Carpenter, Junji Ito and to some extent Stephen King have been strongly influenced by his work. One of the founding figures of weird fiction and cosmic horror, Lovecraft has been a major influence on the authors of Lovecraft Circle as well as on many weird fiction writers of the later times. Cthulhu, his most famous creation, is a popular character in the pop culture and can be found in a variety of different merchandise including mugs, shirts, and plushies. 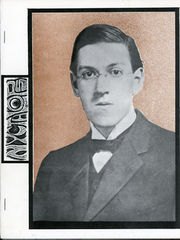 Photo of Lovecraft on the cover of Nyctalops #8

Lovecraft fandom activity can be named among the very reasons his name hasn't been forgotten. Initially his horror stories were published mostly in serial pulp magazines and were collected in anthologies only after his death. His first publisher was August Derleth, his friend and a big fan of his work, who together with Donald Wandrei founded Arkham House specifically with the aim to preserve Lovecraft's stories.

While Lovecraft's popularity started increasing after his death, for the most part of the XX century he was famous mostly among the fans of weird fiction and cosmic horror. By the XXI century, however, both he and his brand of horror have significantly grown in popularity. Fans of Lovecraft sometimes are referred to as "Lovecraftians".

Lovecraft is less famous for his actual writing than for what his writing has inspired. Large swathes of dark fantasy, weird fiction, and horror fiction draw inspiration from Lovecraft's work. Examples include Shoggoth's Old Peculiar, a short story by Neil Gaiman, and numerous roleplaying games; an early example was the Dungeons and Dragons Deities and Demigods supplement which contained monsters for the Cthulhu mythos, later games such as the Call of Cthulhu RPG from Chaosium Inc. were derived directly from this source. The fanbases of these works often extend far beyond fans of Lovecraft.

Lovecraft has also found notable success in Japan, a move which started in the 1960s with the first translations of Lovecraft into Japanese. [1] His success only increased there, with many manga, games, and novels being directly inspired by Lovecraft. However, these often bear little resemblance to the source material, and include various genres including light novels and erotica. Art of Lovecraft's monsters is also common, with them usually portrayed as either eldritch abominations or cute girls.

H.P. Lovecraft is considered a controversial figure because of his far-right views, especially his racism that was extreme even for his time.

Racism is a difficult topic for Lovecraft fandom. While fans have always been aware of it to a certain extent, it was less discussed in the early decades of the fandom, and when discussed it was often downplayed. One of the persistent myths about Lovecraft from that time (that was popularized by L. Sprague de Camp in his biography of Lovecraft) was that he disavowed racism when he got older; in reality, while some of his far-right views became less extreme later in life,[2] his racism never truly did. The awareness of Lovecraft's bigotry has been increasing since the 1960s and 1970s, when Arkham House started publishing his letters and published de Camp's biography, but has become especially significant in the 2000s and 2010s, when Lovecraft became much more popular than before and his fandom started becoming more diverse. Some creators, such as Welcome to Night Vale creator Joseph Fink, disavowed his influence.[3]

One of the most famous controversies around Lovecraft's racism is related to the World Fantasy Award. As the awareness of Lovecraft's racism grew, more and more fans started objecting to using his bust for this award, which has eventually led to changing the award trophy from his likeness to the current moon and tree statuette.

See H.P. Lovecraft and Racism for more information on this subject.

While Lovecraft's fandom generally appreciates Derleth's contributions to popularizing Lovecraft's, some aspects of his work and life has been criticized by fans and scholars. Among them are Derleth's "posthumous collaborations" (Mythos stories written almost completely by Derleth but published under the name of "H. P. Lovecraft and August Derleth") and introduction of the themes that many fans consider uncharacteristic for original Lovecraft's stories, such as conflict of good and evil, into the Cthulhu Mythos. Another issue that attracts a lot of criticism is him falsely claiming to own Lovecraft's copyrights, going as far as threatening to sue people who published Mythos stories without his permission. Some even object to him coining the term "Cthulhu Mythos" instead of "Yog-Sothothery" that Lovecraft himself used.

Sprague de Camp's biography of Lovecraft, published in the 70s, drew a lot of controversy and was a subject of many heated discussions in Lovecraftian zines, because many fans considered it quite inaccurate and judgemental. It didn't help the matters that at that time it was the first and only major biographical book on Lovecraft and the one that would be used as a default biography by people who wished to learn about Lovecraft's life. 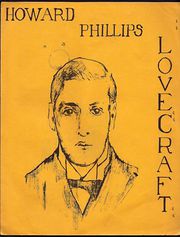 Portrait of Lovecraft from Nyctalops #1

In the Lovecraft fandom the line between original fiction and fanfiction is often blurred. Many of Mythos stories by various authors treat his writings as a base for an shared universe and can be interpreted as mostly original stories that borrow some elements of his works such as the names of creatures, eldritch beings or books, or even more vague elements such as general atmosphere and similar themes. Other works draw on the Lovecraft canon more closely. This applies to the works based on specific Lovecraft's stories, many of which, like the works from the first category, are also professionally published. Published Mythos stories are often referred to as "pastiches" by fans. That said, despite being largely based on writings of other person, Lovecraft fandom has more similarities with Science Fiction fandom and Fantasy fandom than with various transformational fandoms.

Cthulhu Mythos fanfics are often crossovers with other fandoms written by fans of these fandoms. Another common type of fanfiction, very similar to published Lovecraftian works, is the one that borrows creatures and places from Lovecraft's stories, but is about original characters. Both fanworks and professional Lovecraftian works are more often than not are gen, which may be caused by the fact that romance and sex are very rare for Lovecraft's stories even by the standards of the horror genre. Sexual Mythos stories often include tentacles, which in pop culture are considered one of the most "trademark" elements of the Lovecraftian horror.

Lovecraft as a Character

A lot of fans are interested not just in Lovecraft's works, but in his life as well, to such extent that it's been theoreticized that his biography is very relatable for nerds and outcasts. It also helps that Lovecraft is arguably one of the most self-documented people in the history due to the enormous amount of letters he wrote during his life, so there is a lot of material for people who wish to learn about him. This fannish interest in Lovecraft's personality has led to many appearences of Lovecraft and characters based on him in professional and fan fiction.

Probably the most common trope in the fiction with Lovecraft as a character is putting him in a Mythos story. The premise of such stories is often that "Lovecraft wrote about real things" and either somehow channeled the reality of Great Old Ones or even turned them real with his creative powers. The smaller subgroup is the stories about Lovecraft's life that don't have supernatural/horror elements.

Fanzines played an important role in the early Lovecraft's fandom. They often featured literary studies and fiction written by professionals as well as by fans, or by fans who later became professional critics and authors in the field of weird fiction. Some of the famous essays and stories were first published in those zines. The authors who contributed to the fanzines or even edited them include S.T. Joshi, Ramsey Campbell, Wilum Pugmire, Brian Lumley, Jessica Amanda Salmonson and Thomas Ligotti.

While Lovecraftian fanzines had been published as early as the 1940s, the peak of their popularity was in the 1970s-1980s:

Following the death of August Derleth in 1971, the Mythos slowly opened up to a new and more diverse set of writers. During the 1970s and ’80s, the largest development of the Mythos and Lovecraftian fiction outside of Arkham House occurred in small-press magazines—cheaply printed paper pamphlets, mostly written by and for amateur fandom. Amateur press associations such as the Esoteric Order of Dagon (EOD) would compile magazines for mass-mailings, allowing wider dissemination of new poems, short fiction, and articles about Lovecraft and the Mythos to be disseminated outside of the editorial control of any one publisher. <...> At the time, considerable Mythos fiction was being published in ‘zines like Crypt of Cthulhu (1981-2001, 2017- ) and Chronicles of the Cthulhu Codex (1985-2000), as well as the Chaosium Call of Cthulhu Fiction anthologies beginning with The Hastur Cycle (1993). It was a period of reprinting long out-of-print favorites, of re-discovering and re-publishing the original text of Lovecraft’s stories, and endless pastiches, sequels, prequels, and original works tying into the Mythos of various levels of quality and originality. [4]

Many of Lovecraft-themed fanzines were published by the Esoteric Order of Dagon amateur press association. Many of them were APAs.

Many Lovecraftian fansongs have been produced by The H. P. Lovecraft Historical Society. Some notable filkers like Leslie Fish also wrote songs that mentioned Cthulhu and other Lovecraft's creatures.