Perfect Timing is a gen anthology, a charity zine, distributed by the editors in return for donations to the Foundation for the Study of Infant Death.

Perfect Timing 1 Introduction by Colin Baker. Released: November 1998. Reprinted in 1999 with two additional stories, Time Ruins and What if We Went to Italy.

Cover blurb: "For 35 years the Doctor's adventures have been showcased on television, in comics, novels, videos, cereal packets and more recently on the internet. This project, timed to be released to celebrate this anniversary, has brought together some of the very best "Who" writers. Some names may already be familiar to you, some should hopefully become so in the near future!

For this collection, they have all kindly donated original stories, poems and drabbles featuring the Doctor, his companions, and his world, from all eras of the show, and from the books - stories from the Doctor's past, present (and future!) 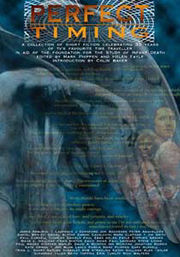 35 pieces to celebrates 35 years of time travel -- including:

A brief encounter for the Doctor and Susan - but what about those they leave behind? The Second Doctor pays a return visit to Venus for some Martial Arts instruction. Iris Wildthyme: The U.N.I.T. years... H.P. Lovecraft finds out that life can be stranger than fiction... Europa, the 32nd century. Miles dahwood is having a spot of bother with his fiancée and Count Dracula... The Fourth Doctor and Romana find that fiction can be stranger than reality... and the truth behind those missing Professor X episodes is finally revealed...! What is that has been hiding in the TARDIS -- and from the minds of the Fifth Doctor and his companions? The Sixth Doctor and Grant find themselves dealing with one of the deadliest menace to Earth -- a psychotic, theme park Santa Claus! The Seventh Doctor and Chris find something nasty lurking in the semingly peaceful, cloistered heart of In'sav'aar... The Eight Doctor visits some old friends, ad pays a return visit to Tomstone, Arizona... A Future Doctor faces an old enemy -- and a personal pain...

The Use of the Myth by Paul Cornell

From the Cutting Room Floor: Excerpts from Dark Path by David A. McIntee

The UNIT Things by Peter Anghelides

Masters of Terror by James Ambuehi and Laurence J. Cornford (The Master)

Not Necessarily In That Order... by Paul Ebbs (4th Doctor and Romana II)

Ghost in the Machine by Trina L. Short (Turlough)

Doing it Right by Alan Taylor (7th Doctor and Tegan)

The Ravages of Time by Mags L. Halliday (8th Doctor and Bernice)

What if We Went to Italy by Tom Beck (6th Doctor, Peri) 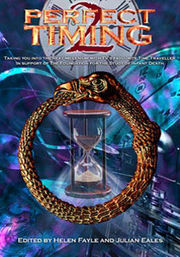 Cover blurb: "Once again bringing you a selection of short stories and artwork by both fans and professional writers and artists, distributed in support of the Foundation for the Study of Infant Death, and featuring TV's favourite time traveller."

The fact that this is an unofficial publication means the stories can be a little different, a little weirder than normal. There are stories with all the familiar Doctors, of course, but also many stories featuring future Doctors, unspecified Doctors, and Doctors who are not really Doctors at all. The book is divided into five sections: Past, Present, Future, Oblique, and Absolute. Each section is prefaced by some impenetrable text by Lawrence Miles. there is a lot of art in it, too, including pieces by comic book artists Dave Gibbons and Steve Yeowell. Yeowell's drawing of the Third Doctor as Austin Powers is my personal favorite. I won't try to cover all of the stories in this collection but here are some of the more notable works.