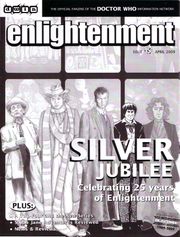 Enlightenment is the newsletter of the Doctor Who Information Network which was the oldest fan-run Doctor Who club in North America. It was based in Toronto. It disbanded on October 31, 2018. Issues run about 20 pages, and as of Spring 2011, there were 164 issues.

It has a sister zine of fiction from D.W.I.N., Myth Makers.

Comments Regarding Some of the Art

When I first joined DWIN (Doctor Who Information Network) I didn't know I was going to be asked to take on the art duties for the club newszine, Enlightenment, but I came with a few drawings that I had completed too late to submit to Peter Haining's The Key To Time. The club hoped to use the artwork, but as it turned out, we didn't have the capabilities to publish this sort of art. As a result Enlightenment 1 didn't have a proper cover, and I had to scramble to learn how to work in pen and ink for the second issue (using a stipple approach). By the time I first retired from Enlightenment, the club was able to publish shaded artwork, and my last regular cover for Enlightenment (Frontios) was done in this technique. [1]