Myth Makers is the Official Fiction Zine of the Doctor Who Information Network. 1-2 issues per year/irregularly. It has at least 15 issues. It contains fan fiction and art. Plans for the fanzine were orginally announced in 1980 in the first newsletter of the Doctor Who Information Network (DWIN). In 1985, fan artist Martin Proctor produced a cover in 1985 for Myth Makers #1. However, a lack of submissions, stories lost in transition between editors, and university/work schedules all factored into the delay of the first issue which finally debuted in 1991. It has a sister zine called Myth Makers Presents, a zine that published novel-length fiction. In 2009, Myth Makers Retrospective 1991-2001, a special commemorative issue was published online in pdf form.[2] 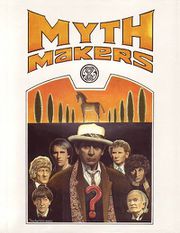 cover of issue #1 by Martin Proctor

Myth Makers 1 was published in 1991 and is 80 pages. Cover by Martin Proctor. 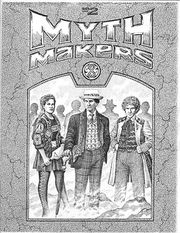 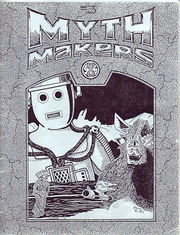 From the ordering page:

“The Doctor and the Dragon” by Violet Addison & David N. Smith (Re:Collections - The Best of Short Trips, Faction Paradox: A Romance in Twelve Parts)
It’s the oldest of tales, and everyone knows the ending… A young girl is about to be sacrificed to a dragon, but a wandering hero arrives just in time to rescue the girl and slay the monster. Which is an incredibly inconvenient spoiler, given he doesn’t want to kill it.

“Observer Effect” by Pete Kempshall (Short Trips: Transmissions, Bernice Summerfield: Old Friends)
1996 should be the best year of Jay’s life. Instead, when unexplained blackouts begin robbing him of his memories, he finds himself on the brink of madness. Where has his lost time gone? Why is a maniac clown hunting him across London? And how can the Doctor’s umbrella save the day?

“The Two Scientific Advisors” by Samuel Marks (Gallifrey Base fan fiction forum)
The Doctor and Jo Grant have been traveling the stars and seeking adventure for some time, leaving their responsibilities at UNIT behind. When they return, it seems that everything has changed. There’s a new scientific advisor in town, and the Doctor isn’t happy about it.

“The Sleeping Ones” by Daniel Tessier (Shelf Life, The Doctor Who Project)
As the planet Polyxo prepares for its grand festival, something inhuman and deadly stirs beneath the surface. Ace investigates the ancient ruins of the Stickmen, while the Doctor pursues his own agenda – but will everything go according to his plan?

“With All Awry” by Blair Bidmead (Faction Paradox: A Romance in Twelve Parts, Iris Wildthyme: The Panda Book of Horror)
The Doctor has of late (but wherefore he knows not) lost all his memories and indeed it goes so heavily with his (Eighth) incarnation that this strange, Camden Town flat in which he lives with someone called “Reg” seems to him a sterile promontory.

“Best Served Cold” by Samuel Marks
Donna Noble goes undercover at a scientific research facility, where doctors are on the brink of the biggest medical breakthrough in years. But a terrible secret lies hidden in the basement, and the Doctor is determined to uncover the truth – whatever the consequences.

“Don’t Drink the Tea” by Matthew James (Short Trips: How the Doctor Changed My Life, Short Trips: Indefinable Magic)
It should be an ordinary meeting of the Church Ladies Circle, but an alien influence is at work. Can the Doctor and Jamie stop harmless old ladies turning into giant savage monsters? Desperate measures are called for and Jamie pays a heavy price. Whatever you do, don’t drink the tea.

“World of Tomorrow” by Chris Kocher (Myth Makers,Trenchcoat)
When a New York City teen stumbles onto a horde of Cybermen below the 1939 World’s Fair, he finds fast allies in the Doctor and Charley – but can they stop a mass slaughter by the heartless cyborgs?

“One Much Like Another” by Andrew K. Purvis (Short Trips: How the Doctor Changed My Life)
Stop me if you’ve heard this one. There is a dark wood carpeted with bones. A luminous monster that no mortal dares approach. A village with a secret. A recluse with a knife as bright as her smile. But the Doctor’s fury is roused by something else entirely.

“The White Ship” by Stephen Hatcher (Short Trips: Indefinable Magic, Short Trips: Defining Patterns)
The White Ship, the Titanic of the Middle Ages. As the doomed ship sets out on its final journey, the Doctor, Vicki and Stephen are aboard, trapped by royal intrigue and friendship. The Doctor is adamant: there is nothing they can do to help; even escape may be beyond them.

“Strays” by Cody Quijano-Schell (Bernice Summerfield: Secret Histories, Wildthyme in Purple)
In times of crisis and impending alien invasions, the Doctor has always been humanity’s greatest ally. The Time Lord has barely survived his darkest hour, and finds that he may have preferred the alternative of oblivion. Alone and with the TARDIS in ruins, who will help him cope with his own memories?

"This is good stuff, professional-quality fiction (which is not something that can be said of most fanfic), with our favorite Time Lord caught up in all manner of scenarios funny, serious, and sometimes both at once. As when the Eleventh Doctor meets a dragon (thanks to River). Or the Tenth Ninth Doctor gets a new furry companion. Or the Third Doctor and Jo meet UNIT’s new scientific advisor. If you need more escapism with the Doctor — and who doesn’t — here ya go."[14]