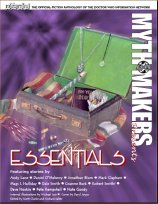 Myth Makers Presents is a Official Fiction Zine of the Doctor Who Information Network and is a sister zine to Myth Makers. It has at least 5 issues. It contains novel-length fiction.

As an anniversary special, the latest issue follows a theme: Myth Makers Presents: Essentials offers us 13 pieces based upon an essential element of the series (according to the respective authors). The highlight of the issue is Daniel O'Mahony's 'A rag and a bone', in which he manages to both satirise the more pretentious symbolism of some Who writing, while using such symbolism to make a strong point about his essential, the Doctor's connection to human history. Other highlights are Mags Halliday's 'The Silk Road' with the eighth Doctor, Anji, Fitz offering a new riff on 'Marco Polo', and Peter Kempshall's 'Last minute', a tale about the role of the cliff-hanger that manages to capture the character of the Doctor well.Other pieces are enjoyable, but quite go that extra mile. Dale Smith gives us a stunning opening paragraph, but the prose seems ill at ease with the farce that unfolds. Graeme Burk's format-bending 'The Second book of the Dok'Tar' is clever, but misses an obvious trick. Dave Hoskin's closing story had perhaps the greatest potential, which his execution does not quite realise. I wonder whether the theme became more of yoke than an inspiration with a number of stories seeming too mechanical in illustrating their essential.

The most famous names often have the least familiarity with the show. Some of the best essentials are from the fans and I wonder whether the placement of Stephen Kitson's contribution as the very last was because the editors agree with me that it is among the best: "in the end there's just this man. In his box. And he can go anywhere.' [1]