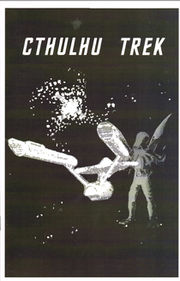 Cthulhu Trek was written and edited Les Thomas, layout and illustrations Cabin Campbell. It is an anthology of fiction, some with explicit sex and violence.

It includes Bloch's "history" of Redjack (Jack The Ripper). The roles of Jeffery Combs in the Star Trek Universe & his role as Herbert West in the Lovecraft Re-Animator film series. Plus, three short-short stories by horror master Sutter Kane.