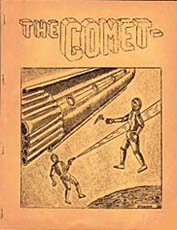 cover of the very first fanzine, "The Comet" (published in 1930)

Science fiction fandom formed in the 1920s around American pulp magazines[1] and has expanded in scope since its humble beginnings with the development of sf novels, television, and movies. The fandom was born in the letter columns of the first sf-only magazine, Amazing Stories; Hugo Gernsback, the magazine's publisher, is credited by many with creating science fiction as a genre in its own right.[1][2] Since the letter column included the letter writers' addresses, early SF fans found it easy to get in touch with each other.[3] Soon, fans were writing letters directly to each other, then (in some cases) forming local fan clubs[4], then creating fanzines to trade with each other, then having conventions so they could talk in person.

The practice of making fanzines originated in science fiction fandom in the 1930s. The first printed fanzine was "The Comet," a fanzine published in 1930 by Raymond Arthur Palmer and published by the Science Correspondence Club in Chicago. [5]

Fan conventions, also known as cons, were and remain an important way for fans to meet in person. Science fiction writer Frederick Pohl claims that the first con was a trip that he and seven other New York-area fans took to meet a similar group of fans in Philadelphia in 1936. However, the title of first ever con is disputed; a group of British science fiction fans had a more carefully planned public event in Leeds on January 3, 1937.[6] The first World Science Fiction Convention (Worldcon) was held over the July 4, 1939 weekend in New York City and, aside from a few breaks during the second world war, Worldcons have been held annually ever since.[7] As have plenty of other sf conventions, of course - the closest thing to a full list of current science fiction conventions can be found on Wikipedia.[8]

Since the 1960s, producers of science fiction movies and television have used science fiction conventions to promote their work. Gene Roddenberry brought the pilot episode of Star Trek to a Worldcon before it aired on television. Nevertheless, TV and movie SF have stayed a small part of 'classic' non-profit SF/fantasy conventions such as Worldcon and others.

Eventually commercial organizations started putting on larger for-profit sf/media/gaming/comic conventions that combined many fannish interests, including TV and movie SF, under one large, expensive roof. The two largest of these in the US are Dragon*Con and Comic-Con. Interestingly, both media fans and classic SF are just two small tracks of the larger whole, gamers are another, etc.

There are thousands of science fiction fanzines. You can see a list of over 500 at ZineWiki, more at eFanzines, and a few are documented here on Fanlore:

Before SF was made into films and television shows, SF fandom was by definition a literary fandom. Later, when SF moved to the big and little screen, new fans wanted to join fandom who were unfamiliar with fannish tradition and liked things that Fandom scorned. Many of these new fans were women. Tension ensued.