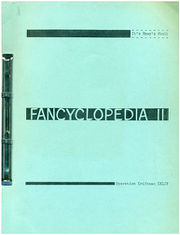 cover of second edition, in print

Fancyclopedia is the third edition (first online edition) of a large, fan-edited encyclopaedia hoping to chronicle the history of science fiction fandom. As its front page says, "Like Wikipedia, while your editors do their best to maintain a common style and presentation, Fancyclopedia is edited by its users. And like Wikipedia, all fans are free to contribute and edit topics, suggest authors, and argue with the editors on matters of content, style or presentation. Make your changes — don't wait for permission!"[1]

Fancyclopedia 3 was founded in 2007 on the EditMe platform.

In 2011 the site migrated from EditMe to Wikidot, with a corresponding change in URL.

In December 2019 the site migrated from Wikidot to MediaWiki software. As of 2021 it remains active.[2]

Fancyclopedia I, which can be found replicated at the link above, was published by John Bristol Speer in 1944. It contains definitions for pseuicide ("also called pseudocide and some unprintable names"[3]), fandom ("Physically, it mite be imagined as comprising all the science fiction houses, and all fans' dens as well as other storage space and equipment that they use in fan activity, and convention halls and streets and eke park benches while groups of fen are in possession of them. Unincorporated territories include the possessions of mere scientifictionists,"[4]) and conventions ("The first Science-Fiction Convention was at Philadelphia in 1936, when the NYB-ISA visited the Philadelphia branch. It was marked by horseplay and cameraderie." [5]) It also contains entries on communism, socialism, tesseracts, werewolves, and zombies, which are not notably fannish but indicate the drift of fannish thought at the time.

Fancyclopedia II, now also online, was first published in 1959 by Dick Eney. It is, if this is possible, even more whimsical than the first edition:

EYETRACKS When you read a new book you get eyetracks all over it. Then it isn't mint any more. Nearsighted James White is the only fan who leaves a nosetrack between his eyetracks. It's said by John Trimble that the reason so many fans wear glasses is to keep from getting eyetracks on their precious volumes.[6]

Zine is not defined in the first edition, but appears in II only as "Magazine, dummkopf." GAFIA, defined in the first edition as "gafia - (Wilson) - Get Away From It All; motto of escapism,"[7] now has undergone "a complete reversal of significance so that now 'that flash of sanity known as Gafia' refers to a vacation from fandom back in the world of normalcy, where nobody reads that crazy Buck Rogers stuff."[8]

The previous editions are wellsprings of knowledge, both about the provenance of fannish ideas and about the characteristic tone of early science fiction fandom.

From an Ebay Seller About the Second Edition

It is a print "190-page fanzine/book edited and published by Richard H. “Dick” Eney in 1959 in an edition of 450 copies... It is well-mimeographed on yellow bond paper with light blue cardstock covers, strap-bound... Eney undertook a massive revision and updating of the original Fancyclopedia, which was written by Jack Speer (as “John Bristol”) and published in 1944. As Speer wrote in the original volume: “The purpose of the Fancyclopedia, not fully realized, is to define all expressions, except nonce-words, which have an esoteric meaning in fantasy fandom, and to supply other information, such as that on Esperanto, which may be needed to understand what fans say, write, and do.” Fancyclopedia II offers detailed information on fan slang, fan organizations and fan history, and although some of the information is dated it is still valid."