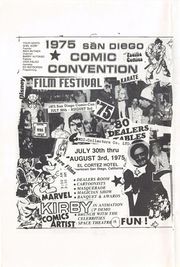 a fan's exuberant creation advertising the 1975 con, printed in The Galaxy of Fandom

Comic-Con International: San Diego, usually referred to as San Diego Comic-Con (SDCC) or simply Comic-Con, is the second largest North American fan convention and one of the oldest fan conventions in general, having run continuously since 1970. With an attendance of 167,000 in 2015, it was the largest comic book convention in North America until New York Comic-Con, run by ReedPOP, surpassed it in 2014 and has not been able to grow due to venue limitations. Much of the reported "attendance" for SDCC, however, is for badged events and does not include attendance to related offsite events that may or may not require a badge.[1] Comic-Con International, the parent organization of SDCC, also puts on Wondercon in Anaheim and runs the Comic-Con Museum, where it hosts the SAM: Storytelling Across Media symposium. They also ran Alternative Press Expo from 1995 to 2014.

The SAN DIEGO COMIC CONVENTION (Comic-Con International) is a California Nonprofit Public Benefit Corporation organized for charitable purposes and dedicated to creating the general public’s awareness of and appreciation for comics and related popular art forms, including participation in and support of public presentations, conventions, exhibits, museums and other public outreach activities which celebrate the historic and ongoing contribution of comics to art and culture.[2]

Over the years, SDCC has become one of the primary venues for canon creators and stars to announce, create interest for, and sneak preview parts of their "genre" (not only comics and superhero-related but also science fiction and fantasy) films and television shows. It is now typically attended by over 130,000 fans and tickets sell out quickly. Alternate spellings for the convention include ComicCon and Comic*Con.

My San Diego experience was made superb by the gathering of friends. [snipped] We got ourselves volunteered to run the ASFA Print Shop - this proved really advantageous because it gave us a base of operations to work from. We could plop our tired feet behind the table, stash some food where we could get it, and hang out with the art work. Oh yeah - we worked too.

We were really terrified about the art show this year, but the staff proved to be willing to roll with the problems and managed to cover pretty well. Nothing closed down the show, and things - although slightly dissarrayed - worked out. The Director was reassured several times that there are always little mistakes to correct at your first shows.

There was the Great Nipple Shortage of '94 controversy. The rules specifically said nothing explicit would be excepted for display. San Diego has laws about this sort of thing, and there were kids there. When we hung, however, nothing was checked until specific complaints were raised (mostly by people who wanted to show nipples themselves but didn't and then were bitter). The only pieces sensored were pieces that had been complained about.

There was a Lion King picture (not done by Disney) that originally was hung without copyright blurb, and offered for sale. This was corrected once the art director was informed of the consequences if caught.

The rest ol the show was lovely. There were many pros rep resented. and a good grouping of art that cut across the genres. There were some fabulous colored paper cuts layered over each other to make tremendous compositions. The series of 3D art was marvelous and not stuffed to the side of the show where no one would see. [3]

The rumours about his show were pretty scary. A new director was in charge, someone who had never run an art show before and had instigated some pretty odd and unpopular rules. Right off the bat was the odd rule about sending in prints, photos, sketches or slides of all works you intended to show at the con! Yeeks. I don't know anyone who followed this completely but we all played along and hoped this wasn't a precursor to oddness to come at the show. Paperwork came out late and some artists didn't get it at all. 'With the final paperwork came the new San Diego nudity rules as they pertained to the art show. Holy puritanical, Batman! Not even bare female breasts were to be allowed into the show. Show a penis and they'd string you up. But then the show told us up front and it wasn't their fault. These were city rules and even extended to the dealers room (Olivia's booth with the lovely huge originals had masking tape over all the nipples. One has to wonder if the city is going through the art museums putting tape over those.)

Unlortunately at the show the rules were arbitrarily enforced. While setting up, I counted twelve pairs of bare breasts (hmm, that makes me sound sick....). They were all hung

up but over the four days of the con tape appeared on some and others disappeared completely. It seems that only pieces that got specific complaints were dealt with. Otherwise they seemed to he ignored. There was some bad feeling among the artists over the capaciousness of the policy. Overall the show ran pretty smoothly and I think most people were satisfied. There was some problem with checking bags as long lines of people waiting to both check bags and to pick them up. The show had a nice mix of pros and amateurs and the bidding started early. Folks at this con, on the average, know how to bid both on the sheets and at the auction. Jumping bids in both places. It took eight bids to go to auction and there were forty-four in the auction. Unfortunately, with the high bids to auction most bidders had blown their wad by the time the pieces went to voice auction. Most pieces went for little more and often to the last bidder on the sheet. Still all in all money was good. I made about $11,000 before they took off the commission, up $200 from last year. I'm not sure how long it will take for the cheques to get out but with the new director this year I'm not sure how long it will take. [4]