Like many early science fiction fans, Morojo was an Esperanto enthusiast and her fannish name is an Esperantoism.[1]

Morojo served as treasurer and in other roles for the Los Angeles Science Fantasy Society for many years and was also a member of the Fantasy Amateur Press Association.

Morojo is considered a groundbreaking cosplay pioneer who, in 1939, appeared at the first Worldcon in the first known hall costume. The costume, which was designed by Morojo, is often referred to as futuricostume. She was accompanied by her partner at the time, Forrest J Ackerman, who was wearing a matching costume also made by Morojo.

In 2016, the International Costumers Guild (ICG) recognized her as the “Mother of Convention Costuming” with a video award presentation at MidAmeriCon II, the 74th Worldcon.[2] 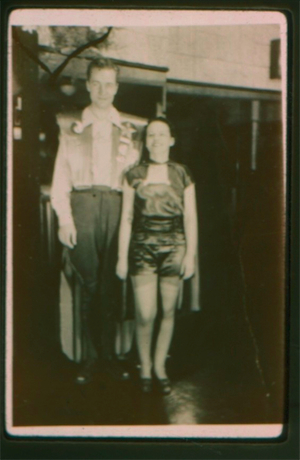 Forrest J Ackerman and Morojo in WorldCon, 1939 with the first hall costume reported