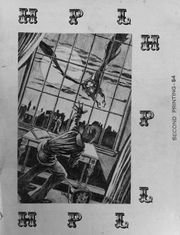 HPL was a Lovecraft-themed zine published by Meade and Penny Frierson in 1972. It featured both fiction (short stories and poetry) and non-fiction (in such varied forms as reviews, literary analysis, memories of Lovecraft's friends and even Lovecraft's astrological chart), as well as a lot of art, most of which was illustrations for Lovecraft's stories and portraits of Lovecraft's characters. It had a run of 1,000 copies.

The zine was reprinted in the 80s as the "second printing".

Paul Berglund has asked us to recount the history behind our 1972 publication in tribute to Howard Phillips Lovecraft, called HPL. Never heard of it? Subscribers who had paid from $1.50 to $3.00 for a copy and the many contributors who received free copies were amazed when HPL arrived by mail in March-April 1972. It was self-covered, a total of 144 pages on slick 70# paper of 8.5 x 11 inch dimensions. Within the pages lurked 17 full page illustrations (plus the front and back covers) that depicted scenes from Lovecraft stories and 93 additional illustrations by 20 different artists. The artwork included a total of 36 small pieces and 5 full pages by the associate editor for art, Kansas City artist S. Herbert "Herb" Arnold. There were 19 pieces of fiction, including the opening chapter of the forthcoming Arkham House novel, The Burrowers Beneath by Brian Lumley. Its articles department, thanks to the many contacts of the enthusiastic associate editor for articles, Stuart David Schiff (whose brilliant Whispers magazine has long since eclipsed this early one-shot effort), attracted a total of 25 articles by 21 authors, including Fritz Leiber, Robert Bloch, E. Hoffmann Price, and Frank Belknap Long, among Lovecraft's surviving contemporaries. Finally, there were 20 poems by 13 different writers. I must now admit to my nom de computre; as Ralph Wollstonecraft Hedge I had scribbled some verse for the magazine that Paul Berglund has kindly reproduced elsewhere in this issue of Nightscapes (which contains two pieces not in HPL but which August Derleth had previously published in The Arkham Collector under my own name). Near the middle of the magazine there were some letters that HPL might have received; apparently, my satire struck the funny bones of many readers -- I recall particularly rewarding feedback from Willis Conover, one of Lovecraft's youngest correspondents, who felt he recognized himself in some of the letters, and Brian Lumley. [1]

So we had some subscriptions and made the initial mailing and then waited and waited. Ads in the newspaper of the science fiction community Locus, good reviews, word of mouth and media coverage (by way of a then-popular tabloid on comics and movies called The Monster Times) spread the word swiftly in the summer of 1972, and the first printing of 35 numbered hardbounds and 1000 self-covered volumes was sold out by summers' end. In September 1972, 500 copies of a 2nd printing were ordered, since the printer would only hold the plates for 6 months. These do not qualify as a 2nd edition, just as second printing because the only changes were two removals: the $3.00 on the top of page 2 and the note at the bottom of page 3 as to the 1000 limited print run.

The fun continued when feedback and additional art, articles, poems, and stories were incorporated into our mimeographed zines called The HPL Supplement No.1 (October 1972), 64 pages of lavish praise, No. 2 (early 1973), 56 pages less of praise and more of omitted material, and finally much later No. 3 (now all out-of-print).

Cover art by Robert Kline, back cover by Herb Arnold.

HPL contains a bit of everything, and it’s almost all good: an interview with Frank Belknap Long. Robert Bloch talking about how cool Lovecraft was. (They were both alive back then.) Reminiscences on HPL by E. Hoffman Price, including possibly the first transcript of the “Lovecraft couldn’t believe that two men could drink a whole six-pack of beer” story, which Price told at some convention panel. Price’s astrological chart of Lovecraft. Reviews of the Lovecraft Night Gallery episodes, the play “Lovecraft’s Follies”, and the various awful Lovecraft movies. A big essay by Richard Tierney on the differences between Lovecraft’s and Derleth’s Mythos. “The Horror Theme after HPL”, a great essay by William Scott Home, which introduced me to the idea that “The Beast in the Cave” was about the terror of puberty (remember also, I was about 11 when I read this! The essay was like foreshadowing!). Then there’s the poetry, fiction and humor, like the ad for the Lovecraft cookbook, “The Skulker in the Scullery”: “Fade away to nothing on 15 cents a day!”. The fiction varies, from Manly Wade Wellman’s dumb story (in which the Necronomicon is defeated by holy water; it certainly ain’t no “Desrick on Yandro”) to a fair amount of forgettable stuff set in 7-point type to some cool finds. Brian Lumley contributes the first chapter of his Cthonian novel, “The Burrowers Beneath.” Ramsey Campbell, the master of psychological horror, contributes… an extraterrestrial weird-fantasy story?!? A brief note explains that Gahan Wilson said he doesn’t contribute to fanzines, but that the publishers got in touch with them and he wished them well and said, yes, he loves H.P. Lovecraft. Gary Myers’ “The Return of Zhosph” appears here for the first time (together with an illustration by a very young Myers himself!). L. Sprague deCamp contributes poetry. Literally everybody who was alive in the ’70s is in this thing.

But the best thing about this book, and the biggest influence on me when I read it, was the art. These were the first images of Cthulhu, Deep Ones, the Dunwich Horror etc., that I had ever seen, since I hadn’t read the stories themselves yet. The list of artistic contributors is as impressive as the authors: Tim Kirk. Steve Fabian. Virgil Finlay. By far the most prolific contributor is Herb Arnold; not the sculptor of found objects who has a posthumous website, but another Herb Arnold, a now-obscure comic artist. Arnold’s beefy, delicious crosshatched renderings of ghouls, Deep Ones, Elder Things, Chaugnar Faugn and frankly just about every Mythos thing imaginable, fill the book. I haven’t been able to find much information about him, except that he was apparently an assistant to Richard Corben… and lo and behold, here’s Corben’s drawing of Azathoth!

HELLLLLL YEAH. This was one of the two Corben things in my dad’s library; the other was The Last Voyage of Sinbad the Sailor. The art in HPL epitomized “good artwork” for me when I was a kid, and I’ve always been inspired by the wonderful B&W work I discovered there. The way I draw pretty much every Cthulhu Mythos/Lovecraft thing is inextricably influenced by Herb Arnold, et al. Also, I was fascinated by other artists in the book who had a more naive style, artists like Mike Scott and Denis Tiani (who drew the Lovecraft portrait above). Tiani was in the Harry O. Morris/Nyctalops circle and has had some work published by Centipede Press. Certainly, their cartoony work seemed, frankly, easier to imitate than the staggering craft of Corben, but I also found something very pure & evocative in their art, like Tiani’s vaguely foreboding, fascinating doodles of light beams breaking through clouds near crumbling towers, or this Mike Scott drawing of The Strange High House in the Mist:

If Denis Tiani, Mike Scott, or Herb Arnold read this blog, I want you to know: you are freaking awesome. Sadly, Meade Frierson is no more, but he wrote a great essay about the genesis of the magazine which you can read here. This whole book is full of gems. Someone should get the reprint rights and put the whole thing out as an eBook. I wouldn’t be a Lovecraft fan today if not for “HPL.” [2]

One of the best gifts you can get for your birthday is something you really like but didn't know existed. Cliff, having read my post about the Spawn of Cthulhu anthology, and having discussed it with me at length, recalled a Fanzine from 1972 which was equally important and influential to the growing popularity of the Cthulhu Mythos, a massive 144 page amateur magazine titled simply HPL. (subtitled on the inside cover, A Tribute to Howard Phillips Lovecraft. )

Don't let the term "amateur" confuse you. There is material in this magazine that many an editor of professional anthologies would have given an eyetooth for. There is fiction by Manly Wade Wellman, Gary Myers, Ramsey Campbell, and even the first chapter of Brian Lumley's Arkham House novel The Burrowers Beneath. There are articles by Joseph Payne Brennan, Robert Bloch, E. Hoffman Price, Richard Tierney, and Fritz Leiber. There are also tons of illustrations by artists like Steven Fabian and Richard Corben, plus poems from L. Sprague de Camp and Robert E. Howard and a couple of (at that time) unpublished letters. An amazing package that went for three bucks back in the day and is almost impossible to find now. My copy is actually made from Cliff's own copy of the original.

What I particularly like about this magazine is that while it contains material from all the professional writers and artists mentioned above, there is also a wealth of articles, stories, and art done by fans of Lovecraft. This gives the mag its 'fannish' feel, which greatly appeals to me. I have always loved fanzines. In the pre-internet days, APAs (amateur press associations) were the way that fans communicated with and hopefully informed one another.

Fans would type out long and often well researched articles about their favorite subjects and mimeograph copies to send to fellow fans. Sometimes groups of fans would mail such fanzines to a central mailer and those zines would be collected and stapled together by the CM, who would then send copies of the collected zines out to all the folks who had contributed. I once belonged to just such an APA (though we had photocopy machines by that point) and my blog still reflects the sensibilities of those days. A little autobiography and a lot of articles. Much like blogging. They even had comments. You just had to wait until the next issue of the APAzine to read or reply.

Anyway, as I mentioned, I'd never heard of the HPL zine until Cliff presented me with a copy on Wednesday. I have spent much time perusing it, and it is a fine addition to my Lovecraft collection.[3]