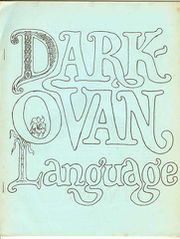 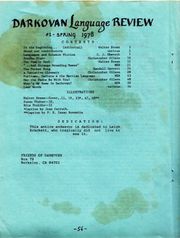 back cover, which includes the Table of Contents

The Darkovan Language Review was published in April 1978 was a "Fantasy/Science Fiction fanzine created and published by the writers C.J. Cherryh, Randall Garrett and Marion Zimmer Bradley.

There was only one issue despite the fact it was advertised as "Darkovan Language Review #1."

Dedication: "This entire endeavor is dedicated to Leigh Brackett, who tragically did not live to see it."

In 1979, Bradley responded to a fan who wanted to know more about how Darkovan words were pronounced, and said "Sometime next year Hourglass tapes will do a Darkovan pronounciation tape." [1]

The Flyers, Ads, and Blurbs

We are also accepting orders for the DARKOVAN LANGUAGE REVIEW, with material by C J Cherryh, Christopher Gilson, C.A. Cador, and some unpublished and republished work by me myself; this deals with the languages of Darkover, but it should be of interest to any reader with a remotely scholarly interest in such things. (For instance, it is the only place where you will be able to read THE POCKET SONG; A STUDY IN DARKOVAN FOLKLORE, by Randall Garrett, one of the funniest things ever written by this notorious humorist.) It will cost $2 pre-publication; after February 28 the price will jump to $3. As with STARSTONE, if you want it mailed first class add $1 for postage, and special packaging. [2] 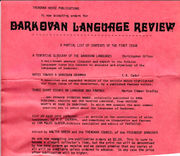 flyer: "Non-fiction about Darkover, linguistics and science-fantasy by Walter Breen, C.J. Cherryh, Randall Garrett, Christopher Ilson, and Marion Zimmer Bradley; serious/scholarly AND humorous. Bound to be a collector's item some day."
These two selections were listed in the flyer, but were not in the finished piece: "Notes Toward a Darkovan Grammar by C.A. Cador (A rewritten and expanded version of the article which highlighted the first issue of the Darkover Newsletter, by a published Fantasy writer.)" " something on linguistics and fantasy by Ian Miles Slater (folklore specialist and editor of the zine "Fantasie")"

From the short bios in the front of the zine:

Having been married to WALTER BREEN for almost 15 years, about all I can say about him is that he can still surprise me sometimes. How rare that is every married person in the audience can decide for him/her/itself! Being married to a polymath Renaissance Man probably has its bleaker side--he's the only person alive who can really make me feel inferior--but it certainly is a help when it comes too publishing magazines. Not only is he much more meticulous than I at the journeyman work of typing, proofreading, copyediting and layout, but he is also a caliigrapher of near professional quality; and if we are short of an illustration, he is likely to draw one at the drop of an expletive. What surprised me about this issue is that his knowledge of linguistics turned out to be roughly five times my own. Some day I am going to "discover something Walter can't do. (Well, he's no good at sewing, and he can't drive a nail straight to save his life... But I'm in no hurry. It's more helpful this way. Personally all I have to say about Walter Breen in a Darkovan context is: We are bredin--! love him. — Marion Bradley Breen [3]

Excerpt from the Zine

When I wrote the first of the Darkover novels (over twenty years ago now) I was fired up by a resolution never to commit a logical blunder of the "Martian language" variety, and promptly endowed my imaginary planet with a variety of languages. However, I have a very bad memory, and no particular liking for keeping track of the series with charts and graphs, so it has become something of a nightmare when I try to remember who is supposed to be speaking which language. However, this seems to add to the fun my readers have with the series. Back when I was writing in to those long lettercolumns they used to have in the old pulps, nothing made me happier than to spot a scientific error in a story by one of my favorite authors. I still remember the warm pleasure it gave me (while I was still a biology major) to write to Theodore Sturgeon, apropos of THE GOLDEN HELIX, and explain why it was completely illogical to assume that human reproduction would eventually achieve a state where the normal birth was quintuplets or sextuplets and a single birth was regarded as a vaguely disgraceful atavism and a threat to a man's self-image of virility. My readers seem to get the same kind of fun out of writing me to inform me that my syntax, linguistic formation of plurals and multiples and the like, are in defiance of all the rules of logic and languages. Well, they're welcome to their fun; it just gets them all the more involved in the Darkover novels, and that doesn't really hurt me. Quite the reverse. If they get any pleasure out of picking my imaginary languages to pieces, they're going to get the next book, to see if I've learned better—or if they can catch me with my syntax down again. After all, I spotted a linguistic anachronism in Tolkien! And if an Oxford professor can do it, who am I to be infallible?

I too was disappointed that the "Language Review" didn't tell me how words like chieri and bredha are pronounced. Of course I [have] made un my own versions (because I seem to be the kind

of person that has to be able to pronounce a word in order to read it). But I feel funny about saying them aloud to anybody else. If Marion does hear these words in her head as she writes them, perhaps she could read them off onto a tape (in the order of the Glossary list, say) and maybe someone would be willing to work out a pronunciation key. If no one there wants to do it I would certainly be willing to give it a try -- either in phonetics or in some kind of unambiguous spelling. [4]