Theodore Sturgeon was an American science fiction and horror writer and a critic. He was author of over 400 reviews and more than 200 stories. 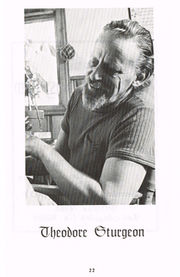 from the 1973 Equicon program book, where Sturgeon was a guest of honor

His Work for "Star Trek"

The character Sturgeon from "The Man Trap" was named after him. Sturgeon was also referred to in dialogue in DS9: "Far Beyond the Stars", and thus has a namesake in the Star Trek universe. [1]

Outside of Star Trek, Sturgeon is well known in fandom for Sturgeon's Law, which is commonly cited as "ninety percent of everything is crap." Sturgeon made the comment in reference to the mainstream perception that the science fiction genre in particular produced low quality works.

Fanfic fans often cite Theodore Sturgeon and Sturgeon's Law when discussing the quality of fanfic and other fanworks.

Slash fans point to Sturgeon's unconventional sexual practices as well as his attempts at progressivism in stories like "The World Well Lost" as proof that he intended both "Shore Leave" and "Amok Time" to illustrate that James Kirk and Cmdr. Spock were in a homosexual relationship.[2] Both stories were rewritten dozens of times by a large team of writers including D.C. Fontana, NBC's Stan Robertson, Kellam DeForest and his researchers Peter Sloman and Joan Pierce, Robert Justman, Harve Bennett and Gene Coon, along with Gene Roddenberry Himself. Any one of these people, intentionally or unintentionally, might have included the elements that fans interpret as proof of gay.

In May 2016, D.C. Fontana was asked whether the script for "Amok Time" contained "homosexual double-entendres" and replied as follows:

In answer to your question, NO - there were no homosexual double-entendres in the script - at least none that were deliberate. If some viewers chose to read that into the dialogue, etc. that's their point of view, but certainly not ours. Writer Theodore Sturgeon was trying to reveal Spock's inner human in a struggle with what his culture, his upbringing and his half-human/half-Vulcan heritage had instilled in him about emotion and controlling it in an out-of-control situation. It also was a peek into the Vulcan culture that no one had seen before. That's ALL we were doing. I've heard this nonsense (especially about Kirk/Spock) for years. There is no basis to it. I hope this answer is helpful to you. [3]

"In the first draft of the Star Trek episode "Amok Time" by Theodore Sturgeon, both T'Pring (Spock's fiancée/wife) and Stonn (T'Pring's chosen consort) are stripped of their rights after Spock kills Captain Kirk. Stonn because prior to the fight he flies into rage and attempts to murder Spock and is behaving irrationally and illogically. He is pronounced "not Vulcan" by T'Pau and becomes the property of Mr Spock. In this draft, being Vulcan is not an ethnic/genetic identity, but a citizenship status.

T'Pring becomes Spock's property because she challenged Spock and lost and is now obligated to give him absolute obedience. And then in a twist, Spock gives Stonn back to Vulcan ("it is possible but has never been done before" says T'Pau) and then "gifts" T'Pring to Stonn as his property with the requirement of absolute obedience. "See that you exact what is due to you - as her absolute owner."

Much of this was removed from the aired version. Vulcan is a very harsh patriarchal world. And Vulcans know how to exact their due when their beloved captain is murdered."[5]

Sturgeon was not gay; he was a nudist as were many other science fiction writers of that period. With a number of other writers, he attempted to include progressive themes in his stories. His favorite idea seems to have been a gestalt or hive mind which he explored in his novels The Cosmic Rape and More Than Human, both of which portray it as a positive change that will help humanity. In Venus Plus X, he created a future like the Star Trek: The Next Generation episode "The Outcast" without war, disease, crime, or sex -- or even gender. And in "The Sex Opposite" he postulates aliens who reproduce like paramecia, via "a non-sexual interflow between the nuclei." They have lived among humans for a long time and encourage the emotions that inspire the best of human cultural expression.