In 1961, organizers of the 19th World Science Fiction Convention tried to ban Breen from attending due to his "unsavory" activities with children. Many in the science fiction community, however, felt that the accusations against Breen were unfounded and that while Breen was an eccentric and unusual character, he was being accused without proof. [1] This controversy was known as Breendoggle.

In 1963, the same accusations were brought up again: should Breen be be banned from Worldcon because of his molestation of children? That debate was, and now, referred to as Breenagain or more commonly its original title, Breendoggle. [2] and is documented in detail at the Breendoggle Wiki. 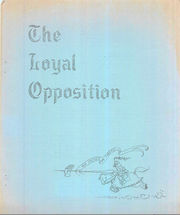 The cover of The Loyal Opposition, a zine published in March 1964 by Bjo Trimble and John Trimble in support of Breen; see entire issue here.

While his actions and behavior with young children, at SF conventions in particular, were criminal, fans likely had no idea that in 1954, Breen had been convicted of child molestation in Atlantic City and put on probation.[3][4] His wife, Marion Zimmer Bradley, however was well aware of them but chose not to report him. [4]

For more on 1963 debate, see The Great Breen Boondoggle, Or All Berkeley Is Plunged Into War.

Ultimately, Breen was banned from Worldcon for 1964 (Pacificon II), and briefly blackballed from the Fantasy Amateur Press Association after allegations of further pedophilic acts surfaced.[4] Nevertheless, many prominent fans of the era (including big-name fans Bjo Trimble and John Boardman), perhaps unaware of Breen's prior conviction, dismissed the allegations as hearsay and "character assassination," and the scandal blew over.[5]

This Was Not the End

But his crimes and activities did not stop in his 1964 ban from Worldcon.

In 1985, Breen began grooming the eight-year-old stepson of author Stephen Goldin, having met the child at a science fiction convention. He continued to molest him for five years. He was arrested for it in 1989, accepted a plea bargain and was put on probation. That same year, he met another boy at another convention and began molesting him. He was arrested for this on October 3, 1991. He was charged with eight felony counts of child molestation and was sentenced to ten years in prison. [6] [7]

Again, some prominent members of the numismatic community dismissed or minimized the seriousness of Breen's actions, and did not think they warranted expulsion from the American Numismatic Association. He is still a controversial figure in the coin collecting world.[7]

Some of his legal troubles are discussed in Darkover Newsletter.

In a discussion about the Ordo Templi Orientis lodge, ceremonial magick, and English occultist Aleister Crowley as a child molester, longtime fantasy/SF artist/editor/publisher Cat Yronwode revealed her experience with Breen as well as with other child molesters in Bay Area science fiction fandom:

One of the very early members or co-founders of NAMBLA [ North American Man-Boy Love Association ] was Walter Breen. The former husband of the science fiction author Marion Zimmer Bradley, he was also an expect on early American numismatics, and the cause of the so-called "Breen Boondoggle" which ripped apart Bay Area science fiction fandom in the mid 1960s when he was caught sexually molesting a young girl and was barred from the World Science Fiction Convention in Oakland. Around the same time, Breen stole rare first edition copies of Aleister Crowley books, magazines, and manuscripts from my parents' antiquarian bookstore in Berkeley, including a first edition of "777"[8] -- and he was subsequently barred from entering most Bay Area rare book stores because he was a known book thief. (We had gotten the Crowley material when we purchased in its entirety the library of the deceased Mistress of the Lotus Lodge of Oakland, California,[9] whose name i have forgotten, along with her ritual robes and tools, and so forth; she had been a friend of Crowley's and he had sent her many items gratis, including a small, colourful catalogue of the 1940s exhibit of Frieda Harris's original paintings for the Thoth deck at a London art gallery, which i kept for lo, these 35 years, until i presented it to Frater Nigris in celebration of our falling in love.) Walter Breen was eventually convicted of child sex abuse by testimony taken from parents in the local coin collecting community, not in fandom or the thelemite community, and he died in prison. Another former NAMBLA member and close friend of Breen's was the Bay Area science fiction fan and "free love" exponent Jefferson Poland, a.k.a Jefferson Fuck Poland, a.k.a. Jefferson Clitlick Poland. He too was convicted of child sex abuse and spent time in the slammer. He is now a registered sex offender, forbidden from consorting with children. No, i cannot personally vouch for the fact that every member of NAMBLA is a child sex abuser...but i knew both of those men personally -- and they both were. Their cohort Sandy Cutrell -- by which i mean all three were good friends -- was also a member of Bay Area science fiction fandom in the 1960s. He may not have been a member of NAMBLA, but if not, probably only because his interest was the sexual abuse of *girl* children. He admitted his entire sorry history to me in the mid-1980s, and explained that friends of his had barred him from their house because he gave their young daughter comic books as a bribe so that she would sit on his face. Needless to say, i did not take this confession lightly and i told him he was unwelcome in my house as well. My point: here i knew three Bay Area sex abusers in the 1960s, two convicted and one self-confessed, of whom all three were members of science fiction fandom, two were members of NAMBLA, and one was a self-professed Crowleyite. Am i going overboard here? Is it a coincidence that OTO has had problems with NAMBLA members (in the Bay Area?) per Bill H[eidrick, Kaballah scholar and former OTO treasurer]? Who knows?[10]

Those defending Breen did so for a variety of reasons. One of those was that while while Breen's behavior was known to some, many, if not most, fans were unaware of them. Other fans defended his actions, fearing that turning on one of their own did not honor the science fiction community's tolerance for "odd" or things that were not mainstream. There was much discussion over whether science fiction/fantasy conventions could or should ban anyone at all, for any reason, reasoning that these were meant to be inclusive gatherings of people who were different from the mainstream.

Other fans were concerned that by revealing Breen's activities, the harsh light of the mundane, non-fannish world would be shone upon them. It is also important to note that when the 1960s discussions were taking place, it had been only ten years after Senator Joseph McCarthy's political fervor and accusations, including against gays and Jews; and as a result, it was likely that fannish tolerance for unsubstantiated accusations was very low.

Moreover, attitudes in the 1960s regarding consent, minors, sex were different enough than they are now. This mean that while some fans were shocked and disgusted by the allegations against Breen, others thought that objecting to consensual relations between adults and children was “square." Some seemed to take it for granted that since many children are molested and grow up to live apparently normal lives, it must not be very harmful. Many of these attitudes can be found in statements in the zine The Loyal Opposition.

In 2014, Marion Zimmer Bradley, Breen's then ex-wife, was also accused of sexual and physical abuse of children..