Computer Playback is a gen Star Trek: TOS anthology published in the UK. It reprints fiction that has previously appeared in other zines.

Computer Playback 1, 2, and 3 are put out by Janet Hunt. Each issue is a collection of four to six stories (usually long out of print), by a single author. Gerry Downs is in CP 1. Connie Faddis in CP 2, and Marion Zimmer Bradley (better known for Darkover) is in 3. This is an English 'zine, although Yeoman Press sometimes has copies. The stories are excellent and the production quality is high. The paper is A4, a little longerer than 11 inches, so it doesn't stack as well with the U.S. zines. [1]

At Terracon '77 in Liverpool last year, a number of fans got together and discussed a problem in fandom over here. Specifically the difficulty in getting zines from America to the UK. Due to regulations concerning currency leaving the country, it's very difficult, slow, expensive and frustrating to get issues of US zines across the ocean... No workable ideas came out of those con discussions, but the Existence of Desire was brought to life... The months and ideas came and went and then one one of us came up with a Brilliant Idea. I think it came from getting our copies of Archives, a reprint zine from Yeoman Press... To whit: If we got the stories from the US sent over here, we could reprint them over here, sell them over here, and the money would never leave HM"s shores. Now, in effort to do something just a little bit different in a reprint zine, here is our plan: Each issue of Computer Playback will contain the stories of one US author... We will hope to get out approximately 3 to 4 issues per year and to give you, the reader, the widest possible variety of stories by some of the best US authors in the fandom. 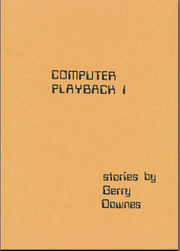 Computer Playback 1 contains fiction by Gerry Downes. It is undated (but published in 1977 or 1978) and contains 59 pages. Art by William R. Peterson (the author's brother), Virginia Jacobsen and Gerry Downes. 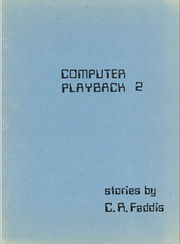 Computer Playback 2 is not dated but was published in 1978 and has 66 pages. It contains stories by Connie Faddis.

It contains one piece of original art by Mike Eason, and the rest of the art is by Signe Landon and Connie Faddis and reprinted from Interphase and The Other Side of Paradise.

You know once I was a normal human being...really....then I saw Star Trek on T.V., discovered Star Trek fandom, and then my great downfall...fanzines. I'm totally addicted to then now. Because of the currency regulations its very difficult to get hold of american fanzines for the British fen, so in a spirit of anglo-american detente Ruth and I got together with the idea of reprinting the best of stories from american zines. So 'Computer Playback' was born, our plan is to reprint stories, where ever possible concentrating on one author at a time and producing 3 or 4 zines per year, (we nope to do an X rated adult zine in the summer). The zine is primarily for sale in Britain but we also accept orders from overseas. Any suggestions for stories you would like to see reprinted would be welcomed.

This leaves me with just one problem, my fanzine addiction, perhaps I could distill the essences of fanzines down to a liquid for injection directly into the bloodstream, so by-passing my eyeballs!

See reactions and reviews for The Third Wheel. 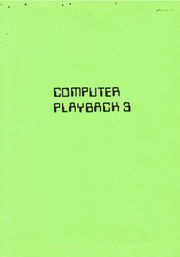 Computer Playback 3 was published in 1979 and contains 59 pages.

The editor writes: "Now a word about CP4. The word is.... "Well?" Ruth will be returning to the US in March of 1980, so Janet will either have to take over the editing of CP on her own, we'll have to do a lot of long-distance communicating (hard enough at our present 90 mile distance, but several thousand?), or we'll have to give up CP altogether."

See reactions and reviews for The Decision.

See reactions and reviews for The Immovable Object.

Computer Playback 4 was published in 1980 and contains 72 pages. 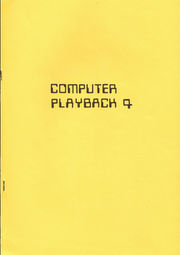 cover of issue #4
From the editorial:

We have some marvellous stories for you, "The Gathering" is a story that gets under your skin, and I'm hoping that Michele will let me reprint some of her other stories.

"Family Affair" is a story set in Starfleet but off the Enterprise, usually I'm not too keen on non K/S/M stories by there is always an exception to the rule and this is it. Devra is very well known for her famous fanzine Spockanalia, the first ST fanzine, which began while the TV series was still being filmed. While fandom owes Devra a huge debt for her fanzines and conventions, I'm sure you will agree that she is also an excellent writer. (She is also very understanding if you stay with her and don't speak, just read. Sorry, Devra, that was very bad manners, can I stay again?)"

"The Healing Time" by Bev and Nancy is a story I read several years ago and its haunted me since.

See reactions and reviews for The Gathering.

See reactions and reviews for The Healing Time. 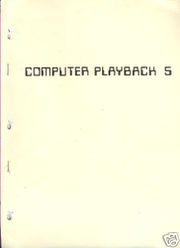 Computer Playback 5 was published in 1981 and is 71 pages long. Art is by Roo, Tim Groome, and Gerry Downes.

See reactions and reviews for Trial by Ordeal. 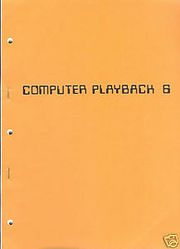 Computer Playback 6 was published in 1982 and is 62 pages long. Art is by Lesley Crowther, Carol Hart, Ann Humphrey, and Tim Groome.