Visit to a Weird Planet 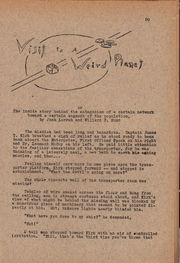 Visit to a Weird Planet is a Star Trek: TOS story by Jean Lorrah and Willard F. Hunt. It has the subtitle: "or the Inside Story Behind the Antagonism of a Certain Network Toward a Certain Segment of the Population."

This story was originally in Spockanalia #3 and reprinted in Computer Playback #5. A sequel, "Visit to a Weird Planet Revisited" by Ruth Berman, appeared in Spockanalia 5.

The main title is a play on words, as it were, on "Visit to a Small Planet," a 1960 Paramount Pictures film which in turn was based on a 1955 play by Gore Vidal. [2] Leonard Nimoy starred in this play in 1968 (shortly before the end of the Star Trek series) at the Pheasant Run Playhouse in St. Charles, Illinois. See the playbill at Spock Hears from the Spock's Scribes #3.

Performed As a One-Act Play

This story was performed as a one-act play in 1976 at Star TreKon.

This story is a very early known example of modern RPF. "Visit to a Weird Planet" sends Kirk, Spock and Bones back to the set of the filming of Star Trek. The three characters meet, among others, Gene Roddenberry. A copy of "Visit to a Weird Planet" as printed in Spockanalia was sent to Gene Roddenberry. He confirms in issue #3 that Spockanalia was "required reading" for him and all those in "the office." [3]

In 2017, Devra Langsam (publisher of Spockanalia) said: "It seemed like an obvious kind of idea. I had no idea that it was one of the first switch kind of stories. I never even thought of that, but it made such good sense that somebody should try it, and both of those stories [the second being: Visit to a Weird Planet Revisited] are very well written." [4]

A Brief Scuffle Over Copyright

In October 1996, the author of the story sent an urgent message out to alt.startrek.creative that someone has reposted the story to a website without permission.

"I have an alert for any of you who have had a story published in a Star Trek fanzine in the past thirty years. Check this website: http://tos-www.tos.net/services/

I found "Visit to a Weird Planet" posted there, and wrote to remind the site owner, [email redacted], that he had not asked for my permission, and that he had omitted the copyright notice. I asked if he had received permission to reprint the story from Devra Langsam, the editor of Spockanalia, where the story originally appeared.

I got a snotty reply that he is one of the founders of the internet and has been on line for ten years, and I am a newbie and therefore have no right to tell him nettiquette. Because he found the story posted somewhere else without a copyright notice (and of course he did not say where he supposedly found it), he had the right to put it on his own site the same way, but he is now removing the story from the site.

Well, that's fine with me. But he has dozens of Trek stories posted. You may want to check the site and see if he has one of yours, and if he does, decide what you want to do about it.

Please feel free to distribute this message anywhere that fans who have had Star Trek stories published in fanzines, or who have edited fanzines, over the past thirty years may see it."

The copyright notice on later issues of Spockanalia read: "Copyright Sherna Burley and Devra Michele Langsam 1968. All rights assigned to the writers and artists responsible for the material. Brief, credited quotations are permitted; otherwise written permission of the writer/artist is required. In that case, it would be appreciated if Spockanalia were credited as the source, and two copies set to the editors."[5]