For the reboot version of the character, see Leonard McCoy (AOS).

Played by DeForest Kelley in Star Trek TOS and subsequent movies, Dr. Leonard "Bones" McCoy served as ship's doctor aboard the starship Enterprise. He provided the emotional voice of the show, concerned with morality and humanity, as a foil to Spock's cold logic. The two operated as opposing angels on the shoulders of Captain James T. Kirk; only with their input could he make a proper decision.

McCoy is established as older than most of his crewmates, having left a career as a medical doctor on Earth to join Starfleet later in life. He is acerbic, and rude to Spock sometimes to the point of xenophobia – banter that Spock can give right back to him. Many fans do not interpret Spock and McCoy's relationship as harmful or hateful: the two have been known to defend each other to common enemies, and even Kirk seems amused by their bickering.[1]

The nature of Spock and McCoy's relationship makes McCoy an interesting addition to the popular Kirk/Spock pair, or an interesting substitution for either primary. All configurations of the trio are popular in slash. 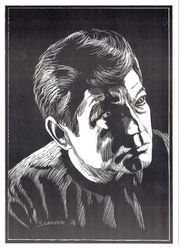 McCoy's catchphrases "He's dead, Jim" and "I'm a doctor, not a [bricklayer, escalator, etc]" are iconic to Star Trek, and to an extent, to pop culture at large.

A Fan's Comments on McCoy in Fanfic

McCoy. Dear McCoy. My favorite TOS character, if I had to pick. Like I said in the previous post on Contact [2], McCoy's Eyes are the single greatest narrative device that has ever existed when it comes to analyzing a fictional relationship in fanfic. McCoy's Eyes are the integral to Kirk-Spock -- he's the perfect storm of intimate familiarity and third-party outside perspective and believable curiosity. And without McCoy's Eyes, I'm pretty sure Kirk/Spock would not have come into existence the way it did. It's insane how much of the fans' attempts to put into words the way they feel about the Kirk-Spock relationship - everything that's fascinating and appealing about them - is done via McCoy, with the fans stepping into McCoy's shoes, putting their words into McCoy's mouth, etc. It's partly a thing because it happens so much in canon -- in various episodes, it was already a built-in narrative device (it happens more than once, though the ends of Amok Time and Requiem for Methuselah are probably the biggest examples) for McCoy to bridge Spock's feelings to the viewer.

He's also fulcrum of so much fannish tension - not so much outright discord, from what I can see, but a mostly unmentioned, but very obvious, push-and-pull between various cohorts of fans. On one hand, the show is persistently oblique about making clear statements about the various relations between Kirk, Spock, and McCoy. Is it more of a Kirk-Spock duo, with McCoy as the most prominent member of the supporting cast? Or is it a Kirk-Spock-McCoy trio, just with very different relationship dynamics between Kirk-McCoy, Kirk-Spock, and McCoy-Spock? It seems to change depending on the episode. Either way, very few Kirk/Spock shippers or Kirk&Spock friendship-focus fans seem to actually dislike or devalue McCoy, but at the same time are mostly interested in Kirk and Spock (good thing McCoy wasn't a woman, or she'd have been bashed and demonized to hell and back, no doubt), leading to a lot of "so, how do we address this issue?" discussions. Plenty are thoughtful and interesting but more often are unintentionally hilarious or irritating (like all fanfic - Sturgeon's Law!). Here are the most popular ones I could think of off the top of my head:

1. "Explaining" how McCoy's relationship with them is just different, making a big detailed analytical manifesto of it.

Result if written well: a fascinating character study about how people's relationships with different people are all unique.
Result if written badly: Methinks The Fan Doth Protest Too Much.

2. Including McCoy or emphasizing his contribution to the triumvirate to go "look, seriously, you guys, he's totally awesome!"

Result if written well: Way of showing that love is an inclusive rather than an exclusive emotion, and the amount of love you feel for one person does not diminish the love you are able to feel for another person.
Result if written badly: So what you're trying to say is, McCoy's worth as a character is entirely predicated on the extent to which Kirk and Spock deign to include him in their friendship?

3. Making all slash into Kirk/Spock/McCoy rather than Kirk/Spock.

It depends entirely on how the fic is written. Narrowness of scope is key, I think. If you find yourself making broad blanket statements that use the words "inherently," "impossible," or "mere," then congratulations, your fic is rude and stupid. Better luck next time! But if you're writing specific scenarios or ideas or emotions where the various facets of human relationships that the above scenarios tie into are at the core of the story, it's much more likely to work well. [3]