''You may also be looking for something else with the title Cordrazine."

It had an emphasis on Star Trek, specifically McCoy. Julie McCoy was the Editor in Chief, Andre Lieven was the Technical and Continuity Editor and Lillian Moir was the Production and Layout Editor.

The art is by Susan Armstrong, Doug Imrie, and Julie McCoy.

A second issue was planned, but never published. 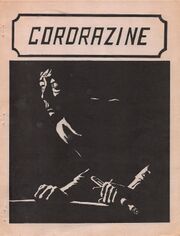 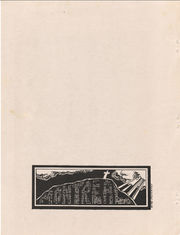 Good ghodl Believe it or not, this zine name has NOT been used before, although apparently there were a few people thinking about it. Probably everyone else concluded it was too obvious (or strange). Perhaps this is true, but after considering names like Rigellian Kassaba Fever (illo: the good doctor in a Travolta stance?), you can bet a name like Cordrazine seemed Muse-inspired.

A couple of patterns showed up unexpectedly when these stories were compiled. One is that, in two separate stories, I have two different characters throwing up. Not that I'm particularly fond of regurgitating, mind you—It grew out of my aversion to hurt/comfort. Pain and sickness are rarely glamourous; usually they're kind of messy. Kirk/Spock/McCoy were always lucky in the series--they got wounds and diseases that did little more than prettily bead their brows with perspiration. Believe me, it's a lot harder to love someone with galloping dysentery. Now, there's a test of friendship.

The second pattern is the theme of the major stories: loneliness. This wasn't planned, either; but it shouldn't come as a surprise. If a starship can function as a community, then it can also harbour individuals who will feel bitterly isolated despite, or because of, all that common-cause camaraderie.

There are two reviews of children's fantasy/magic/SF. Even if you don't have friends or relatives of the right age, it could still be worth your reading—some of the literature, like Gulliver's Travels, has an entirely different, if equally valid, perspective when read by an adult. And if you do, you'll be ready to delight any starry-eyed child who is between Dr. Seuss and Robert Silverberg. After all, we gotta get recruits for the next generation, don't we? As to the stories..."The Pity of Cows" was begun two years ago and lay about for some months until the movie appeared and caused revisions. There is a superficial resemblance to Spockanalia's "Visit to a Weird Planet" (which I came across only last year), but if you go past the first pages you'll find the differences far outweigh the similarities. (No guys, I am NOT going to rewrite it because Marcy Lafferty might be in the series!)

"Broken Rules and Desperate Chances" is a love story which doesn't have the word "love" in it - prompted by exasperation with the conventional perception of what McCoy's wife would be like.

"In the Beginning" is a cautionary fable about hypertechnology. It was written by a 17-year-old student of MIND (Moving In New Directions, a Montreal alternative school), Amal Cowie, and it is her first zine writing.

"The Resurrection of Joe Tormolen" was supposed to be in this issue, but due to space problems it's postponed to the next.

"Holy Bathos, Batman!!" is a parody of the sillier kind of Kirk/Spock hurt/comfort. There are more similarities than you'd think! This one's dedicated to Dr. Hertham... honi soit qui mal y pense.

And then there's "Cheap Trills". Meet the Dark Side of the Tribble!

Well, here it is. After four years, and fifteen cons, I'm finally working in fandom...on a zine...on a GOOD zine. In fact, when we decided to do this, we figured that we could learn from the ground covered by zines we'd read. You know, all the tales of late zines, zines that weren't ready for the con they were planned for, and so on. WE weren't going to do that. WE were going to have a healthy margin of time. So, why did I write this (and rewrite, as well) less than three weeks before cons that we planned to have this at? Why did the bulk of the zine have to be typed non-stop over two days at Julie's? Now I know why newborn zines are usually Caesarean sections. In zinedom, there does not seem to be such a thing as natural birth.

But, the craziness that happens when you're rushing to get the mechanical parts together is unique and fun. It looks like a total mess, but it's all falling into place through the fog. This may be a reason (one, anyway) why people do this sort of thing.

A couple of points to make: I'd like to thank Starbase MTL for helping me get into fandom. In fact, I met two of our main contributors through the club. Thanks, guys, for being there. Also the usual kudos to all who worked for getting everything done under terrible pressure (which we're still under now).

On contributions: we like ST material the best, be it serious or whimsical, although good general SF is most welcome. As for Star Wars, if it's different from the usual fare and really explores the characters, then we can talk about it. But no scrods, okay? Also, please type or print. You wouldn't want us to botch a truly great story just because we had to guess at several words.

'Cordrazine' is a Canadian zine with declares itself to be kosher. Tigriffin agrees with their declaration, partly because she is disinclined to argue with people about their religion, but mostly because the introduction, contents, and general production values of this first time zine indicate the editors know the difference between good zine material and chopped liver. This issue contains: 'Cheap Thrills' -- an unusual tale of a crewman's addiction to the effects tribbles have on his nervous system. It bears all the earmarks of a story that started out strictly for laughs, then crossed over to the realm of seriousness in the telling. Entertaining though it is, the reader is left with a craving for something more. If such was the writer's intent, seeing as the story is about cravings, he succeeds admirably. If not, the story needed another rewrite before publishing. 'Broken Rules, Desperate Chances' -- very well told story of the conflicts a professor of philosophy (who is revealed as McCoy's oft-maligned ex with remarkable deftness and good taste) must deal with her folly in suggesting good could come from exchanging ideas with the Klingons. All characters are well-drawn, the action engrossing, and the situations and societies quite plausible. Best of zine award. 'The Beginning and the End' -- an admirable first effort by a promising 17-year old writer who shows a laudable concern for the future of her work. 'Holy Bathos, Batman!' -- universes collide with glee in this hurt/comfort to end all (and wouldn't that be nice?) hurt/comfort story. 'The Pity of Cows' -- the major problem with this story is one common to its genre. The reader requires a large hot air balloon for adequate suspension of disbelief. Other than that, which really cannot be helped, this tale of Kirk, Spock, and McCoy mysteriously appearing in place of their counterparts on the set where the movie sequel is being filmed is clever, fast-pasted, and enjoyable, with a surprisingly warm ending. 'Star Trek Spinoffs' -- 'Whatever happened to good old so-and-so?' is the basis for this brief list of farcical 'new' series showcasing the talents of some former bit players from televised Trek... Other features: this is issue is rounded out with some good poetry, puzzles, a brief filler article on shafu'd space launches and several pages of useful reviews of childrens' sf. All well done. [1]

"Broken Rules, Desperate Chances." - Victoria Owen lectures on Klingnon ethics and philosophy - a dangerous occupation. The Academy sends her on a Sabbatical; her destination - Starbase 29. She also has had a husband at one time...These three elements make an interesting story for McCoy fans. His indomitable ex-wife proves herself just as capable as Kirk - when she rescues him from a Klingnon gaol. 'The Pity of the Cows' - is an updated Visit to a Weird Planet' transferred to 1962. Not too bad but the theme has been used too often to pack any new punches. Pity otherwise. The zine is good, with two longish articles on fantasy literature and poetry from Elizabeth Holden and David Moir. Front and back illos could have been just two shades lighter for clarity. Are there any more zines available from these inventive editors? [2]