From Fanlore
(Redirected from Starbase MTL)
Jump to: navigation, search

Starbase M.T.L. is a gen Star Trek: TOS Canadian quarterly clubzine It has the subtitle: "The Montreal Trekker's Log." There are seven issues. 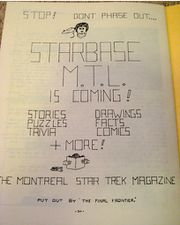 Starbase M.T.L. is a clubzine, and I believe it to be one of the best club 'zines I've ever seen. There is something for everyone, and the editors are always encouraging submissions. The policy has become, starting with issue #6, to reprint one of the better American stories in each issue for the benefit of new fans and Canadian fans who may not have had the opportunity to read some of the earlier stories. Maybe editors of these out-of-print stories can submit them to 'Starbase M.T.L. Ever improving, coming out on a steady schedule, this 'zine will undoubtedly continue to be enjoyable reading. [1]

Issue #6 contains a story, "A la récherche de l'avenir" by Genevieve Lapierre, that is a responsefic to The Rack that was written without permission or approval. In "A la Recherche de l'Avenir", Spock is gay and has a lover, a minor character from the original story. "The Rack's" authors wrote a lengthy personal statement regarding this story in Scuttlebutt #16.

Issues #3 and #4 are good offset reproduction, the layout is nice, the art adequate, and there's enough variety of content to please everyone, but I think the $2.00 plus .50 postage is a bit high for a 22-32 page zine. Club president, Bruce Gilmour, expressed a desire to improve the zine, include more fiction and poetry and will accept submissions from anybody, anywhere. At publication, however, first priority will be given to Canadian club members... I'll echo his plea to all of you North American fen who are keeping your stories locked up in desk drawers. For ALL fen, Stateside included, remember LoCs and constructive criticism is appreciated by every zine ed and lets them know what you want to see. [2]

See reactions and reviews for A Matter of Opinions.

Starbase M.T.L. 4 was published in winter 1978. It has art by Bernard Reischl (front and back covers), Barry Tremaine, Linda Huntoon, and Lorne Shapiro. 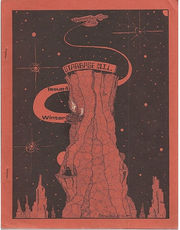 See reactions and reviews for Aftermath.

Starbase M.T.L. 5 was published in 1978 and contains 54 pages. This fanzine contains 16 stories,poems, photos, and puzzles. 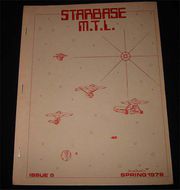 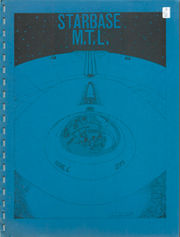 See reactions and reviews for A la récherche de l'avenir.

Starbase M.T.L. 7 was published in Summer 1979, contains five stories and is 76 pages long. Art by Susan Armstrong and Bernard Rischl. 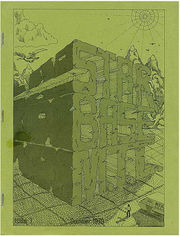