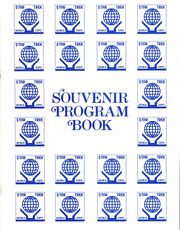 Heash [1] was the Master of Ceremonies. 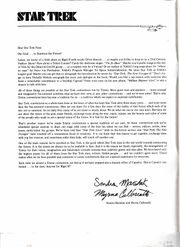 Sondra Marshak and Myrna Culbreath's statement, and some product placement for Star Trek: The New Voyages #2
From a commemorative edition of the program book:

Listen, we know of a little place on Rigel II with exotic Orion dancers ... or maybe you'd like to drop in on a 23rd Century Fashion Show! How about a Talent Contest? Catch the Andorian singer: "I'm So Blue!" Maybe you'd prefer songs in the key of Trek by the Omicron Ceti III group... or a surprise visit by a Vulcan! Or an outline of NASA's long-range plans for "where no man" by Jesco von Puttkamer, NASA's Program Manager for Space Industrialization. He takes Star Trek as NASA's longest goal. Maybe you can get him to autograph the introduction he wrote for "Star Trek: The New Voyages II. "Don't forget to have Nichelle Nichols autograph her story and epilogue in the book. Would you like a rap session with someone who bears a remarkable resemblance to a Starship Captain? Feast your eyes on his new album, "William Shatner - Live','or win a chance to talk with him.

The program book had two full-page illos by Monica Miller, a full-page ad for William Shatner's new LP, William Shatner Live, a trivia contest, photos of Bruce Hyde, William Shatner, Joan Winston, Anna Tornheim Hassan, Issac Asimov, and Heash (Master of Ceremonies), a map of the hotel, and an ad for the Star Trek America that was to take place in September 1978 at the Statler Hilton Hotel.

The program book had sixteen pages. There were four different editions of it: one for Nimoy, Shatner, Kelley, and Doohan. They differed by having a full-page publicity still of the actor and a page with a short bio.

The first blood drive hosted at a Star Trek convention was at this con and was sponsored by the editor of Ambrov Zero, a Sime~Gen con. This con activity was inspired by the blood drives started by Robert Heinlein at science fiction cons.

These conventions, were done at the time by the now-long defunct "Tristar Industries" (it wasn't an "industry" as much as it was a few people who organized things) of Staten Island, which essentially picked up the baton left by Joan Winston's bunch, in 1976. They cost a whopping $15 for the weekend to get into and a staggering $39.00 a night in the mid-town Hotel, at the time called The Statler Hilton (It's now The New York Hotel Pennyslvania, it's original name). I went to this particular con on a very cold Feburary 1978 weekend, with friends Jack Eaton and the now-late Andy Hastings (he passed away about five years ago from a long neurological illness which he suffered from, which he had at the time we went to the convention).

Here's some of the program items. Wow. 2001: A SPACE ODYSSEY in glorious 16mm on the big screen. This was the day when all movies and TV episodes were loaded up on 16mm reel-to-reel projectors. Jack Eaton reminded me of us both seeing the sign announcing 2001 would be shown and, after viewing my previous blog entries for the Arthur C. Clarke painting I was commissioned to do this month, it reminded me of from wence we came, when I saw this program book sitting in a pile of stuff here.

It was a great time. We went to New York City, with virtually no money,a questionable transportation to and from the city, and while we winged it and lived on hot dogs and fast food, it was a grand time. How 30 years can make a difference.

Star Trek America converted me to the ST fan movement. It was a real revelation for a person who had never even spoken face-to-face with a real fan before and who came to the Con with a great deal of trepidation. Instead of the expected unrestrained lunacy, I found calm, self-controlled people who were able to trust and be trusted.

A seat behind the Welcommittee table in the Space Traders' Room is a great vantage point for watching the Con pass in review. I ended up sitting there selling fanzines (for Jacqueline Lichtenberg) for something like eight hours, although I had come to the Con as an ordinary member. I spent the time matching faces with familiar names; watching bemused as Walter Koenig and other Guests slipped by me into the circle of tables; being stuck fast to my post while Leonard Nimoy made a surprise appearance elsewhere; becoming an instant Lichtenberg expert. Saturday seemed to be Star Wars day: hucksters pushing "Jedi light tubes", ubiquitous Brotherhood of Jedi Knights nametags, fervent wishes of "May the Force be with you" on buttons and T-shirts, three Princess Leias, two Darth Vaders, one herd of Jawas with twinkly eyes . . . and the Star Wars theme music being played every ten minutes. It's tiring but fun, as long as you don't mind subsisting on bagels and warm cherry soda!

Among the speakers, I most enjoyed Joan Winston and Isaac Asimov, both of whom are so funny in their own ways. The Anniversary Ball was also enjoyable. A pretty fair magician entertained the tables in our area. The orchestra and its MC were excellent; they played quite a few numbers which didn't require couples to dance-- a boon for us singles. On Sunday night, I only watched part of the lengthy Masquerade, but I did meet some of the participants afterward. They were still in costume and in character, and their dignity and feeling of integrity was overwhelming.

A word to anyone out there who hasn't dared go to a Con because they're afraid they'll get lost in the crowd. I found that a ST Con can be as personalized as you want it to be; it's easy to find yourself in a small friendly group if you make the effort. As for me, I went alone, lost five pounds and my heart to Jacqueline Lichtenberg, and gained some new friends and attitudes that are going to be very important to me. [3]

"I am still recovering from the ordeal of the February Star Trek Con in New York... so while the con is still floating around in my mind, I'll make use of some of my feelings and experiences. This Con was very disappointing from the guest point of view. Because William Shatner was the chief guest, I presume that there was perhaps not enough room in the budget for other major stars. By way of a salve, Bruce Hyde was there to rap and sing with his devoted fans.

Moreover, Dr. Isaac Asimov was there and in his usual inimitable fashion helped to save the day. I never get tired of hearing him talk on his favourite subject, himself. Also, two of our club members added to the frivolity of Dr. Asimov's autograph session. Both of them -- and they shall remain anonymous -- arrived at the autograph table with several items to be signed by the good Doctor. Dr. Asimov usually makes "requests" of the young, attractive women who wish to obtain his autograph.

Our first member asked Dr. Asimov if he would sign her "Foundation." [4] The good Doctor, expecting to see a copy of his famous works, was surprised and delighted when a piece of feminine, intimate apparel was placed in front of him. He did, however, state that he regretted that the attractive young lady was not wearing it at the time. Our second member asked Dr. Asimov if he would autograph the "most valuable thing she possessed." When he agreed, (the good Doctor has rarely been known to refuse a pretty face), she lifted her T-shirt and presented her exposed mid-riff for signing. Dr. Asimov was overjoyed and licking his pen, set out to work with a will. The ultimate egotist, he insisted on kissing this signature upon completion."

Fanzine sales were aided through the efforts of several dedicated Club members. Barry Tremaine, who stayed for extra periods of time at our table, hand coloured advertising flyers to offer as a sales bonus. Melissa Thomas, who wouldn't let anyone leave the fanzine room until they'd examined everything on our table, Bob Quicke and David Wax, who put in a lot of extra effort, were all a tremendous asset to the fanzine sales staff. To everybody who disappeared on both days when William Shatner was speaking and left your Editor to man the fort by himself, I say, "May you run out of money when the new Star Trek movie comes to town." However, I really enjoyed doing it, so don't feel bad for too long. It gave me time to talk to Lori Chapek-Carleton, the editor of Warped Space, which I feel is one of the better zines to be available. [5]