For articles with similar titles, see the Beast disambiguation page. 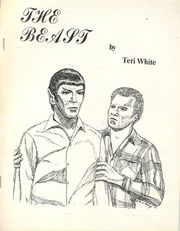 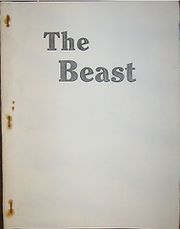 another version of the cover, appears to be a later official one OR a bootleg 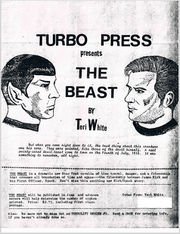 The Beast is a gen 49-page Star Trek: TOS novel by Teri White. It has the subtitle: "A Star Trek Tale." The cover by M.E. Matyi with interior art by Gloria-Ann Rovelstad.

While the author describes the novel as Kirk/Spock, it does not mean it portrays Kirk and Spock as lovers. This is because in the early days of Star Trek fandom, the symbol, "/", (a virgule) between two character's names did not necessarily indicate a sexual relationship, but rather denoted a story that focused on an intensely described portrayal of a close friendship. In the late '70s-early '80s, many fans meant friendship when they spoke of K/S. At this time, the symbol was seen on stories with and without descriptions of sexual intimacy. For more information about the history of the term "slash" and the / symbol see Slash Terminology.

A 1978 summary from the author: "THE BEAST is a dramatic new Star Trek novella of time travel, danger, and a friendship that crosses all boundaries of time and space -- the friendship between James Kirk and his First Officer, Spock. Don't miss this exciting new Kirk/Spock story" [1]

From a distributor many laters later, Agent With Style: "An enthralling hurt/comfort tale of Spock, his mind crippled, stuck in a cage, on 19th century Earth, while Jim Kirk, his captain and friend, desperately searches for him. Could rescue come too late?"

The last page includes some "Moody Blues" lyrics from the song "When You Wake Up":

"When you wake up,
you will find
that you're not where you
left yourself
Now as we speed a little faster
through the stars...."

This excerpt, among other things, contains examples of Telepathic Dialogue Punctuation ("//").

Spock stared at him. //Jim... smiles at me....// Tears overflowed his eyes and ran unheeded down his face. He sank helplessly to his knees. //Once more,// his weary mind said. //Try once more to reach out, to communicate, to say the words that will make this nightmare end.// He looked into Kirk's face, into his eyes, and it seemed that if he tried hard enough, he would be able to see beyond the eyes, into the man. "Jim, I am lonely," he said brokenly. "I want to go home." Half-expecting an attack, he raised one arm in meager self-defense.

Kirk took the pitchfork away from the cringing man and tossed it aside. Then he dropped to his own knees and grabbed Spock by both arms. "Spock, do you remember me?" His own voice cracked with emotion.

Spock looked at him blankly. He lifted one hand and touched Kirk's face, tracing his jawline. "Jim," he murmured, and then smiled as Kirk had only seen him smile once before. "Jim... I called you... I waited... I..." As suddenly as it had appeared, the smile was gone, replaced by a mingled look of pain and fear. A tremor wracked the thin body and Kirk's grip tightened... Exhuastion adruptly overtook Spock and he slumped into Kirk's arms.

This is a Star Trek novella dealing with Spock's accidentally being thrown into the Earth of 1910. His memory is gone, due to a transporter accident, and he is subsequently captured and imprisoned, and turned into "The Beast", a circus oddity for whom his "owner" charges admission to see. The story is well written and captures the emotional turmoil, both of Kirk, who is still searching (even though the accident took place over a year previously) and Spock, whose memories gradually begin to return, and he realizes that somewhere there was a someone named Jim who befriended him. This knowledge leads him to escape from his keeper. The tale then follows Kirk's struggle to get Spock back to the Enterprise after at last finding him, and traces the agonies they suffer while trying to find a safe haven. Spock's memory is still not totally complete, and he is portrayed very sympathetically from Kirk's point of view.

The accompanying artwork is by M.E. Matyi and Gloria Ann Rovelstad, and is, for the most part, nicely done, though for a 49 page story there perhaps should have been a few more drawings.

Essentially "The Beast" is a hurt/comfort and action/adventure story which is very well written and nicely printed. I recommend this to anyone, and especially to newcomers to fan fiction as it is a "psychological" story, which tends to give us new insights into the characters, rather than simply putting them through a series of actions like wooden puppets. In "The Beast" Kirk and Spock live rather than just perform. STORY: 9 GRAPHICS: 7 [2]

This is another K/S story with a pleasant touch of philosophy as well as letting us see the original aspect of the K/S relationship. Due to a transporter malfunction, Spock is sent back to old Earth -- 1910 -- and to complicate things, he has severe amnesia. Kirk finally finds Spock, but since the Vulcan has lost almost all of his memory, his behavior, vocabulary, coordination, and thinking are that of a child, and he relates to Kirk as such. We also get an insight on knowledge of the future versus the ignorance of the past: Kirk as well as Spock are truly aliens on this old Earth. The characterizations and vocabulary of the people of 1910 are excellent throughout the story. This novel is highly recommended for the hopelessly addicted K/S fan. [3]

This starts off well. It's a cross between a longish short story and a shortish novel. This story is well-written and features Kirk searching for Spock in the past, a sort of reverse "Mind-Sifter." It is basically Kirk-gets-Spock, Kirk-loses-Spock, Kirk-gets-Spock-back-again in theme. The first part of the story is well-done, especially the parts from the point of view of the confused Spock. The premise is good although the "bad" humans of the early twentieth century are perhaps a little too cliched. The meeting between Kirk and Spock is well-handled as is their continuing relationship. Unfortunately the story does not follow through on its premise. The most interesting question raised by the story is not how Kirk finds and rescues Spock despite the odds but what happens is Spock's child-like condition is irreversible. Does Kirk give up — his ship and career to look after a simple Spock who is incapable of doing anything at all for himself? Does he try very slowly to re-educate Spock and, if so, does he turn him into a Human or a Vulcan or neither? These are the questions one would like to see answered and which "The Beast" avoids with the deus ex machina device of having McCoy perform an operation and restore Spock to normal. Despite its somewhat frustrating ending and tendency to be overly sentimental, "The Beast" is fun and will appeal especially to "relationship" fans. Illos by M.E. Matyi and Gloria Ann Rovelstad are acceptable but not exceptional. [4]

As you can see by the date, this was one of the early ones. It is not K/S by strict definition, but it‘s definitely pre-K/S. In fact, it‘s so very nearly K/S that it‘s easy to believe the two men get together physically almost immediately after the action of the story is over.

It is the Fourth of July, 1910, when a garishly painted wagon rolls into a sleepy little American town. Inside, behind the bars is a "pointy-eared devil-beast" clad only in a dirty animal skin. The "beast" can only vaguely remember some other place and time when he felt warm and secure. There was one special person there; just a name that he calls to over and over again. That he begs to come find him and take him home.

Months have gone by since Spock‘s disappearance in some sort of transporter accident. The Enterprise has gone back to Earth‘s past twice in an effort to find one Vulcan lost where he has no business being. Starfleet Command has made it perfectly clear that they will allow this quixotic search to go on just one more time. Not that James Kirk has any intention of giving up. He knows Spock is alive. He hears him calling.

To tell you any more than this would be to spoil the story for you. If you‘re a Spock hurt/comfort fan, you can‘t afford to miss this one. [5]

Some of my most favorite K/S stories aren’t K/S stories at all. By the strictest definition of K/S, a sex scene must be somewhere in evidence. This story has none, but if you consider the love between Kirk and Spock as K/S, then this piece qualifies in spades.

Spock is beaming down to Earth to deliver his latest research paper at a major scientific conference when something goes wrong. He never arrives. Kirk and company work frantically to discover where he is and more to the point, when he is. Kirk has gotten permission to return three times to Earth’s past to search for him to no avail. Starfleet has allowed just one more try, not that Kirk has any plans to give up the search. He knows Spock is alive, he hears Spock calling to him. And in 1800s mid-America what do you think the fate of one confused Vulcan who has lost his memory would be? Spock is caged, forced to wear an animal skin and exhibited as a beast for pennies a peek.

Then Spock sees his chance to escape. He overcomes his jailor and runs into the woods sparking a hunt for the “monster”. Kirk and McCoy find out Spock has fled mere minutes too late.

When McCoy is injured, Kirk goes on alone, minus a communicator. He does find his missing first officer, but he is a far cry from the confident, capable man he has known, and Kirk must keep them safe and together while their crew works to rescue them. Danger surrounds them.

I don’t think I’m giving anything away by saying they eventually do get beamed to safety. As McCoy prepares to operate on the Vulcan, Kirk and Spock have the following conversation:

''Spock’s face was solemn, but not afraid. “Will I be able to remember then?”

“Sure,” Kirk said confidently, not looking at McCoy. “And I’ll be waiting right here when you wake up.”

McCoy signaled for an orderly to wheel Spock to the surgical area. A flicker of apprehension crossed his eyes. He clung to Kirk for one more moment. “Jim, don’t go….”

“But it won’t be the same,” Spock said suddenly, sounding almost like himself.”

Kirk stared at him; one hand trailed lightly down Spock’s cheek. “It might not look the same to everybody else, Spock,” he murmured. “But it’ll be the same for you and me. That won’t ever change.”

“I love you.” There was no hesitation in Spock’s words; he spoke with the candor of a child.

McCoy pretended to be busy with his instruments; actually, he was watching Kirk.

The Captain was smiling faintly. “I love you too, Spock,” he said in the same tone that Spock had used.''

Days later when Kirk admits to “hearing” Spock inside his head, Spock also confesses to the same. Kirk knows they will have more to say to each other about this in the near future.

Admirers of the super Vulcan won’t find him in this story, but Spock at his most vulnerable has always appealed to me. And this is one of the best. [6]