You May be looking for Zine Pirating.

A key source of frustration for many theater fans is not being able to see a live show they are interested in because of various physical or financial limitations.

Many professional theater shows are not filmed and made available to the public, or if they are, they are only available through paid subscription services or special screening events at movie theaters. And often, these recordings are only made public several months after the show has opened.

So, many fans turn to bootlegs – illegally recorded videos or audio of shows taken by an audience member. 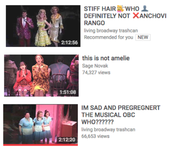 Some online bootlegs are more inconspicuous than others.[1]

Bootlegs on the internet are usually hosted where TPTB cannot easily find them, like on private Google Drives or unlisted YouTube videos.

Most theater creators (writers, actors, producers, set designers, etc) do not like bootlegs. There are many reasons for this: from a legal standpoint, it's because everything on the stage and coming from the stage is copyrighted material. Doing the recording can also be very distracting to actors on stage as well as audience members around the bootlegger. Some also argue that bootlegs, like illegal copies of any other medium, means less tickets sold and therefore less money going to the creators of the show. Creators are also often protective of the way in which their work is seen (e.g. live and professional); there is also the argument that being live-in-person is the thing that makes theater what it is (which cannot be replicated by watching a recording). The last two arguments can be seen in this Tumblr post made by composer Lin-Manuel Miranda:

patiently waiting for a bootleg of Hamilton

I mean it’s been nine whole days what’s the holdup?

[linmanuel]
Here I am. The composer. Actively rooting against you.

[maigaroseiswaiting]
Well then can you record it and post it on CBS or something so that us poor people who can’t afford to pay for a show can have the privilege of seeing it too?

[linmanuel]
Oh, I’ve caused a shitstorm. Sorry. I barely understand Tumblr (I’m much better at the Twitter, I just have an account so I can see the lovely arts n crafts some of you make on here). We’re going to make a really good recording of the show this summer and I want you to hear that. I’m thrilled you haven’t heard a shitty, half-iphone recorded version yet, because I spent 6 years writing this and when you hear it, I want you to hear what I intended. I’m sorry theater only exists in one place at a time but that is also its magic. A bootleg cannot capture it. I’m grateful and glad you want to hear it, and I want you to hear it RIGHT. I ask your patience. This is Lin, by the way. Do I click reblog now? What is th [2]

A big argument for fans who enjoy bootlegs is that theater tickets are expensive and tied to one geographical area, and bootlegs make theater accessible to fans who cannot afford tickets or travelling. Some fans believe that discouraging recording theater is classicist or elitist.

Hmm maybe if musical theatre weren’t made so INACCESSIBLE this wouldn’t be such a huge issue.

Professional filming of shows should be standard and available. Bootlegs aren’t great but the entire world doesn’t have access to broadway or the money to fork over the price tag.[3]

do people understand that bootlegs are the only way many theatre fans are able to see their favorite shows or actors? whether it’s living nowhere near nyc or not having the money to see live theatre, there shouldn’t be any shame surrounding watching bootlegs

the amount of classism in the broadway community is extremely upsetting. if you don’t want bootlegs being spread, then start to take the steps needed for shows to be professionally recorded and shared instead of being locked away from young theatre fans who can’t see shows live [4]

[sarahexplosions]
if Broadway doesn’t want bootlegs floating around then they need to get their act together and make legal recordings. you can say all you want that theater is meant to be enjoyed live, but the fact of the matter is not everybody can get to NYC to go to a Broadway show. not everybody can afford to take the time off of work and buy a plane ticket to NYC and buy a night in a hotel AND get the ticket to the show. people want to see the shows, that’s why there’s a bootleg market in the first place, but it’s unreasonable to expect that everyone has the time, money, and ability to make it out to the one place in the world to see something on Broadway, especially if it’s a limited engagement. so record that shit, slap some subtitles on it, and sell it so we can buy it legally.

[actyourshoesizegirl]
Reblogging this every time I see it. Copyright is important for creators but it should not support cultural elitism. Affordability and accessibility of cultural content is key unless we want to live in a very divided society. [5]

Some fans argue that bootlegs, rather than hurting ticket sales, actually serve to get more fans interested in shows and give them an incentive to see the show live:

[...]I do see that it serves as a tool to get people interested in the shows and the performances. Often it can lead to future tickets or cast recordings being sold because of an exposure to a bootleg recording.

I'm sure some feel it can serve as a replacement for seeing a show, but for some it can also get them so worked up they have to come to NY and see it.[6]